For Crohn’s Patients, Splenda’s Not So Splendid, Equal Equals Trouble

Artificial sweeteners Splenda and Equal may be problematic for people with Crohn’s disease because they appear to promote the growth and adherence of E. coli.

Both sweeteners contain maltodextrin, a common oligosaccharide food additive. Researchers at the Cleveland Clinic’s Lerner Research Institute recently showed that when E. coli, an important trigger of the inflammation in Crohn’s disease—is exposed to this additive, it is much more likely to form sticky biofilms.

In the presence of the two maltodextrin-containing artificial sweeteners, the bacteria grew thicker, stickier and formed biofilms. The bugs were also much more 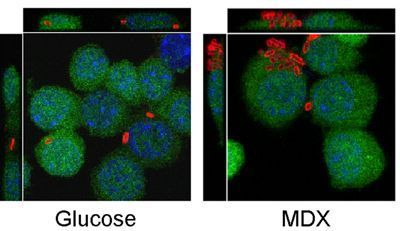 able to adhere to human intestinal epithelial cells and macrophages. This did not happen in the presence of stevia.

The Cleveland Clinic team repeated the experiment with maltodextrin alone and observed a similar pattern of increased thickness and biofilm formation. The NIH-funded study was published on PLOS ONE, and presented at last year’s Digestive Disease Week.

Artificial sweeteners are a common culprit, given how widely they are used, but they are far from the only ones. Dr. McDonald points out that maltodextrin is present most processed and packaged foods.

“These findings demonstrate that the ubiquitous dietary component maltodextrin enhances E. coli adhesion and suggests a mechanism by which Western diets rich in specific polysaccharides may promote dysbiosis of gut microbes and contribute to disease susceptibility,” the authors note.

Anything that promotes the adhesion and growth of E. coli spells bad news for people with Crohn’s. In most people, this bug is confined to the large intestine, but in those with Crohn’s it is often found in the small intestine. The reason for this difference is not yet known, but it is significant because in this disease the small intestine is the primary locus of inflammation in most cases.

While the Cleveland Clinic study certainly does not constitute definitive proof that sweeteners and other maltodextrin foods have a causative or triggering role in Crohn’s, this is certainly a reasonable conjecture.

Dr. McDonald said it makes sense for people with Crohn’s or Irritable Bowel Disorder to try avoiding Splenda, Equal and any foods containing maltodextrin to see if they experience any improvement in symptoms. However, she stopped short of making a firm recommendation until far more research is completed.