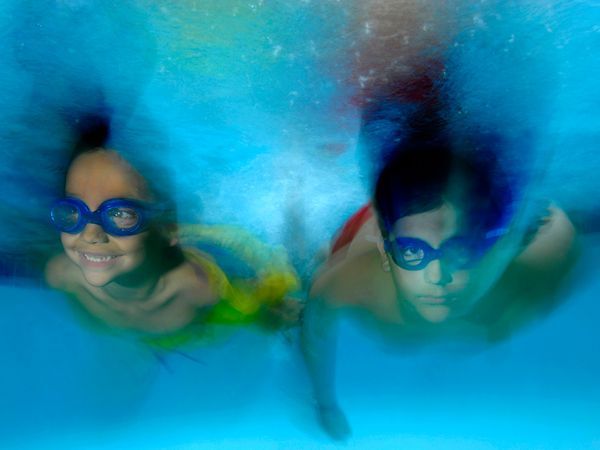 Dr. Bernard has studied chlorine effects in about 2,000 children, aged 5-15, for over a decade. Those who spent 30 or more hours in chlorinated swimming pools before age 3 had triple the risk of dust mite sensitization and airway inflammation.

“The respiratory effects of chlorine on swimmers are mainly caused by irritant compounds in the water or air just at the surface, which swimmers actively inhale as water, aerosols or gases. In backyard outdoor pools, the main irritant is probably free chlorine itself. In public pools, other irritants are released on reaction of chlorine with organic matter.”

“Physicians should recommend to their patients with asthma, to avoid poorly managed pools with excessive chlorine levels. Clues to identifying these pools are a strong chlorine smell in pool air and irritating effects on the skin, eyes or upper airways,” explained Dr. Bernard. In some areas, home tap water may also be problematic.

The effect of chlorine on the airways of young children is not immediate, said Dr. Bernard, which may be why some studies showed no association between chlorinated pool attendance and asthma in schoolchildren.

But chronic airway exposure to chlorine facilitates penetration of irritants. After several years, this facilitates the expression of asthma,” explained Dr. Bernard. Asthma may be a late manifestation of a cascade that begins with dermatitis, eczema, and allergic rhinitis. Earlier this year,  Dr. Bernard’s group published a paper documenting a strong association between exposure to hard water, and chlorinated water and atopic eczema in 358 school-aged children (Chaumont A, et al.  Environ Res. 2012 Jul;116:52-7)

He noted that in most cases, the problem is not an allergy to chlorine itself. But ongoing exposure to an irritant like chlorine opens skin and airways to other allergens. “If you stop training, or go in a different environment, you can reverse asthma symptoms, but the allergic response remains,” said Dr. Bernard.

Swimming pools aren’t the only culprit. Tap water may be problematic too.

“In some places in the US, the concentrations of chlorine or chloramine in tap water can indeed be almost as high as those found in chlorinated swimming pools. The possibility that this can cause some irritation, in particular, on the skin or airways of sensitive people like babies cannot be excluded.” Showering with chlorinated water may also be associated with increased risk of eczema in children.

That said, bathing or showering normally takes less time than a swimming session, and is also normally unaccompanied by urine contamination, which is a major cause of problems in swimming pools, where amines from urine may react with chlorine, creating highly irritating compounds, Dr. Bernard added.

“Overall, the risks for the airways, if any, should be less in the shower than in swimming pools.” But given that 30% of the tap water in US uses chloramine, the possibility that tap water causes some irritation should not be ignored, he told attendees at a Gordon Research Conference held at Mount Holyoke University, earlier this year.

Dr. Bernard and his researchers are currently completing an epidemiological study among competitive swimmers, which is also designed to assess the affect of chlorine on the human testes. His group published a paper last year in the International Journal of Andrology, which showed an association between childhood attendance at public chlorinated pools and decreased testicular function.

“The uptake of chlorination by-products across the skin can be quite significant, and this deserves further studies, in particular among young children with maturating organs,” he explained.

“We should encourage the use of alternative methods of disinfection, such as ozone, hydrogen peroxide, UV, copper-silver, and nano-filtration,” said Dr. Bernard. “If society wants to go on using chlorine, then it should enforce regulations concerning the levels of chlorine and of its derivatives in the water and in the air of swimming pools, as has been done in Germany.”

Use of metals such as copper and silver in swimming pools can provide disinfection without posing any health risk. “Children and adolescents having mainly attended this type of pool have prevalence of asthma and respiratory allergies that are two to three times lower than their peers, who have used chlorinated pools.”