In response to the recent upsurge in concern about the detrimental health effects of the herbicide glyphosate, Kansas-based Great Plains Laboratory (GPL) has introduced a new urine test that allows practitioners to make more accurate assessments of patients’ exposure to this widely used compound.

The test’s target groups include individuals who develop chronic diseases either more rapidly or at an earlier age than typically expected. One example might be a 30-year old with Parkinson’s disease, which generally occurs much later in life. Dr. Shaw notes that “anyone with a severe chronic illness who is not getting better using traditional methods” may also be a candidate for the glyphosate test, as would patients with signs of metal toxicity.

First marketed as a commercial product in the mid-1970s, glyphosate now has the dubious honor of being the most widely sprayed synthetic herbicide in agricultural history. For years, prevailing scientific consensus was that the weed killer was harmless to humans — but increasing reports of toxicity associated with glyphosate exposure suggest otherwise. Intensive and extensive use of this herbicide has been linked to an alarming assortment of modern diseases.

Engineered to withstand glyphosate, RR plants can be treated with the herbicide without harm, while any nearby weeds or other plants are destroyed. In 1996, RR soybean, corn, and cotton varieties were approved for planting in the US; today, Monsanto’s lineup of GM Roundup-resistant crops also includes alfalfa, canola, sorghum, sugarbeets, and wheat (Benbrook, C. Environ Sci Eur. 2016; 28:3. DOI:10.1186/s12302-016-0070-0).

Glyphosate’s herbicidal properties derive from its ability to interrupt a metabolic route known as the shikimate pathway. While the shikimate pathway is present in plants as well as bacteria, fungi, and algae, it doesn’t exist in animals. In plants exposed to the herbicide, this pathway — essential for the synthesis of the essential aromatic amino acids, phenylalanine, tyrosine, and tryptophan — becomes disrupted, ultimately killing the plants.

The absence of the shikimate pathway in human cells formed the basis of researchers’ and manufacturers’ early assumptions that glyphosate isn’t dangerous to us or to other mammals.

Concurrent with glyphosate’s soaring popularity in both agricultural and backyard gardening settings, many regulatory bodies have weighed in on the herbicide’s safety. Unsurprisingly, Monsanto claims that “authorities worldwide have concluded that glyphosate, when used according to label directions, does not pose an unreasonable risk to human health, the environment, or non-target animals and plants.”

According to the US Environmental Protection Agency, glyphosate has low toxicity for humans, is “no more than slightly toxic” to birds, and is “practically nontoxic to fish, aquatic invertebrates, and honeybees.” Certain glyphosate products, the Agency adds, do “contain an ingredient that is toxic to some fish.”

So the official position is that glyphosate is one of the least noxious herbicides available.

But a review of the scientific literature reveals numerous environmental threats stemming from intensive glyphosate application. For example, heavy use can contribute to the development of resistant crop varieties. Annett et al. argue that reliance on glyphosate as a primary weed control method promotes weed resistance, which in turn prompts growers to apply increasing amounts of herbicide from year to year in order to combat harder-to-kill weeds (Annett, R. et al. J App Toxicol. 2014; 34(5): 458–479).

Additionally, in environments where genetically modified herbicide-resistant crops dominate, biodiversity dwindles, reducing the number of insect and bird species in those ecosystems. In one case, researchers linked increased glyphosate use in conjunction with genetically modified glyphosate-tolerant corn and soybean crops to a large decline in milkweed in the Midwest. This,  they argued, resulted in a significant decrease in the local monarch butterfly population (Pleasants, J. & Oberhauser, K. Insect Cons & Divers. 2013; 6(2): 135–144).

Butterfly die-offs may be tragic, but they hardly constitute a public health crisis. If the authorities have deemed glyphosate safe for human exposure, why are so many people concerned?

Over the last decade, a number of scientists have begun to question the long-term impacts of glyphosate not just on environmental health, but on human health as well. In March of last year, the World Health Organization’s International Agency for Research on Cancer (IARC) sent shockwaves through the scientific community with its assessment of the carcinogenicity of five organophosphate pesticides, including glyphosate, which it classified as “probably carcinogenic.”

Among the IARC-cited research was a meta-analysis of epidemiologic studies indicating a strong positive association between non-Hodgkin lymphoma (NHL) and occupational exposure to glyphosate in agricultural settings. “Striking increases in the incidence of [NHL] cancer have occurred in the last 30 years,” its authors write, “and interest in identifying environmental and occupational exposures associated with this cancer has accompanied this trend” (Schinasi, L. & Leon, M. Int J Environ Res Public Health. 2014; 11(4): 4449–4527).

Researchers also point to glyphosate as a culprit behind a recent rise in the prevalence of chronic kidney disease in regions of South Asia (Abraham, G. Clin Kidney J. 2016; 9(1): 135-141).

Findings like these raise important questions about the previously overlooked human health risks. Does this herbicide present the same hazards to those who don’t live or work in heavy agricultural areas? If so, what are the risk factors for exposure? 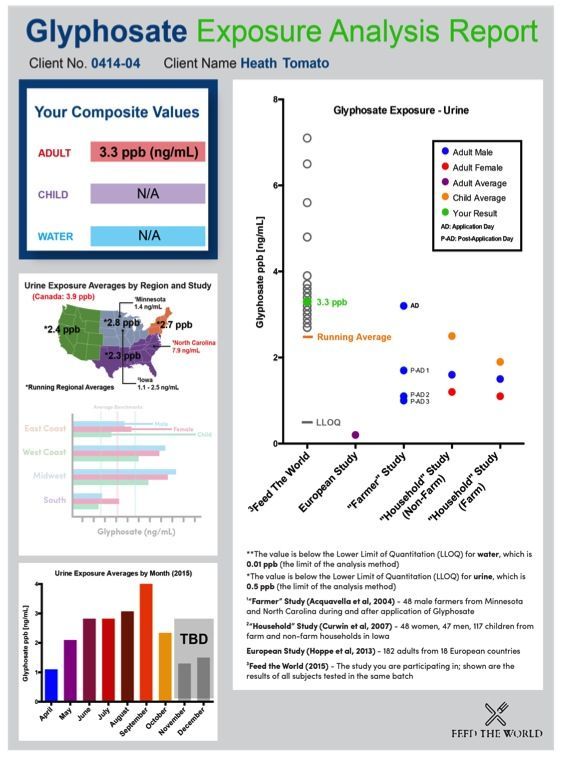 Many speculate that the consumption of glyphosate-contaminated foods is a key cause of poor health not only among farm workers, but within the population as a whole. It’s known that glyphosate residues are present in many staple foods — principally sugar, corn, soy, and wheat.

According to the early results of a unique public testing project recently conducted at the University of California San Francisco (UCSF), contamination rates are surprisingly high; glyphosate was found in a staggering 93% of urine samples collected from study subjects. The UCSF researchers note that tap water, which they also tested, was free of glyphosate residues, indicating that contamination likely stems from either dietary intake or environmental exposure.

The project started in 2015 and is the largest glyphosate biomonitoring urine study conducted in the US to date, with full results expected later this year.

Contaminated animal feed is another potential source of exposure. Throughout the world, livestock farmers use GM crops to feed their animals. Glyphosate residues can then transfer to humans who eat the meat or dairy products derived from those animals.

The residual exposure, some researchers argue, could play a key role in the development of a broad range of chronic illnesses including inflammatory bowel disease, obesity, ADHD, autism, depression, Alzheimer’s disease, Parkinson’s disease, ALS, multiple sclerosis, infertility, and developmental malformations (Samsel, A. & Seneff, S. Entropy. 2013; 15(4): 1416–1463). There are also correlations between high glyphosate exposure and cancers of the thyroid, liver, bladder pancreas and kidney.

One explanation for glyphosate’s ability to wreak havoc in the human body lies in its potential disturbance of our intestinal microbiome. Like plants, bacteria contain the shikimate pathway — the metabolic chain reaction arrested by the herbicide — and they are similarly affected by glyphosate exposure.

Mounting evidence suggests that maintaining a balanced gut flora is a critical component of overall health and wellness. Glyphosate may impact our intestinal integrity by decreasing amounts of certain beneficial bacteria, while fostering overgrowth of harmful bacteria. This phenomenon has been observed in poultry. Scientists found that some highly pathogenic bacteria — including strains of Salmonella and Clostridium — are highly resistant to glyphosate, while other “good” bacteria such as Lactobacillus species, Enterococcus faecalis, Enterococcus faecium, Bacillus badius, and Bifidobacterium adolescentis were susceptible to it (Shehata, A. et al. Curr Microbiol. 2013; 66(4): 350–358).

Imbalances in the intestinal microbiome are implicated in a vast array of disorders, and some scientists point to glyphosate-induced gut dysbiosis as a possible common cause. In just one example, it’s hypothesized that abnormal bacteria can influence the development of autism; researchers argue that an abundance of Clostridia and/or Desulfovibrio and decreases in Bifidobacteria may be involved in autism pathogenesis (Heberling, C. et al. Med Hypoth. 2013; 80(3): 264–270).

Reflecting the growing concerns surrounding glyphosate’s health risks, several regional and national bodies now limit — or in some cases, outright ban — its use.

The Pesticide Action Network provides a global listing of glyphosate restrictions by country. Many European countries prohibit certain applications of this herbicide; the Netherlands, for instance, doesn’t allow any non-commercial glyphosate use, and many municipalities in Belgium are slated to become entirely pesticide-free by 2017. In Canada, 8 of the country’s 10 provinces in some way restrict the use of “non-essential cosmetic pesticides,” including glyphosate, which cannot be used “in public spaces or by the public out-of-doors.”

Great Plains Laboratory’s new test is an important first step in enabling clinicians to more accurately assess the burden of glyphosate exposure. The test is simple, requiring just 10 mL of first morning urine, preferably before the patient takes any food or drink. The lab does require that patients taking the test refrain from eating or drinking any soy or soy-based proteins for one week prior to urine collection.

Most clinicians who have started using the glyphosate test generally combine it with GPL’s Toxic Organic Chemical Profile, a test panel that screens for the presence of nearly 200 different toxic chemicals.

Glyphosate may not be as safe as the initial scientific consensus would have us believe, and it has certainly come under greater medical scrutiny in recent years. But GPL’s Dr. Shaw cautions against over-simplifying the situation. Glyphosate, he says, is only one of many harmful environmental elements that may hasten disease development.

“We’ve found a wide range of toxic chemicals in families with autism,” he stated, “and other chemicals are much higher in populations with autism as compared to normal individuals.”

Dr. Shaw added that when it comes to GM crops, the biggest concern isn’t so much that they’re genetically modified per se, but that they’re engineered to withstand huge amounts of herbicides containing multiple toxic chemicals all at once. With the global increase in GM herbicide-resistant crop planting, larger and larger portions of the world’s food supply will become simultaneously contaminated — not just with glyphosate, but with all the other compounds contained in those herbicides.

This biochemical reality is far from simple, and it can be challenging to determine which specific compound is “responsible” for which specific adverse health effect. It is equally difficult to make long-term predictions about health risk based on relatively short-term studies.

One thing is clear: widespread glyphosate use will likely continue for years to come. We will need to deepen our understanding of the full range of its ecological and human health impacts. Until then, existing evidence indicates that avoidance, guided by careful chemical testing, along with eating organic foods, and advocating for small-scale sustainable agriculture, may be the safest strategy.