On its iconic white cups, Starbucks urges consumers to “help us help the planet.” But in recent years, the coffee shop mega-chain has come under fire for its allegedly eco-unfriendly approach to recycling. 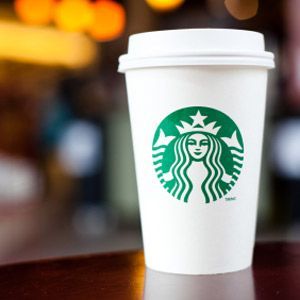 “We want our cups to be recyclable in both material and practice,” the company claims on its website, where it states a “commitment to lead the entire industry toward greater access to recycling for cups and other packaging.”

Materially, the company is off to a good, albeit modest, start. Its paper cups are produced from 10% post-consumer recycled fibers.

But in practice? Suffice to say, there’s a long way to go.

Worldwide, Starbucks sells 4 billion disposable cups each year, the vast majority of which cannot be recycled in most places.

It’s the plastic coating inside Starbucks’ white hot cups that makes them difficult to recycle. The cups are lined with low-density polyethylene plastic, which must be removed in order to recycle the paper portion of the cup. While paper-plastic separation technology does exist, demand for it is low, so the cups aren’t accepted by most paper recycling systems.

In 2008, Starbucks set an objective to provide front-of-store recycling by 2015 for customers at all of its company-operated locations. The coffee chain’s 2013 Global Responsibility Report, however, reveals limited progress toward reaching this lofty goal. By 2013, just 39% of Starbucks’ company-operated stores in the United States and Canada had instituted front-of-store recycling.

Due to a “lack of demand for cup material by the recycling industry,” Starbucks says, many of its locations “don’t have the infrastructure in place to handle collection, hauling and processing” of recyclable products. Matters are further complicated for stores operating out of leased spaces, where recycling may be dependent upon landlords who control waste collection.

With thousands of locations throughout the globe and variable conditions across cities, the company states that it is challenging to “efficiently and effectively implement uniform recycling strategies.”

At some stores, Starbucks cups can be composted — though their plastic liners raise questions about contributions to greenhouse gas emissions. And while the company has identified the promotion of personal tumbler use among customers as another way to encourage sustainability, just 1.8% of its beverages sold in 2013 were served in reusable mugs.

Critics of the company’s recycling practices argue that as the world’s largest coffee chain, Starbucks has the financial wherewithal to better meet its own recycling goals. Additional resources could be devoted to establishing localized recycling practices or to developing alternative packaging materials, such as recyclable bio-based plastics. What’s missing, some claim, is the profit motive to encourage larger-scale change.

For many coffee drinkers, Starbucks is an easy go-to for caffeine refills. Its ubiquitous, nearly identical locations can be found inside a growing number of gas stations, shopping malls, airports, and hospitals. But if more consumers understood the life cycle of a Starbucks cup, they might think twice about where to buy — and trash — their lattes.