According to research published earlier this year in The Lancet Neurology, cannabidiol (CBD) — a compound found in marijuana — can lower the frequency of seizures in young patients with treatment-resistant epilepsy.

This publication is just a single example of numerous recent studies pointing to meaningful therapeutic benefits of cannabis and cannabis-derived products. 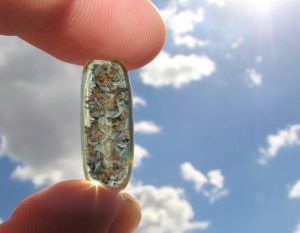 The marijuana plant contains over 80 constituents called cannabinoids, several of which are used medicinally to treat a broad assortment of health conditions. Cannabidiol (CBD) is among the most-researched cannabinoids, and it’s widely regarded as one of the plant’s most powerful healing elements.

Unlike tetrahydrocannabinol (THC) — the other major cannabinoid in marijuana well-known for inducing anxiety and other psychological symptoms — CBD is non-psychoactive. Its sedative and anti-anxiety effects contribute to its pharmacological benefits, without causing the THC-induced “high” often associated with marijuana consumption.

Others have demonstrated that CBD can alleviate psychotic symptoms associated with severe brain disorders. Evidence suggests its potential use as an “effective, safe and well-tolerated alternative treatment for schizophrenic patients” (Zuardi, A. et al. Braz J Med & Biol Res. 2006; 39: 421-429).

There are many CBD studies highlighting the compound’s efficacy in treating various neurological disorders. This makes some mechanistic sense, since the brain and the spinal cord contain cannabinoid receptors, and many scientists have targeted these receptors in an effor to find treatments for multiple sclerosis, Huntington’s and Parkinson’s diseases, Tourette’s syndrome, dementia, chronic pain, epilepsy, and other neurological conditions (Consroe, P. Neurobiol Dis. 1998; 5(6): 534–551).

CBD’s anti-convulsive actions in particular have garnered it a good deal of attention in the field of epilepsy research.

In the new study published earlier this year, investigators explored the effectiveness of CBD use in children and young adults with treatment-resistant epilepsy. This was an open-label trial including 214 patients whose presentations included Dravet syndrome, a severe form of childhood epilepsy that often fails to respond to anti-epileptic drugs or other available treatments, and Lennox-Gastaut syndrome, another serious early-onset form characterized by multiple different types of seizures.

Recruited from 11 different epilepsy centers across the US, participants ranged in age from one to 30 years. All had been taking stable doses of anti-epileptic medications prior to enrollment.

During the trial, the patients took a pharmaceutical form of oral CBD called Epidiolex (GW Pharma) at 2 to 5 mg/kg per day, adjusted until intolerance or until they reached a maximum dose of 25 mg/kg or 50 mg/kg per day (depending on study site allowances). The researchers’ primary aim, they note, was to establish CBD safety and tolerability.

Seizures Down by One-Third

The researchers also reported that CBD had a very favorable safety profile. It was generally well-tolerated by patients, with relatively small numbers of subjects reporting adverse events, such as drowsiness (25% of subjects), decreased appetite (19%), diarrhea (19%), fatigue, (13%), and convulsion (11%).

These significant results, the investigators argue, hold great promise for the potential of CBD to safely and effectively reduce seizure frequency in children and young adults whose epilepsy treatment options are otherwise limited.

That said, the Lancet study’s lead author, Orrin Devinsky, MD, a neurologist at New York University’s Langone Medical Center, is critical of parents who take it upon themselves to treat their epileptic children with marijuana.

In a commentary posted to Science Daily late last year, Devinsky stated that he “empathize[s] with parents who are looking for answers and will try anything to help their children suffering the devastating effects of intractable epilepsy.” He cautions, however, that, “we must let the science, and not anecdotal success stories and high media interest” lead our conversations around medical cannabis use.

“Taking CBD in a controlled medical setting is vastly different from going to a state where medical marijuana is legal and experimenting with dosing and CBD strains,” he added.

Given the favorable results of his and other initial cannabis studies, he believes that larger randomized, controlled trials are warranted to deepen our understanding of the potential for CBD as a treatment of intractable epilepsy and other seizure disorders.