Just weeks after ordering big-box giants Walmart, GNC, Target, and Walgreen’s to stop selling some of their “store-brand” herbal supplements, New York Attorney General Eric Schneiderman furthered his assault on herbal products by ordering major manufacturers to turn over data on the authenticity and purity of the products they make. 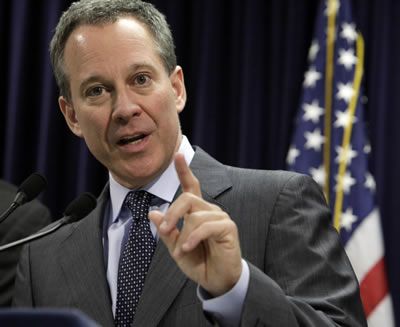 The targeted companies include some of the major players in the supplement industry: Pharmavite, NBTY, Nutraceuticals Corp and Nature’s Way.

The information requested from the manufacturers by March 13 includes:

Schneiderman’s actions, presumably driven by what the AG perceives as a public safety motive but questioned by many in the holistic field, has ignited a firestorm of controversy.

None of the companies, products, or retailers in question have been linked to reports of harm or malfeasance. The analytic methods used by the AG’s office to justify the bans and investigations have been seriously challenged, and further, the AG’s actions appear to be stepping into the jurisdiction of the FDA and FTC.

The controversy raises important questions about the reliability of budget-priced herbs, and Schneiderman’s move raises significant questions for anyone who recommends or uses dietary supplements.

On first glance, the situation seemed simple: the AG’s staff obtained off-the-shelf, store-brand Ginkgo, St. John’s Wort, and other popular herbals sold at multiple big box locations in the state, then hired an analytic lab to test if the products contained what was on the labels.

In a scathing accusation issued on February 2, Schneiderman’s office claimed that four out of five products tested did not contain any of the herbs on the labels. The AG deemed the products fraudulent at best, potentially harmful at worst.

A post on the AG’s website states that, “Overall, just 21% of the test results from store brand herbal supplements verified DNA from the plants listed on the products’ labels — with 79% coming up empty…or verifying contamination with other plant material.”

Cease-and-desist letters accompanied the test results, ordering an immediate stop on sales of 28 items in GNC’s “Herbal Plus,” Target’s “Up & Up,” Walgreens’ “Finest Nutrition” and Walmart’s “Spring Valley” in-house lines. The letters allege the retailers were engaged in “deceptive business acts…and false advertising.”

Two weeks later, on Feb 13, the AG’s office filed subpoenas demanding that the four big box chains turn over the scientific evidence to support the structure-function claims on the product labels. In doing so, the AG has clearly stepped into FDA jurisdiction, a move that some say is an overstep of authority.

This is the first time a state law enforcement agency has taken direct action against major supplement retailers for alleged fraud. All four retail titans have complied with the orders, though GNC has vigorously contested the AG’s conclusions.

Following Schneiderman’s actions, a front-page article in the New York Times, and a blitz of nationwide media coverage questioned the quality and veracity of private-labeled store-brand herbs. By extrapolation, much of the media also questioned the validity of herbal medicine in general.

A scolding letter from the Times’ editorial board insinuated that fraud is, “a problem that infects the entire industry,” and suggested that federal legislators take the AG’s allegations as a wake-up call for stronger supplement regulation.

A Role for Clinicians

The AG’s action does raise legitimate issues about transparency in the production of supplements, especially those made by unnamed contract manufacturers and sold as low-priced, no-brand “value” lines.

It also underscores the need for good clinical guidance in helping people choose supplements. All-too-often, busy practitioners—even those who routinely recommend supplements–leave patients on their own when picking brands.

Holistic Primary Care’s 2014 survey of 549 primary care clinicians indicates that while the vast majority (91%) recommend some supplements, 25% of those who do recommend are not recommending specific brands. They give general advice (ie, “You should take a probiotic”) without steering patients to any particular product. For many people, the choice will come down to which product is cheapest—not which has the strongest quality assurance.

That said, it is premature to categorically vilify store-brand products.

From a scientific perspective, the New York AG’s allegations of fraud are questionable.

At issue is the validity of DNA Barcoding—the testing method used by Dr. James Schulte II, the Clarkson University biologist who oversaw the AG’s supplement analyses, and by Beckman Coulter Genomics, the contract lab that did the tests.

The principle behind DNA Barcoding is straightforward enough: Any organism—plant or animal—will produce genetic markers unique to its species. Presence of an organism’s “barcodes” in a test sample means that the material in question was derived from—or includes derivatives from—that plant or animal.

DNA Barcoding, developed at the University of Guelph, Ontario, is widely used for taxonomy in academic research, and in many industries for confirming identity of plant or animal raw materials.

The question, however, is around the meaning of a negative finding: Does the absence of an organism’s DNA signature guarantee that the sample was NOT derived from that organism?

In the case of herbal extracts—such as tinctures, hot water extracts, or CO2 extractions–bioactive compounds are typically pulled out of plant tissue and no cellular material may be left in the finished product. Further, processing and heating of plant material during manufacture can also denature DNA, making it undetectable.

A negative DNA barcode test on an herbal extract may simply mean that there was no plant DNA in the sample.

By analogy, a sample of orange juice strained of pulp or solid matter might not contain any DNA signatures from Citrus sinensis. This does not mean that the sample was not from an orange, explained James Neal Kababick, director of Flora Research Laboratories, an analytical lab specializing in botanical identity.

The trade groups contend that a large portion of the products tested by the AG’s office—upwards of 70%–were extract-based, and would not likely contain plant cellular material, though they may contain bioactives not detectable by DNA barcoding.

In essence, they argue that the AG’s actions may be based on false-negative test results, and that the AG’s office took a “shoot first, ask later” approach to enforcement.

Methodological objections from an industry under attack should come as no surprise. But at least one self-avowed supplement critic—Harvard Medical School’s Pieter Cohen, MD—has also challenged DNA Barcoding in this context.

In a comment cited on the Genetic Literacy Project blog, Dr. Cohen- who has never hidden his disdain for what he views as an unregulated and unscientific industry—notes, “I don’t recall ever seeing eye-to-eye with GNC but on this DNA barcode question I do.”

An unnamed FDA official is also on record in The Tan Sheet stating that, “the FDA does not currently use DNA sequencing for dietary supplement ingredient verification.” FDA itself has not made a formal statement on this matter, and has been noticeably quiet about the AG’s enforcement action.

Schneiderman’s office has not responded to questions about methodology, has not released the actual data from its tests, and declined to comment for this article. Dr. Schulte, who quarterbacked the AG’s tests, also demurred.

Incidentally, Dr. Schulte is a reptile biologist (“The ultimate goal is to reconstruct the tree of life…My favorite group is lizards and snakes, and I use DNA to trace their branches,” says his Clarkson faculty profile). Many in the field have questioned why the AG chose Schulte when there are many well-qualified analytical chemists with strong botanical experience.

The proper way to analyze herbal products, say industry experts, is to use a combination of techniques that could include mass spectrometry, high-performance thin layer chromatography, gas chromatography, near-infrared spectroscopy, NMR spectroscopy—and in some cases DNA barcoding.

In short, no single test—no matter how sophisticated—is reliable on its own.

The more processed an herbal product, the more methods should be brought to bear in assessing identity.

“We received over 20 boxes of samples, and we have established a highly secure chain of custody,” said UNPA President, Loren Israelsen. “We have two staffers inputting each sample received in preparation to send to independent labs to test for ID and conformance with the supplement facts panel. So far, we seem to be on track to have nearly 100% of all the affected lots.”

Israelsen says he expects results of the retests by mid-March.

Trial attorneys are not waiting for independent confirmation (or refutation) of the AG’s analytics. The allegations of fraud spurred a rush of lawsuits.

Separate but similar lawsuits–all citing fraud and deceptive trade practices, and based strongly on the AG’s DNA barcode analyses—are in process in Florida and California. More are expected.

Of the four retailers, GNC has been most vociferous in defending its products

Michael G. Archbold, Chief Executive Officer of GNC has stated that, “All GNC products are submitted to rigorous and generally accepted testing before they reach our customers. When industry-wide standards are used to authenticate the ingredients in our products, the results demonstrate they are pure, safe and fully compliant.”

In an official company statement, Archbold noted that GNC has responded to all of Schneiderman’s allegations, providing original pre-market analytic data for the lots in question, as well as data from retests. GNC claims to use “validated, widely used and generally accepted testing methodologies approved by standard-setting bodies, including the United States Pharmacopeia (“USP”), Association of Agricultural Chemists (“AOAC”), British Pharmacopeia (“BP”) and European Pharmacopeia (“EP”).”

For the moment, Attorney General Schneiderman and his staff are polishing their badges, as supplement critics clamor for tighter regulation.

The tables could turn, however, if the challenge to DNA barcoding becomes loud enough, and if independent tests find that some or all of the products in question contain bioactives from the herbs on the labels.

So far, none of the four big box chains has taken legal action against the AG, but that doesn’t mean they won’t.

There’s no doubt the situation has put herbal manufacturers—and the supplement industry in general—on the defensive. But leaders in the field say they see it as opportunity for the industry to address important quality, transparency, and analytic issues that have long gone ignored.

“We don’t know if the methodology used by the AG has any validity or authority. We don’t know if their conclusions are right-on, false, or in between. But all of us have wondered about store brands and the quality of these products simply because of the price points,” said Mark Blumenthal, executive director, American Botanical Council (ABC), during an industry-wide conference call following the AG’s report.

ABC is an independent, tax-exempt, nonprofit research and education organization, whose members represent researchers, health professionals, and many other stakeholders in the international medicinal plant community.

“We can try to defend the industry by denigrating the veracity of the AG’s findings or we can take a deep look and make the efforts we need to make to clean up our own house.”

Some contract manufacturers, Upton says, may not have the inherent botanical expertise to ensure top quality in their herbal products. In terms of validation of plant identity, they may not even know what they’re supposed to be looking for.

One of AHP’s main missions is, “the development of standards of identity, purity, and analysis for botanicals, as well as to critically review traditional and scientific data regarding their efficacy and safety.” AHP has already published monographs detailing extensive standards for identity and potency of six of the herbs under review by New York’s AG.

The group has forwarded these standards in a 54-page document to the AG’s office.

Upton sees a strong distinction between large, generalized contract manufacturers that make whatever clients request, and specialized botanical companies that focus exclusively on herbal medicine, and have longstanding commitments to raising the bar on manufacture, botanical science, and herbal education.

“As an herbal practitioner I need to be able to trust these products. People rely on these products for their health, sometimes for the care of serious conditions.”