Massive Survey Shows Many Clinicians at a Breaking Point

If you’re feeling less-than-cheery about your medical career, you are definitely not alone.

According to a new survey of more than 13,500 US doctors by the Physicians’Foundation, over 80% feel medicine is in decline, 77% are pessimistic aboutthe future, and over half are planning major changes in their practices.

Plans include cutting work hours and number of patients, switching to concierge or direct-pay, working in a non-clinical capacity, and getting out of medicine entirely. Over 50% say they’ve already limited their Medicare numbers or plan to do so. Over 26% have stopped taking new Medicaid patients, none of which bodes well for implementation the Affordable Care Act, which would expand the number of people seeking care.

Doctors cite “too much regulation/paperwork”as their chief complaint (79%), followed by loss of autonomy (65%), lack ofcompensation for quality (59%), erosion of patient relationships (54%), and theovershadowing of patient care by money matters (46%).

The report’s authors note that physicians today spend over 22% of their total work time on non-clinical paperwork, resulting in a loss of an estimated 165,000 full-time equivalents from the physician work force.

Asked what were the main drivers of rising costs, respondents cited: the need to practice defensively (69%), an aging population (65%), cost of drugs (59%), advances in technology (51%), and social conditions like poverty, drug abuse, violence and illegal immigration (44%). Only 3.8% see physician fees as a major cost driver.

State of the (Healthcare) Union

One of the largest surveys of its kind, the Survey of American Physicians purports to be a “state of the union” overview of the medical profession. It was commissioned by the Physicians Foundation, an independent non-profit organization that “seeks to advance the work of practicing physicians and help facilitate the delivery of healthcare to their patients.” The full report is available for download, free of charge, at the Foudation’s website.

The Foundation contracted with Merritt Hawkins, a physician search, recruitment and consulting firm, to reach out to over 630,000 physicians with a 48-item questionnaire. A total of 13,575 doctors responded (2.2%). All 50 states were represented, and primary care accounted for 34.8% of respondents.

In terms of age, the largest subgroup (34.4%) was between the ages of 50-59, suggesting that older doctors are somewhat over-represented in this survey. Nationally, 26% of all doctors fall into the 50-59 years age bracket. Men were also slightly over-represented; 73% of respondents were male, though men represent 67% of all doctors according to the AMA’s master file data.

Caucasian physicians were markedly over-represented: 84.7% of respondents self-identified as Caucasian, versus 54% in the AMA’s master file.

Bearing in mind potential age, gender and racial biases, the key findings of the survey—loss of morale, distress and confusion about the future, frustration with the erosion of patient care, urgent desire for change—are fairly uniform across demographic subsets.

You’d be hard-pressed tofind any Marcus Welby’s or Dr. Kildares’s among this survey respondents. 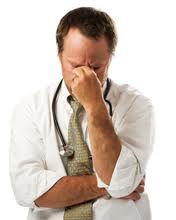 profession and 23% feel “very negative.” Forty-one percent rated their own morale as somewhat negative, and 17% say they are very negative. Forty-six percent are pessimistic about the future, 32% are very pessimistic. Eighty-five percent agree that, “The medical profession is in decline.”

The majority of physicians (58%) would not recommend medicine as a career to their children or other young people, and more than one-third would not choose medicine if they had their careers to do over.

The report’s authors note, however, that physicians 39 or younger are conspicuously less pessimistic and express higher levels of morale than physicians 40 or older. Among those under 40, only 59% felt negatively about state of the profession, versus 70% of those over 40. Primary care doctors tended to be less negative than specialists (64% vs 70%).

That said, the perception that the profession is in decline cut evenly across all demographics.

While the number of doctors who own their own practices is dwindling, independent practice is definitely not dead according to this survey.

Nearly half of the respondents (49%) still own their practices or are partners in a practice, while 44% are employed by hospitals, large groups, or other ownership entities. This is slightly different than national averages. According to Accenture, as of 2009, 57% of all doctors in the US were employed or somehow “owned” by hospitals or large systems, while 43% were in private practice.

But those who still own their practices face major challenges. In the Physicians Foundation survey, practice owners were more likely to hold negative views about the state of medicine than employed doctors (73 vs 62%).

Though other surveys have shown wide and varying attitudes among doctors about the Affordable Care Act(ACA), respondents to this one were decidedly negative.

Fifty-nine percent say they are less positive about the direction and future of American healthcare since passage of ACA. Only 19% are more positive; 22% say feeling hasn’t changed.

Nor have they been sold on the virtues of the Patient Centered Medical Home (PCMH) or Accountable Care Organization (ACO) models. Over 62% said ACOs are unlikely to increase healthcare quality and decrease costs, and that that any quality/cost gains will not be worth the effort.

Nearly 40% say they are uncertain about the structure and purpose of the PCMH model and dubious of its efficacy. Only 8% see widespread adoption of Medical Home as a solution to rising healthcare costs, and only 22% say their clinics are seeking Medical Home or ACO designation.

Though over half of respondents are employed by hospitals, they’re not necessarily happy about it. Forty-three percent strongly disagreed with the statement that, “Hospital employment of physicians is a positive trend likely to enhance quality of care and decrease costs.” Only 4.6% strongly agreed. Thirty-nine percent see hospital employment as eroding the patient-physician relationship.

Nineteen percent view a single payor “Canadian-style” system as a solution for the nation’s healthcare crisis. This view was more prevalent among primary care doctors versus specialists (44% vs 33%), among females than males (43% vs 34%), and among employed doctors than those who owned their own practices (42% vs 30%).

When asked what was the most satisfying aspect of practice, 80% said “patient relationships,” with 69% identifying “intellectual stimulation.”

On average, respondents see 19 patients per day, with specialists on the high side (19.8 per day) and primary care on the lower side (19.2 per day). Very few want to take on more, and most want to cut back.

Seven percent say they plan to change Medicare status to “non-participating,” and another 7% plan to opt out formally. 18% plan to renegotiate or terminate some insurance contracts, and 7% are contemplating a switch to a concierge or direct-pay practice model which would eliminate third-party payors altogether.

Over 62% estimate they currently provide $25,000 or more each year in uncompensated and/or charity care, but that’s likely to change in the near future, as 22% plan to reduce charity care.

Many physicians have already cut back. The authors note that doctors today are seeing 17% fewer patients per day than they did in 2008, a decline that could lead to tens of millions of fewer patients seen per year. That said, the report does not comment on how the decreased patient load has impacted the quality of the care that is delivered.

Nearly 70% of all respondents say they’ve implemented EMR systems, but they’re not entirely convinced of the virtues. While 33% say EMRs have improved quality of care, 14% believe they have diminished quality. Roughly half believe EMRs pose a significant privacy threat.

This is one aspect of practice in which there was a clear age differential: among doctors under 40, 83% had EMR systems, versus only 67% of those over 40.

The survey asked respondents to choose from a list of potential solutions to the tandem problems of soaring costs and diminished access.

Half (49.8%) view “less government regulation” as the key solution, with 34% advocating for wider adoption of “evidence based medicine.” Twenty-two percent favor “Widespread adoption of health savings accounts,” 22% favor “increasing the supply of physicians,” and 19% advocate a single-payor model.

Overall, though, the survey reflects a pervasive sense of uncertainty and a troubling powerlessness. Over 82% of physicians believe doctors have little ability to change the healthcare system, and 92% are unsure where the health system will be or how they will fit into it three to five years from now.