Outside the kitchen, cinnamon stacks up as a powerful anti-cancer ingredient in a recent European Journal of Medicinal Chemistry paper. 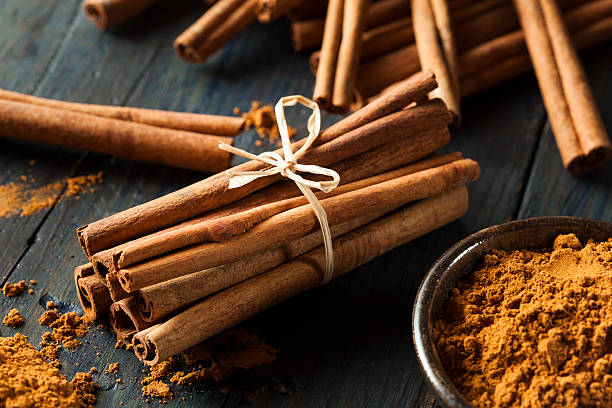 Impaired apoptosis is a hallmark of cancer: the cells do not die when they should, and they’re characterized by abnormal viability. Therefore, “One of the most important properties of any potential anticarcinogenic compound is its ability to interfere with cancer cell viability,” the Kashan University group writes.

Cinnamomum––what we commonly call cinnamon––is not a single plant, but rather a genus of small, aromatic evergreen trees and shrubs unique to different parts of the world. The ground spice we use in cooking and baking comes from dried strips of the inner bark of various Cinnamomum tree species. Two of the main culinary varieties are Ceylon cinnamon (Cinnamon zeylanicum), native to Sri Lanka, and cassia cinnamon (Cinnamomum aromaticum), which originated in Southern China. Extracts, teas, and essential oils derived from the tree’s bark and leaves have been used both in food and medicinally for centuries.

There is evidence that cinnamon extract (CE) has anti-proliferative effects against various types of cancer cells. The Kashan researchers cite a study that used a CE treatment on three hematological cancer cell lines (U937, Wurzburg and Jurkat cells). Each cell type exhibited a dose-dependent decrease in viability when treated with dosages ranging between 0.05 and 0.2 mg/ml of CE.

Another study found that cinnamon inhibited cell growth in the cervical cancer cell line, SiHa, when treated with various concentrations of CE (10, 20, 40 and 80 mg/ml).

The South Korean researchers also used cinnamon to treat rodents injected with mouse melanoma. They observed reductions in tumor size and a significantly increased survival rate among mice treated with CE, as compared with a control group that didn’t receive the cinnamon treatment.

“Further elucidation of [the] active components of cinnamon extract could lead to [the] development of potent anti-tumor agent[s] or complementary and alternative medicines for the treatment of diverse cancers,” the study’s authors argued in a 2010 BMC Cancer article.

The Kashan University group reports that cinnamon supports another essential part of the cancer treatment process: regulating the expression of growth factors. CE significantly inhibited the transcription and translation of various growth factors (VEGF-a, FGF, EFG and TGF-b) in a dose-dependent (0.5 and 0.3 mg/ml) manner in melanoma cell lines. These effects were not seen in healthy cells treated with comparable concentrations of CE.

Several individual phytonutrients present in cinnamon appear to be directly cytotoxic to certain types of cancer cells. One such compound is eugenol, which is also found in other healing herbs like basil, lemon balm, and nutmeg. In one study, eugenol decreased the proliferation rate of HeLa cancer cells by 50%. In another, the compound was shown to be cytotoxic against colon cancer cells HT-29 and HCT-15.

Earlier this year, the American Cancer Society shared some good news: cancer-related deaths in the US are declining. The overall cancer mortality rate dropped by 29% from 1991 to 2017 and fell by 2.2% between 2016 and 2017 alone, the largest single-year decline in cancer deaths ever recorded.

Yet cancer remains one of the world’s top causes of death, a position it is expected to hold for the foreseeable future. Worldwide, the number of new cancer cases is on the rise, and the World Health Organization projects that deaths due to cancer will reach over 13 million in 2030.

“Due to the increasing prevalence of malignancies worldwide and side effects of the current therapies, finding novel therapies is an urgent medical need,” wrote Sadeghi and colleagues in their European Journal of Medicinal Chemistry paper.

The preliminary in vitro work to date has been compelling, but it remains to be seen whether cinnamon’s anti-tumor effects will be borne out in clinical studies of humans with different types of cancer.

The need for alternative fungal infection treatments has arguably never been greater, as some types of Candida have become increasingly resistant to widely used antifungal medications like fluconazole.

Cinnamon may benefit diabetes patients, too. It’s been shown to significantly improve blood glucose control in individuals with type 2 diabetes. A randomized, double-blinded clinical study divided a cohort of 66 patients into three groups: placebo, low-dose and high-dose supplementation with cinnamon extract at 120 and 360 mg/d, respectively.

After three months of treatment, hemoglobin A(1c) and fasting blood glucose levels dropped significantly in patients in both the low- and high-dose treatment groups, but remained unchanged in patients in the placebo group (Lu, T. et al. Nutr Res. 2012; 32(6): 408-12).

“The distinct phytochemical profiles observed for the four types highlight the importance of considering cinnamon on a species-specific basis rather than as a generic whole,” they proposed.

Further research could help identify the most effective cinnamon varieties to use in treating different cancers and a host of other health conditions.