Every year, hundreds of billions of dollars are spent to discover new synthetic pharmaceutical agents and technologies intended to improve health; yet the burden of chronic disease continues unabated. Simply put, these interventions do not address the root causes of the most troublesome diseases. In fact, many pharmaceuticals place additional burden upon the very metabolic buffering systems they are intended to help.

Rather than working with the body to build up metabolic reserve, the most commonly used—and most well-reimbursed–therapies often stretch physiological resilience to a breaking point.

Consider, for example, the FDA’s recent requirement for additional label warnings on all statin drugs. The first is a warning that statin use can increase glycosylated hemoglobin (HbA1c), a marker of worsening blood glucose control. The second states that statin use increases memory loss and confusion, which abates once statins are discontinued.

Some doctors—and of course patients—have known about these “new” risks for years prior to FDA’s mandated label changes. Yet, in the weeks following FDA’s announcement, a number of prominent clinicians came out with statements dismissing the relevance of this warning, even criticizing FDA for potentially leading doctors to think twice before giving statins.

Statins are proven life-savers, these pundits reminded us. Who wouldn’t want to give them to everyone? After all, if you are concerned about diabetes risk, you can just add metformin to your statin prescription! So comfortable have some clinicians become with the “expected” side-effects of pharmaceuticals, that this type of thinking goes virtually unquestioned. But question it we must.

In the largest diabetes prevention trial to date, the Diabetes Prevention Program (DPP), metformin was compared to both placebo and lifestyle intervention for preventing the development of diabetes. The DPP study included over 3,200 patients from 27 different clinical centers throughout the US. All were considered “pre-diabetic” based on elevated fasting glucose and impaired glucose tolerance. Metformin was selected because in previous clinical trials this drug reduced the incidence of future diabetes in similar patients.

The lifestyle intervention patients participated in 16 group sessions intended to help them lose 7% of their body weight in the first six months, with the goal to maintain that for four years; the protocol recommended that patients get 150 minutes of moderate physical activity per week, mostly in the form of walking. Patients were also advised to reduce calories, especially from fat. All participants had a lifestyle coach.

It is interesting to note that the fat and calorie goals were used as a means to achieve the weight loss goal rather than as goals in and of themselves. In other words, if a patient ate in excess of the recommended calorie or fat intake, but was losing weight as planned, the coach did not push for calorie or fat reduction. Participants were encouraged to meet the fitness goals through better choices of meals and snack items, healthier food preparation, and careful selection of restaurants.”

All patients were followed for four years and tracked for changes in weight, fasting blood glucose, glycosylated hemoglobin, and other related health parameters. Within those 4 years, over 35% of patients given no intervention (placebo group) had developed type 2 diabetes; the average fasting blood glucose for this group rose gradually from a mean of 106 to almost 115 mg/dl—a continual stretching of the physiological resilience controlling blood sugar.

Metformin therapy lowered the cumulative incidence of type 2 diabetes by 31%, compared to the placebo group. What surprised many, however, was the fact that the lifestyle intervention therapy nearly doubled this benefit, reducing the cumulative incidence of diabetes in that group by a full 58% (Knowler WC, et al. N Engl J Med. 2002; 346(6):393-403).

There was another very important finding from the DPP, one that went largely overlooked. It is this: when the data were analyzed based on the age of the participants, researchers found that while the lifestyle intervention remained effective for all age groups, the metformin therapy became less effective with age. In patients over age 60, metformin was no better than placebo! 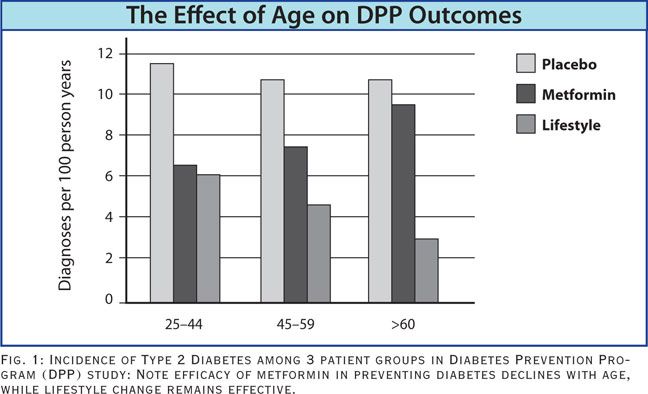 Think about it: the average age for initiation of statin therapy is roughly 50 years, and the majority of statin users are over 60. This means that the drug is least likely to be effective in the age bracket most likely to be taking it.

The notion thatmetformin can be used as a rescue medication for statin-induced diabetes appears to be a hopeless ploy for the vast majority of statin-users.

There are numerous genes, or gene variants, that are known to increase a person’s risk for diabetes. By using 34 of the most common gene variants affecting diabetes risk, the DPP researchers were able to categorize the study participants into 4 groups based on their Genetic Risk Score (GRS) for diabetes.

As one would expect, there was a statistical increase in diabetes incidence related to a higher GRS. However, in the group with the highest genetic risk (the 4th quartile of GRS), metformin therapy had virtually no risk-reducing impact at all. When the subjects with the highest GRS were given lifestyle intervention, the diabetes incidence rate was reduced just as much as in all the other genetic risk groups (Hivert MF, et al. Diabetes. 2011;60(4):1340-1348). 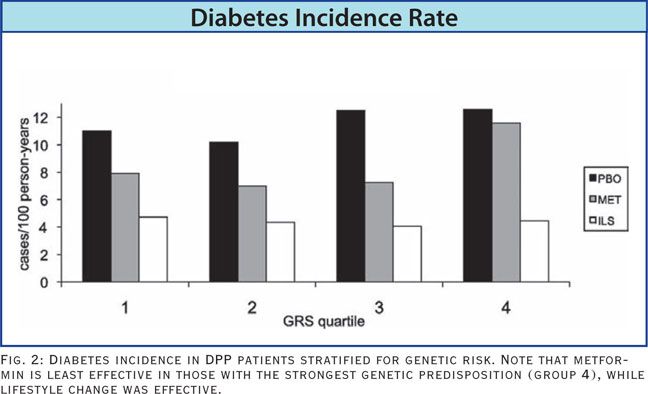 In a nutshell, the DPP data show clearly that modest lifestyle changes can attenuate the increased diabetes risk due to genetic predisposition, something metformin could not do. Lifestyle intervention builds up metabolic reserve and helps to prevent the metabolic drift toward diabetes. A drug intervention, though potentially effective in controlling advanced disease, is unable to do this in patients with high genetic risk, or in those over age 60 years.

Despite evidence like this, medications like metformin remain the mainstay of conventional care for patients on the fast track to diabetes.

The Framingham Risk Score (FRS) is one of the most relied-upon systems for gauging cardiovascular risk. What many clinicians do not realize is that this score is only statistically valid in patients under 75 years of age.

To see whether the FRS or any other risk-related biomarkers would accurately predict risk in older patients, researchers in Leiden, Netherlands, followed 302 people at age 85, with no previous history of heart disease for 5 years.

What they discovered was that, “In very old people from the general population with no history of cardiovascular disease, concentrations of homocysteine alone can accurately identify those at high risk of cardiovascular mortality, whereas classic risk factors included in the Framingham risk score do not.” They go on to state “These results suggest that in this age group, risk identification for primary prevention of cardiovascular disease should be based not on classic risk factors anymore, but on plasma concentrations of homocysteine (de Ruijter W, et al. BMJ. 2009;338:a3083)

Given that homocysteine levels can be attenuated via supplementation with B vitamins, one would think that the Leiden 85-Plus Study would have opened the door to a more careful consideration of supplementation as a therapeutic strategy.

That’s not what the authors concluded. Rather, the Leiden researchers made the following treatment recommendations: “Although homocysteine accurately predicts cardiovascular mortality in very old age, we do not suggest that lowering homocysteine will be beneficial; in fact, so far this approach has been shown to be ineffective. With regard to choosing effective methods for primary prevention of cardiovascular disease, the role of statins needs to be explored, since their beneficial effect in secondary prevention in old age is evident. Since the underlying atherosclerotic process is unlikely to change with age, statins could also be effective in primary prevention, if the selection of patients at high risk is accurate.”

Without a doubt, the intrinsic healing potential within the human body is the most powerful medical “tool” available to us. However, the so-called standards of care oblige most caregivers to look past what the body can do by itself and toward drugs and surgical procedures to “fix the cause of the disease.”

Soon, the new guidelines for treatment of dyslipidemia (ATPIV) will be upon us. The most likely new therapeutic target will be an LDL-C of 100mg/dl for the general patient population, and 70 mg/dl or less for high-risk patients. These numbers are based on large outcomes trials, the kind that only pharmaceutical companies can fund. Such guidelines will put even more pressure on physicians to prescribe statins to meet the stated goals.

Are those guidelines taking into account the fact that this increased use of statins will further increase the already staggering incidence of diabetes? Probably not!

In our over-reliance on pharmaceutical trump cards to nullify the consequences of years of unhealthy lifestyle and metabolic neglect, we ignore the most powerful healing tool we have. Our bodies are designed to take the appropriate messages from our lifestyles, our environments, and our diets and turn them into healthful physiological patterns. The most effective therapies should trigger these mechanisms rather than circumventing them.

Holistic and functional medicine clinicians need to have robust strategies for assessing risk, setting goals and building strong metabolic reserve in their at-risk patients, or they will be left managing patients with rescue interventions, hoping for the best.

Thomas G. Guilliams, PhD, has been providing evidence-based natural health solutions for clinicians and their patients for over 16 years. He is a clinical instructor at the University of Wisconsin (Madison)- School of Pharmacy, a faculty member of A4M’s Fellowship training program, and currently serves as the Vice-President of Science & Regulatory Affairs for Ortho Molecular Products, Dr. Guilliams’ newest book, The Original Prescription, describing the principles and mechanisms of lifestyle medicine, will be available Nov. 2012. You can find his other writings at www.pointinstitute.org..