When Questioning Clinical Dogma Is a Doctor’s Duty 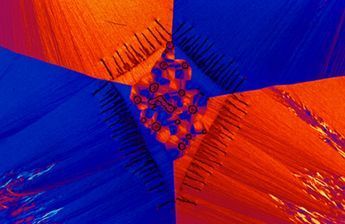 Crystallograph of Cholesterol: Though this lipid has been the main target of CVD treatment for the past 25 years, there is strong evidence that cholesterol may not be the villain it is made out to be, says integrative cardiologist Stephen Sinatra, MD. He believes chronicinflammation is the bigger culprit. Image courtesy Michael W. Davidson , Optical Microscopy Division, Florida State University Research Foundation

Twenty years ago, Dr. Stephen Sinatra was like most American cardiologists: firmly convinced that elevated cholesterol was the key driver of heart disease, and that thanks to statin drugs, he and his colleagues would soon be cutting the nation’s number one killer down to size.

“I was chief of cardiology at Manchester Memorial Hospital (CT). I was a paid consultant to some of the biggest statin manufacturers, and I was making $1,000 for every 30-minute statin lecture that I gave. At the time, based on the research, the cholesterol hypothesis made total sense.”

But by the mid-1990s, the self-professed “cholesterol choirboy” began to observe clinical phenomena that shook his faith:

Dr. Sinatra’s faith really began to falter when the Lyon Diet Heart study, published in 1994, showed that a Mediterranean-style diet could reduce CVD mortality by 76% in high-risk patients without significantly changing their total cholesterol or LDL levels.

Weighing the science for and against the cholesterol hypothesis, he faced what he described as a moral test: stick with the “faithful” despite his doubts, and continue to reap the financial rewards bestowed on the cholesterol clergy, or break away from the fold, and reckon with the science and clinical evidence that challenged the conventional wisdom.

He chose the latter path.

“When do you simply have to challenge the dogma?” That, Dr. Sinatra says, is a question doctors need to ask themselves more often.

“The courage of your convictions creates positive healing energy. When your practice is not in accord with your truth, you lower your vibration, and you become a lousy healer. If a doctor holds to his or her own truth and speaks it, his or her vibrations go up. If you treat out of fear, you’re not really a healer any more, you’re a robot,” he told Holistic Primary Care in an interview.

For Dr. Sinatra, the courage of his convictions that high cholesterol was not the main cause of heart disease, led to an entirely new direction for his practice. He shifted from aggressive lipid lowering to strategies aimed at reducing systemic inflammation—which he believes is the primary driver of heart disease.

He has come to believe that the lipid-based explanation for CVD is, by and large, a fallacy–albeit a profitable one. He expresses his view eloquently and in thorough detail in a recent book called, The Great Cholesterol Myth (Fair Winds Press 2012), co-authored with nutritionist Jonny Bowden.

Written for educated, health conscious consumers, the book is packed with references to hundreds of studies—most of them in mainstream journals—that give good reasons for questioning the lipid hypothesis and the statin-mania that it spawned.

“The established view in conventional medicine is that cholesterol is the main marker for CVD. Nothing could be further from the truth,” Dr. Sinatra told Holistic Primary Care.

He cited a number of major studies that challenge the hypothesis, including:

Who Benefits from Statins?

Dr. Sinatra emphasized that while he questions the cholesterol-based model of CVD, he’s not a zealot against using statins.

They have a role to play for sure, but they should be used judiciously. “Statins are great for middle-aged men with existing cardiovascular disease. Not for everyone else. People are not all alike,” he told Holistic Primary Care, adding that he generally avoids prescribing these drugs for women.

Dr. Sinatra counts himself among a growing number of cardiologists who believe that when statins do work, it is due to their ability to lower inflammation and reduce blood viscosity, not to their lipid modulating effects (read Blood Viscosity: The Unifying Parameter in CVD from our Spring 2012 edition).

“If a person on a statin goes to the emergency room with acute unstable angina, and you pull the statin, they will die a lot quicker, because the blood viscosity will increase quickly and this can be deadly.” He added that an under-appreciated finding from the widely publicized JUPITER trial several years back was the fact that in post-menopausal women, statins reduced the risk of venous thromboembolism. This is not due to a lipid-lowering effect.

High-risk men who smoke do well on statins but not for the reasons people think, said Dr. Sinatra.

This study also provides evidence that the key effect of statin therapy is in lowering blood viscosity. In their book, Statins: The HMG CoA Reductase Inhibitors in Perspective (Duntz, 2000), authors Gaw, Packard and Shepherd note that roughly 1,100 men in each arm of WOSCOPS maintained the same LDL level throughout the study period, regardless of whether or not they were on pravastatin. Yet those receiving the statin had 38% fewer events, suggesting that the benefits of statins are not related to their LDL lowering effect.

While men at high CVD risk appear to benefit from statins, with relatively lower risk of adverse events, women need to be much more cautious. Dr. Sinatra said that while the statin era did shed important light on the fact that CVD is a top killer of American women, the benefits of statins in preventing CVD in women have not been definitively proven. Yet the risks are significant.

Many in the conventional clinical community seem to have overlooked the CARE (Cholesterol and Recurrent Events) study, published in 1999, which looked at 500 post-menopausal women randomized to placebo or pravachol therapy. The women taking the statin did have fewer CV events, but there was no difference in overall mortality, because the pravachol group also showed a statistically significant increase in breast cancer (Sacks FM, et al. N Engl J Med. 1996; 335: 1001-1009.)

“There were 12 cases in the pravachol cohort but only one in the placebo group. Many doctors are not aware that statin therapy in women can markedly raise the risk of breast cancer.” The absolute number of cancers may not be large, but neither are the absolute numbers of fatal heart attacks prevented in the CARE study (119 vs 96).

The question of how to safely and effectively use statins is a relatively small one. The bigger question has to do with the process by which clinical hypotheses become healthcare policies, and data are dominated by dogma.

“The Achilles heel of any healer or any healing system is rigidity,” says Dr. Sinatra. “Any good healer can see the good in any modality. You need to be open to facts and use whatever works. Don’t get married to your modalities.”

“The courage of your convictions creates positive healing energy. When your practice is not in accord with your truth, you become a lousy healer.”