The concept of “leaky gut,” or intestinal hyperpermeability remains one of the more controversial digestive health issues of the last 20 years.

Many people are convinced they have it. Many mainstream gastroenterologists do not believe it is a real phenomenon. Many holistic and functional medicine practitioners are convinced the concept has merit. But hard, objective evidence has been elusive.

In a nutshell, “leaky gut” describes a breakdown in integrity of the intestinal endothelium that results from prolonged and chronic exposure to food borne toxins and inflammatory triggers. As the intestinal mucosa deteriorates under inflammatory assault, its barrier function is compromised. Toxins and allergenic macromolecules are then able to cross into the bloodstream, triggering more widespread systemic inflammation.

Once in circulation, these allergens and toxins provoke a cascade of problems in multiple organ systems. Everything from autoimmune joint inflammation to cognitive dysfunction has been linked to leaky gut.

A few decades back, this concept was routinely dismissed by mainstream physicians. But a growing body of epidemiological, immunological, and microbiome data has accumulated over the years to support the notion of intestinal hyperpermeability.

Devil in the Details

Recently, the emergence of high-resolution confocal laser endomicroscopy (CLE) has lent support to the reality of leaky gut by enabling direct visualization of cellular and subcellular changes in living patients. Endomicroscopy gives the ability to detect subtle inflammatory changes and epithelial gap formations in patients with intolerance to specific food groups.

Endoscopy used to be a fairly simplistic technique, one that was excellent for identifying large endothelial features—polyps, lesions, and tumors—but of little value in detecting subtle but clinically important tissue changes.

“Advances in endoscopic imaging have rapidly progressed from wide field, low-magnification images, to increasingly high magnification (40X–200X), allowing improved visualization of the macro-architecture of polypoid and flat lesions. Recently, confocal laser endomicroscopes have been developed that allow magnifications of 1,000X with1-micron resolution, enabling visualization of cellular and subcellular structures in vivo in real time,” note the authors of a report entitled Imaging the Leaky Gut, in the journal Gastroenterology.

“Through the use of vascular and molecular contrast agents, multiple structural and functional events can be directly observed, including angiogenesis and monoclonal antibody antigen binding to epithelial targets,” they explain. These techniques open entirely new ways of imaging the GI tract and, hopefully, of shedding light on questions like: Why do some people experience persistent GI distress when all available clinical tests come back normal.

In a compelling multicenter study, 36 patients with irritable bowel syndrome (IBS) and suspected food intolerance were exposed to known food antigens during endomicroscopy. In 22, the endoscopists could observe typical changes indicating remodeling of the mucosal architecture within 5 minutes of exposure (Fritscher-Ravens A, et al. Gastroenterology. 2014; 147 (5): 1012-20).

Using CLE, they could detect epithelial leaks and gaps, and the widening of intervillous spaces. These changes were not observed in a small cohort of non-allergic control subjects with Barrett’s esophagus.

Conditions like IBS truly present a situation where “the devil is in the details,” as the saying goes. The profound changes in the intestinal mucosa following exposure to allergenic triggers are not necessarily visible with standard endoscopic tools.

The authors point out that among CLE-positive patients, symptom scores improved by more than 50% following four weeks on diets that excluded the foods to which they were sensitive. This positive response increased to 74% after 12 months on the diets.

In a systematic review looking at the clinical potential of CLE, Alessandro Fugazza and colleagues write that, “the overall sensitivity, specificity, accuracy, and predictive values of CLE are favorable and were often found to be superior in comparison with standard endoscopy plus histopathology.” (Fugazza A, et al. Biomed Res Int. 2016)

As with so much advanced healthcare technology, the still unanswered question for CLE is whether it will prove cost-effective.

By providing clear evidence of microinflammation and epithelial gaps at the cellular level, CLE definitely provides a new tool for exploring food intolerance and allergy.

Many factors affect the development of intestinal permeability. At the same time, it can manifest symptomatically in many different ways. This is, in part, why it has been so difficult to pin down both clinically and in research settings.

One of the most interesting and fast-moving areas of research is focused on the relationship between the digestive system, the microbiome, and the nervous system.

This line of research is taking some fascinating turns, as scientists begin to characterize the enteric nervous system. This bidirectional Gut-Brain Axis governs many of the functions in the gastrointestinal system and also impacts neurocognitive function.

Digestive function is a parasympathetic activity. This is why the downstream neuroendocrine effects of stress–whether actual or perceived–profoundly affect digestive enzyme production, GI motility, and blood flow. To add complexity to an already complicated picture, there’s new evidence that stress impacts the microbiome. And vice versa.

The organisms in our GI tract play a role in regulating brain and behavior, as shown by the following studies:

A 2017 review suggests that the gut microbiome is profoundly affected by dietary factors. A Western diet high in processed 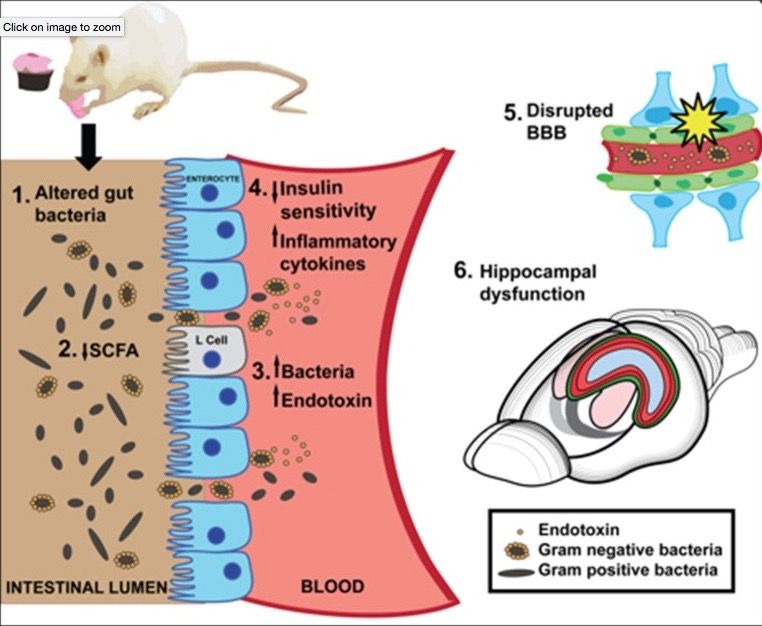 The authors note that, “Western diet consumption also increases production of endotoxin by commensal bacteria, which may promote neuroinflammation and cognitive dysfunction.”

We now know that the immune system is highly integrated into the intestinal lining, responding to antigenic stimulation, toxin-generated free radicals, and bacteria-generated lipopolysaccharides.

Constant immune system activation fuels localized inflammation that ultimately compromises barrier integrity. This allows entry of noxious substances into the systemic circulation promoting systemic inflammation and immune activation. The strongest example of this is in the context of non-celiac gluten sensitivity.

OK, so the evidence is building that leaky gut is a real phenomenon that negatively affects many aspects of health. What can we, as clinicians, do for people suffering with it?

The first step is to recognize that the GI tract is not just a simple tube of coiled muscle. Rather, it is an extremely complex, multilayered, highly nuanced system intricately linked to, and in constant communication with, the neuroendocrine system. The gut impacts all our organs and systems.

This complexity requires an equally subtle clinical approach, like a Tai Chi master who moves with clarity of intent combined with a gentle encouragement.

My approach, based on many years of TCM practice, is to support, nourish, harmonize and encourage, rather than to replace or override.

For example, I use a combination of botanicals and mushrooms as primary healing tools. They have an ancient history of use in multiple traditional healing systems and are themselves complex living systems. They’re multidimensional in their modes of action, and provide a myriad of nutrients and therapeutic constituents — vitamins, minerals, fatty acids, amino acids, fibers/prebiotics, polyphenols, and polysaccharides–that act on multiple systems.

I use organically grown mycelia which have a very low allergenic potential compared to the fruiting body.

In choosing botanicals, I draw from the rich diversity of digestion-targeted botanicals used in Asian medicine that have now been validated with current research. These include deglycyrrizinated licorice root, tangerine fruit, ginger, cinnamon, sacred lotus seed, pomegranate seed, pepper fruit, and Chinese cardamom.

I also rely on alginates and pectin for their combination of prebiotic, anti-inflammatory, and detoxification capabilities. These can be used in foods, through the addition of herbs, seaweeds and medicinal mushrooms in cooking, as well as in more concentrated forms as supplements, such as modified citrus pectin, alginates, and botanical-mushroom combination formulas.

I often supply a small amount of digestive enzyme support to strengthen organ capability, but urge patients to avoid heavy use of enzyme supplements that take the place of the enzymes generated by their own bodies. The latter is, I think, a short-sighted strategy.

L-Glutamine and probiotics are also foundational to a comprehensive targeted supplement regimen.

Clearly, there are a wide variety of foods and beverages that can exacerbate leaky gut: alcohol, caffeine, and highly allergenic foods like gluten, soy, egg, and dairy are top of the list. Patients will usually need to exclude or limit some or all of these.

Food allergy testing or elimination diets can help to clarify the appropriate diet for each individual. There’s no one-size-fits-all approach.

What we do know is that diets high in saturated fats and carbohydrates, processed foods, and sugars, contributes to leaking gut pathology (Bischoff SC, et al. BMC Gastroenterology. 2014). So I encourage all patients to follow a nutrient-dense, low-glycemic, anti-inflammatory diet of lean proteins, pectin, and fiber-rich fruits, vegetables, whole grains, foods rich in omega-3 fatty acids (flax seeds, walnuts, avocados, and salmon), and probiotic foods such as yogurt, kim chee, and kefir.

Look at the Big Picture

The digestive system holds a record of each person’s life—past traumas, genetic predispositions, coping styles, personality characteristics, memories, emotions— all are imprinted there. An individual’s life story is as important as the in-depth medical history in determining the right approach, so it is very important to listen carefully.

In addition to healing with foods, teas, and targeted botanicals, I recommend meditation, Chi Gong, Tai Chi, and walking in nature. These practices are nourishing, helping each person to slow down, take a step back, and integrate (digest and assimilate) the various aspects of their lives. They also facilitate the process of letting go — or elimination.

Through them we can encourage nourishment, digestion, assimilation, and elimination on the larger scale of the individual’s entire life. As this healing takes place, it is reflected in the regeneration of the digestive system.

The devil may be in the cellular details, but the healing is found in the big picture!

Isaac Eliaz, MD, is an integrative medical doctor, licensed acupuncturist, researcher, product formulator and frequent lecturer. He has been a pioneer in holistic medicine since the early 1980s, and has published numerous peer-reviewed research papers. He is founder and medical director of the Amitabha Medical Clinic in Santa Rosa, CA, an integrative center specializing in cancer, Lyme disease, and other chronic conditions. He is also the founder and chief formulator of Clinical Synergy, a company providing targeted, research based, physician-formulated nutraceuticals.