Probiotics are widely touted for their capacity to improve digestive function and strengthen gastrointestinal health. But according to new research, the effects of beneficial bacteria extend far beyond the gut alone.

In recent years, heightened interest in the human microbiome has deepened scientists’ understanding of the manifold benefits that “good” bacteria can offer. We now know that certain probiotic strains produce nutrients that influence our health system-wide.

The gut microbiota, for example, acts as an important source of enzymes and vitamins that humans can’t synthesize on our own, including vitamin K, and most of the water-soluble B-group vitamins. Since our bodies inherently lack these essential nutrients, it’s crucial that we obtain them either through the foods we eat or from the thankless efforts of our intestinal flora (Rossi, M. et al. Nutrients. 2011; 3(1): 118-134).

Researchers recently discovered that Lactobacillus fermentum ME-3, another unique strain, produces a compound that possesses a striking array of powerful antioxidant, antimicrobial, anti-inflammatory, and detoxifying properties.

L. fermentum ME-3 was first isolated by a team of scientists led by microbiologist Marika Mikelsaar, MD, PhD at the University of Tartu, Estonia. In their studies of Estonian children — who are known for their highly tolerant immune systems — Mikelsaar and her colleagues explored the possibility that probiotics might play a role in the kids’ exceptional immune health. Indeed, they found a distinctive microbial fingerprint among children with the most balanced immune systems. Specifically, they identified the L. fermentum ME-3 strain in one of their healthy young subjects.

Since then, continued studies on ME-3 conducted by Mikelsaar and others have shown this organism to confer a number of benefits.

For one, L. fermentum ME-3 acts as an antimicrobial agent. Mikelsaar and co-author Mihkel Zilmer, MD, PhD — another key contributor to the research on ME-3 — write that when incorporated into various dairy products like yogurt, cheese, and milk, L. fermentum ME-3  successfully suppresses pathogenic food contaminants including Salmonella, Shigella, and Staphylococcus. It can also reduce urinary tract infections caused by E. coli.

They add that ME-3 can also increase the antioxidative activity of blood serum, improve LDL and post-prandial lipid composition, and defend against oxidative stress (Mikelsaar, M. & Zilmer, M. Micro Ecol in Health & Disease. 2009; 21(1): 1-27).

ME-3’s probiotic power derives largely from its ability to produce glutathione, a critical disease-fighting compound. Often referred to as the “master antioxidant,” glutathione is the most highly concentrated antioxidant in the body. It exists inside every single human cell and serves a wide range of important bodily functions.

An intracellular tripeptide, glutathione is made from the amino acids glutamine, glycine, and cysteine. Most often noted for its antioxidant properties, it neutralizes free radicals, which are known to wreak havoc throughout many of the body’s systems.

L. fermentum ME-3 supports healthy glutathione levels in three key ways: synthesis, uptake, and regeneration. First, the bacterial strain is able to directly synthesize glutathione on its own. When the antioxidant isn’t present, ME-3 can also extract available glutathione molecules from the surrounding environment. Additionally, ME-3 recycles oxidized or “spent” glutathione back into its active state. Because it works along all three of these pathways, scientists consider ME-3 to be a “complete glutathione system.”

Although glutathione is present in all human cells, the liver is the primary producer and exporter. Not surprisingly, the antioxidant also plays a critical role in the detoxification process. It protects hepatic cells from heavy metals including mercury, lead, cadmium, and other environmental toxins, and also reduces tissue susceptibility to toxicity from drugs like alcohol and acetaminophen.

Antioxidant-boosting probiotics may benefit those with low glutathione levels. Some have suggested that because it’s a peptide, oral glutathione supplements may be degraded by peptidase enzymes during digestion.

Probiotics like L. fermentum ME-3 offer a potential workaround, instead 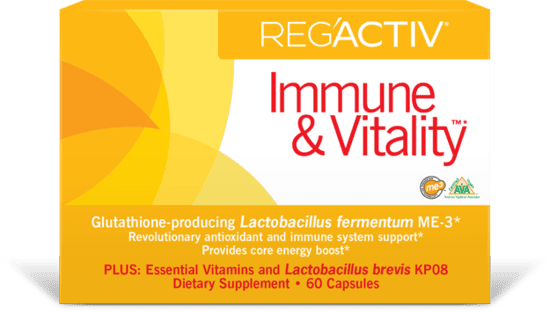 prompting the body to produce essential nutrients from within.

Last year, Essential Formulas Incorporated (EFI) debuted a line of probiotic ME-3 products in the US. The “formulations containing ME-3 are a truly groundbreaking scientific advancement,” states EFI’s Director of Science, Ross Pelton, RPh, CCN. “The discovery and application of this probiotic is astonishing in its ability to produce the most effective antioxidant in the human body.”

MnSOD can withstand stomach and bile acids, survives without refrigeration, and doesn’t need to be enterically coated.

L. fermentum ME-3 is by no means the only probiotic strain that generates beneficial substances for its human hosts. Numerous other strains also do so.  Researchers demonstrated that Enterococcus faecalis TH10, a lactic acid bacterial strain isolated from tempeh — a traditional Malaysian fermented soy food — produces 3-phenyllactic acid, a compound with antibacterial activity against various pathogens like Staphylococcus aureus and E. coli (Ohhira, I. et al. Biocontrol Science. 2004; 9(3): 77-81).

The above are just a few examples of the extraordinary range of healing benefits that probiotics offer. As the field of microbiome research continues to expand, so wil our understanding of the vast role of beneficial bacteria in supporting good gut, immune, and overall health.