Georgene had certainly seen better days. At the age of 84, the Pacific Beach, CA, resident was taking Ativan to manage her anxiety. Though the medication provided some relief, it also affected her balance, making it difficult to stand and walk. So she used a walker. But this limited her mobility and dampened her mood.

Having developed a tolerance over time, Georgene required increasingly stronger doses of Ativan, which caused sleepiness and worsened her balance.

Then Georgene, with whom I worked as a LivHOME care manager, discovered T’ai Chi. This low-impact form of exercise has long been practiced within traditional martial arts and is known to increase strength, flexibility, body awareness, and concentration. Georgene enrolled in 90-minute T’ai Chi classes offered through the local public school’s adult education program.

Designed specifically for seniors, the classes used a seated rather than a standing position where necessary, encouraged seniors who could stand to remain on two feet if they preferred instead of balancing on one, and focused strongly on hand motions and breathing exercises, both of which can easily be done in a chair. 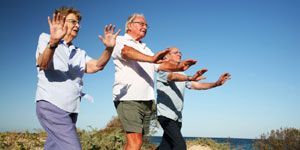 At first, Georgene opted for the chair. Participating 3 times weekly, however, she was soon able to progress to a standing position. By the end of her first full year practicing T’ai Chi, she could stand on her own and had stopped using her walker. I was delighted to watch her self-esteem and optimism blossom. Most strikingly, Georgene found that she no longer needed Ativan, and stopped taking it.

As a professional care manager with a focus on quality-of-life for seniors, I’ve seen T’ai Chi help dozens of clients. Its capacity to improve movement, strength, balance and mobility are well-known. A study by Stanford University researchers in 2006 showing an improvement in both lower- and upper-body strength in a group of women and men of an average age of 66 who had participated in 36 T’ai Chi classes over a period of 12 weeks (Taylor-Piliae RE, et al. Altern Ther Health Med. 2006; 12(2): 50-8). The same study showed a significant boost in upper- and lower-body flexibility among women.

T’ai Chi is recommended by The American and British Geriatrics Societies to help reduce and prevent falls among seniors.

In cases like Georgene’s I’ve also observed broader benefits from T’ai Chi practice. Arthritis, low bone density, sleep problems, hypertension and depression are just a few of the conditions T’ai Chi can improve, as shown by a number of major studies cited in a Harvard Health Letter article titled, The Health Benefits of Tai Chi (May 2009):

Hypertension: In a review of 26 studies published in Preventive Cardiology (Spring 2008), Dr. Gloria Yeh of Harvard Medical School reported that in 85% of trials, T’ai Chi 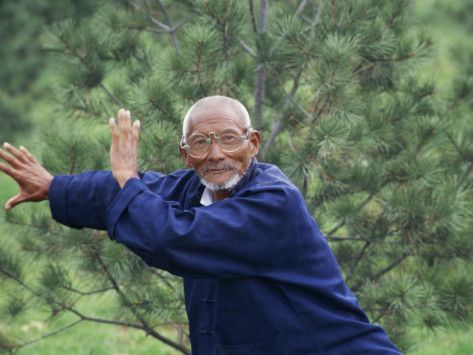 A recent systematic review by Portuguese investigators cited T’ai Chi among the most effective forms of exercise for reducing disease symptoms and improving mobility, gait, balance and quality of life in people with Parkinson’s (Grazina R, Massano J. Rev Neurosci. 2013; 24(2): 139-52).

Arthritis: Numerous studies, including one funded by The Arthritis Foundation, have shown T’ai Chi to improve the pain, fatigue and stiffness brought on by all types of arthritis. The Arthritis Foundation study was presented at the 2011 annual scientific meeting of the American College of Rheumatology. In addition to physical benefits, there’s a growing body of evidence supporting Tai Chi’s positive effect on mood and emotional well-being.

Depression: A UCLA study published in The American Journal of Geriatric Psychiatry found that adults suffering from depression who combined a weekly T’ai Chi exercise class with standard depression treatment experienced a greater improvement in the level of depression — along with improved quality of life, better memory and cognition–than a control group that did not take T’ai Chi (Lavretsky H, et al. Am J Geriatr Psychiatry. 2011; 19(10): 839-50).

Mental and Emotional Well-Being: In another 2006 Stanford Study, 39 subjects were given 12 weeks of T’ai Chi instruction and their mental health was assessed before and afterward. The participants were evaluated for overall mood, stress levels, perceived social supports and self-confidence measures. They showed significant improvement in all four of these categories, with perceived stress levels showing the largest improvement. The 2011 Arthritis Foundation Study cited above also found an increased sense of well-being among T’ai Chi participants.

It makes sense, then, that in practicing T’ai Chi regularly over time, Georgene experienced a decrease in anxiety not to mention an overall boost to her mood and quality of life.

Of course there are skeptics — those who argue that if not practiced properly, T’ai Chi can cause knee strains and other joint-related injuries or that certain shortened forms of T’ai Chi can actually prove counterproductive. By and large, though, the evidence and personal experience are stacked clearly in favor of T’ai Chi’s benefits far beyond mobility, balance and strength.

Low-cost T’ai Chi classes are readily available throughout the country, including in community centers and churches and at local branches of The Area Agency on Aging. Physicians should feel confident in encouraging seniors to explore this ancient practice, and to incorporate it into their wellness programs.

Kathy Capobianco is a Care Manager at LivHOME, one of the nation’s largest providers of professionally led, at-home care for seniors. Trained as a geriatric nurse, she has more than twenty years of experience and specializes in providing care that focuses on overall well-being and quality of life.