A group of investigators at the University of California, Davis MIND Institute made the surprising discovery that brain samples from late-onset Alzheimer’s patients contained increased levels of Gram-negative bacterial molecules. While previous research has linked certain infections to a heightened risk of dementia, the UC Davis team’s findings are the first to conclusively show elevated amounts of Gram-negative bacterial antigens in the brains of patients with Alzheimer’s disease.

A host of Gram-negative bacteria, including 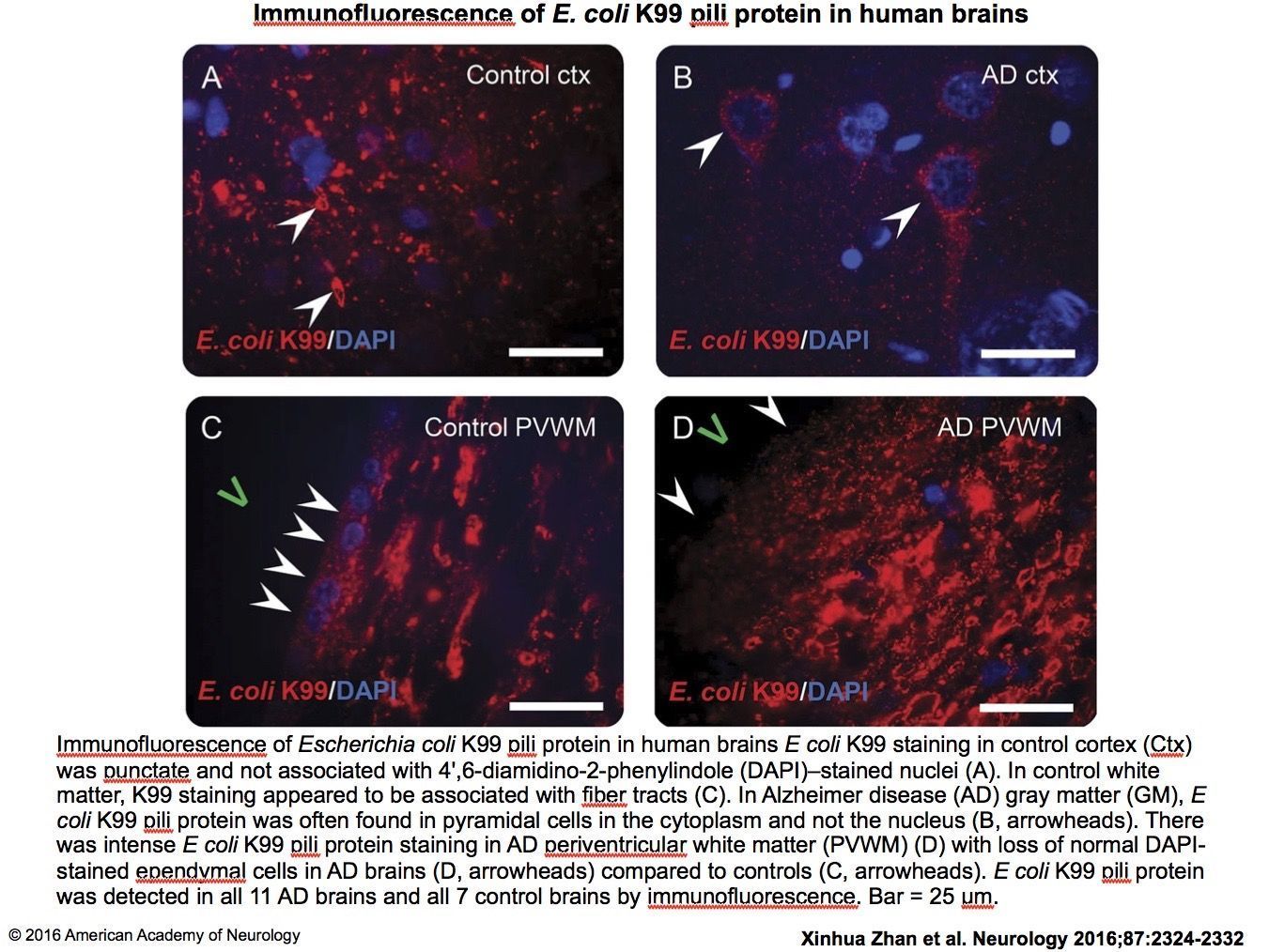 Escherichia coli, Helicobacter pylori, Chlamydophila pneumoniae, Salmonella and Shigella, are pathogenic and can trigger disorders in various parts of the body. The UC Davis study, published late last year in the journal Neurology, adds to the growing evidence that these disease-causing bacteria might play a role in Alzheimer’s pathology.

The LPS molecules — characteristic components of Gram-negative bacteria found in the outer cell membranes — was identified in all of the Alzheimer’s brain samples tested, but not in the controls. It’s noteworthy that LPS co-localized with the neurotoxic peptide amyloid β in amyloid plaques and in the blood vessels of Alzheimer’s brains. A neuropathological hallmark of Alzheimer’s, amyloid plaque is a distinctive indicator of the disease’s progression.

E. coli-related DNA sequences were detected in a majority of brain samples from Alzheimer’s and control individuals, underscoring the fact that E. coli exposure is quite common, though not always pathogenic. But other research from Dr. Zhan’s lab shows clearly that the presence of E. coli in the brain can very definitely cause problems.

This current Neurology paper followed prior work demonstrating that E. coli-derived LPS promoted the formation of amyloid-like plaques in rodent models. In a 2015 report, they showed that bacterial LPS plus ischemia/hypoxia can increase amyloid β production resulting in amyloid plaque-like aggregates in rat brains.

To date, conventional Alzheimer’s treatment approaches have been focuses on amyloid reduction. By and large, this strategy has given very modest results.

The new lines of research suggesting that infectious agents may be Alzheimer’s triggers could broaden dementia interventions to include targeting bacterial components as well.

One area receiving increased attention is the influence of systemic inflammation  in the pathogenesis of Alzheimer’s disease. An overgrowth of Gram-negative bacteria anywhere in the body can cause systemic inflammation. The implication here is that treating infections caused by pathogens linked to Alzheimer’s could pose a novel strategy for modifying dementia risk (Pussinen, P. et al. Arterio Throm & Vasc Biol. 2007; 27(6): 1433-1439, Kamer, A. et al. Alz & Dem. 2008; 4(4): 242–250).

Though age is considered to be the primary risk factor for late-onset, sporadic Alzheimer’s disease, Dr. Zhan points out in the introduction to this latest paper that serious infections by a number of different pathogens can double the five-year odds of developing Alzheimer’s. Statistically, vaccines against diphtheria, tetanus, polio and influenza are associated with lower risk of Alzheimer’s (Verreault R, et al. CMAJ. 2001: 165:11).

In addition to the data published by the UC Davis team, other researchers have drawn associations between Alzheimer’s disease and bacterial infections. H. pylori — the once controversial but today widely recognized cause of peptic ulcers — is also regarded as a possible culprit in the etiology of dementia.

The presence of anti-HSV IgG antibodies in plasma increases the odds ratio for an Alzheimer’s diagnosis by 2.25, and it was predictive of onset of the disease 6.5 years before the diagnosis is made. The HSV-associated risk for developing Alzheimer’s appeared to be especially increased both among women and those over 60 years of age at time of plasma sampling. These findings, the authors conclude, confirm previous indicators that HSV infection could play a role in the early development of Alzheimer’s (Lövheim, H. et al. Alz & Dem. 2015; 11(6): 587–592).

In a 2011 article published in Holistic Primary Care, neurologist David Perlmutter, author of The Better Brain Book and other popular brain health titles, proposed the idea that beta-amyloid formation in the brain may actually be a protective mechanism triggered by the presence of bacterial or viral pathogens. Though amyloid plaque buildup is clearly connected with neurodegeneration and loss of cogntive function, in essence it may not be truly causal.

If that is true, then therapies aimed at eliminating or blocking amyloid production may turn out to be a fool’s errand.

Zhan and colleagues note that they did not screen for the presence of live bacteria in brain tissue, but that others have published data suggesting that live bacteria can, in fact, be found in human brain tissue in some cases. “Studies of brain biopsies obtained during life would help address the possibility of contamination during autopsy.”

As scientists develop a greater understanding of the pathways and impacts of infectious agents on Alzheimer’s disease etiology, future discoveries could open doors to new Alzheimer’s treatment and prevention options.