Non-nutritive sweeteners, including those used in diet sodas, have long been touted as a better alternative to sugar and sugar-sweetened beverages for people trying to control their weight.

Not so, according to recent research by Sharon Fowler and colleagues at the University of Texas Health Science Center. Her study of nearly 750 people indicates that contrary to public expectations, consumption of diet sodas might actually be causing weight gain. At the very least, these no-calorie alternatives are not helping people lose weight.

Fowler’s study is especially noteworthy because all subjects in her cohort were over 65 years of age. Seniors typically experience significant age-related shifts in body composition, and consequently they have the highest risk of cardiometabolic disease.

On top of this, adults over 50 in the US drink more diet soda than regular soda – the only demographic that does so. One third of adults over 65 years report drinking diet soda, according to a 2013 Gallup survey. 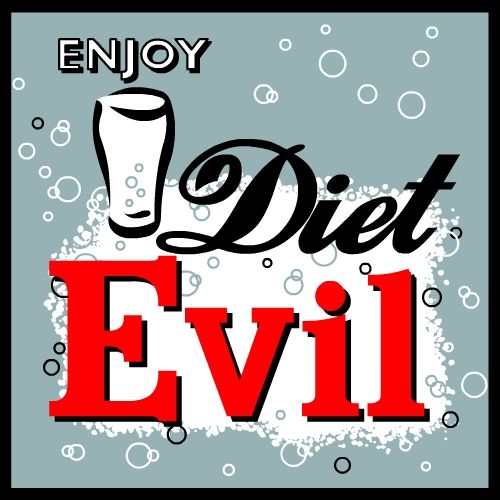 Dr. Fowler’s study, titled The San Antonio Longitudinal Study of Aging (SALSA), tracked 749 individuals (Mexican-American and European-American) over 65 years old, across a ten-year period. The participants were categorized according to average diet soda intake at baseline, and at follow-ups: non-users (<0.05 per day), occasional users (>0 but <1 per day), and daily users (≥1 per day).

The investigators measured waist circumference, height and weight (for BMI) at baseline, and at each follow up. Full follow up data was available for 466 participants.

The results were remarkable.

Between follow-up visits, diet soda drinkers gained significantly more girth than non-users (2.11cm vs. 0.77cm increase in waist circumference). This effect was significant, even after controlling for all other factors that might explain the increase (age, diabetes mellitus status, leisure time physical activity, smoking status, demographic factors, follow up length).

When they broke the data down further, the UT researchers found a positive dose-response relationship between diet soda intake and waist circumference, with daily drinkers having almost four times the increase in waist size than non-drinkers.

Over the course of the trial, this amounted to less than an inch for non-users, 1.8 inches for occasional users, and 3.2 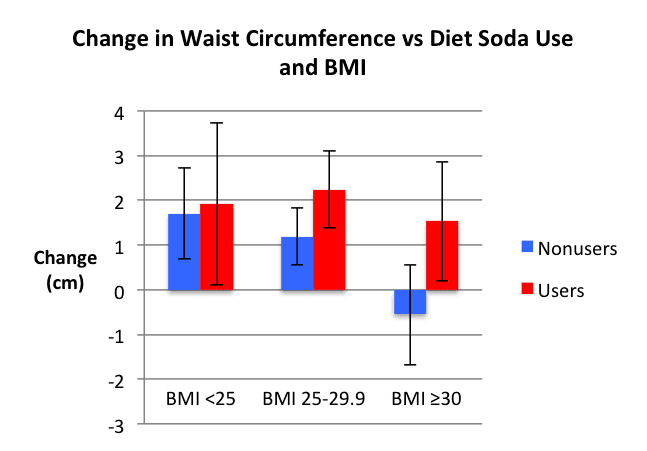 There was no such pattern of pronounced weight gain associated with regular (sugar-sweetened) soda intake, although frequent soda drinkers’ waistlines also grew somewhat during the trial.

Interestingly, diet soda drinkers in this study had higher education levels and socioeconomic status, were more likely to be European American, less likely to smoke, and tended to do more exercise than non-users. In spite of these apparent health advantages, diet soda drinkers also had significantly higher BMI and larger waistlines than those who didn’t drink diet soda.

Over time, trends in BMI and waist circumference showed a diverging pattern: BMI peaked by 75 years of age, and then declined rapidly in both men and women. Meanwhile, waist circumference continued to increase steadily before reaching a plateau around 80 years old in men; this same pattern was seen in women, but was even more striking. Women’s waistlines started out smaller, but caught up to their male counterparts by 80 years old, indicating greater gains in abdominal fat.

The “diet soda effect” appears to be influenced somewhat by initial baseline BMI.

In those with a healthy BMI (<25), diet soda consumption had little effect on waistline circumference. In people who were already obese (BMI >30), there was a significant gain associated with diet soda consumption. Fowler’s group observed an intermediate effect in those categorized as overweight, BMI 25-30).

Abdominal Fat in a Bottle

An expanding waistline indicates excess abdominal fat, which is a predictor of cardiometabolic disease. A larger waist circumference (particularly >35” for women, >40” for men) is associated with greater risk of type 2 diabetes, hypertension, cardiovascular disease, and cognitive impairment. These chronic diseases are among the leading causes of death in the US, particularly in this age group, and impose a significant healthcare burden. 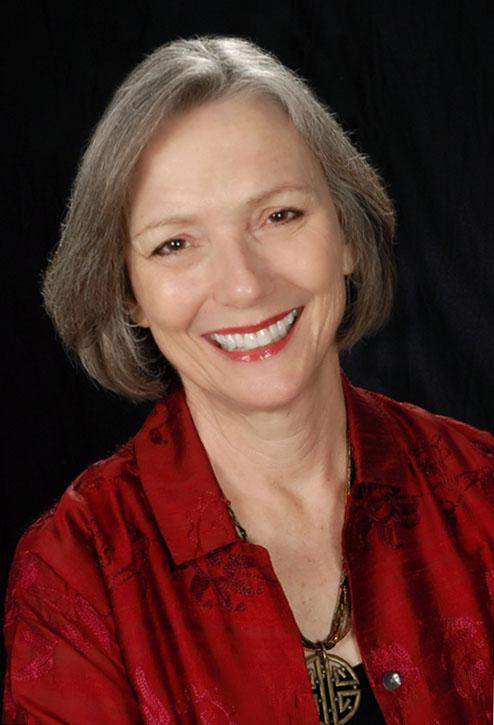 Given these sobering facts, the SALSA study should prompt doctors to seriously reconsider recommending that older, overweight patients switch to diet soda to trim their waistlines and reduce disease risk.

This study shows clearly that the diet soda drinkers gained excess inches of abdominal fat, even as their BMI declined in later years. The more diet soda they drank, the more they gained.

It is worth remembering that this was a small study, and that it did not capture information about overall calorie consumption.

However, none of the trials in that metanalysis included older adults, and most of those studies only tracked subjects for periods of weeks rather than years, as was the case in SALSA.

Fowler’s findings are in line with larger cohort studies. A link between diet soda consumption and increased cardiovascular disease has been found in older women, (Vyas et al. J Am Coll Cardiol. 2014) and Dr. Fowler notes that negative cardiometabolic effects tend to be less pronounced in females than males.

No Fooling the Microbiome

Dr. Fowler states that the negative cardiometabolic effects associated with diet drinks appear to be similar, irrespective of which artificial sweetener is used. The most common ones are aspartame, acesulfame potassium, or sucralose.

Asked to comment on the possible mechanisms at play, she speculates that artificial sweeteners could be disrupting the balance of the gut microbiota – a position that holds some weight. A landmark study recently showed that artificial sweeteners caused glucose intolerance in both mice and men, and that they did so by altering the gut bacteria (Suez et al. Nature. 2014).

As for expanding waistlines, probiotics have been shown to reduce abdominal fat in overweight individuals in a clinical setting, further supporting the idea that our gut microbiota might be the key to understanding the negative health effects of diet drinks (Kadooka et al. Nature. 2010).

We may be able to fool our human sweet tooth with non-nutritive artificial sweeteners, but it seems we can’t fool our microbiome.

Whatever the mechanism, it is increasingly evident that artificial sweeteners can no longer be considered metabolically inactive, a view recently articulated in a paper by Pepino (Pepino MY. Physiol Behav. 2015).

Rather than steering older, overweight patients towards diet drinks, healthcare practitioners should consider pointing them towards naturally calorie-free beverages, like still or sparkling water, or unsweetened tea.

Better yet, for those patients reluctant to give up the sweet fizz of soda, a host of probiotic beverages are emerging on supermarket shelves, including kombucha and water kefir. These soda substitutes are naturally low in sugar, come in a wide selection of flavors, and are bursting with probiotics that we may find are the key to whittling that waistline.

Amy Burkholder recently completed her Master of Science in Nutrition and Integrative Health from Maryland University of Integrative Health (MUIH). She is currently enrolled in the internship program at MUIH, providing community nutrition education, culinary demonstrations, and writing articles and recipes for health and wellness publications. Amy has a research background, with interests in prenatal and early years nutrition, food allergies, and the role of gut microbes in our health.