Maybe ol’ Donovan, that quintessential 1960s troubadour, knew a thing or two about neuroendocrinology when he sang the praises of “Mellow Yellow.”

It turns out that a mere whiff of Saffron (Crocus sativus) can produce measurable and potentially meaningful changes in young womens’ hormonal chemistry.

Dr. Hajime Fukui and colleagues at the Nara University of Education, Nara, Japan, assessed the effects of volatilized Saffron aromatherapy in a cohort of 47 college-aged women. The researchers measured cortisol, testosterone, and 17-β-estradiol levels in saliva, with an eye toward the possibility that Saffron might have potential as a remedy for dysmenorrhea, PMS, and other hormone-mediated conditions.

They randomly assigned the women to undergo a single 20 minute aromatherapy session with either an ethanol & water placebo (N=11) or a Saffron extract (N=36) diluted in ethanol to the point where the distinct scent of saffron was no longer readily detectable. Saliva samples collected after 20 minutes showed clear hormonal differences between the two groups.

The girls inhaling the saffron extract showed statistically significant reductions in cortisol and increases in estradiol; inhalation of the alcohol placebo had just the opposite effect, increasing estradiol and reducing cortisol.

Saffron’s effects on estradial were similar for women in the follicular versus luteal phases of their menstrual cycles. The effect on testosterone did show something of a phase difference; saffron exposure reduced testosterone slightly during the follicular, and raised it during the luteal phase though the difference was not statistically significant.

The investigators also used the State-Trait Anxiety Inventory (STAI) to assess the participants’ subjective experiences and found that exposure to the vaporized Saffron reduced perceived anxiety, while exposure to the alcohol alone had no such effect. The findings were reported in the journal, Phytomedicine.

“The present findings support the existence of physiological and psychological effects of saffron odor in women.This is the first report to suggest that saffron odor may be effective in treating menstrual distress,” the authors note.

Commenting on Dr. Fukui’s study, Jacob Schor, ND, wrote in Natural Medicine Journal that this is not 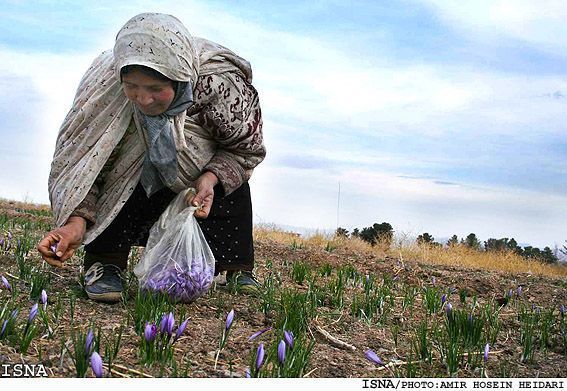 the first trial to suggest that Saffron has potential to help women manage menstrual symptoms, depression or anxiety. In 2008, Agha-Hosseini and colleagues reported that 30 mg/day of the herb taken orally was far superior to placebo in reducing symptoms of PMS and depression over the course of 3-4 menstrual cycles. Four earlier studies also showed Saffron to be an effective anti-depressant.

The big problem with oral administration, said Dr. Schoor, is that Saffron—the dried stigmas of a particular Crocus species—is extremely labor intensive to produce, and therefore extremely expensive. This makes it impractical as an oral remedy in anything but a research setting. Aromatherapy opens up new possibilities though the economic practicality remains to be determined.