How Do Medical Practitioners Feel About SynBio?

Data from Holistic Primary Care’s 2018 Practitioner Survey indicate that healthcare professionals are apprehensive about the rapidly emerging methods of Synthetic Biology (SynBio) and the entry of SynBio ingredients into the food and dietary supplement supply chains. 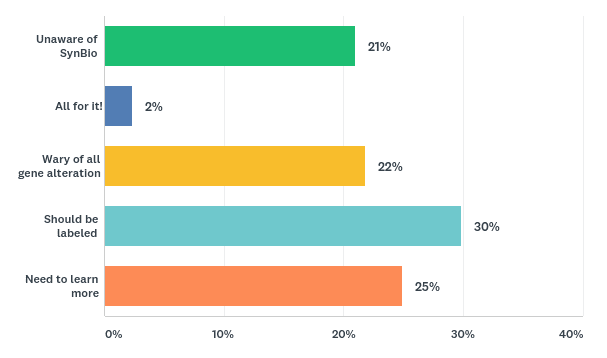 The 469 respondents revealed a wide range of attitudes toward this unique and fast-developing technology, which involves coaxing the genomes of various microorganisms to produce substances–oils, proteins, vitamins, flavors–that they would not normally produce (see SynBio in Supplements: A New Technology Brings New Questions).

Twenty-two percent indicated that they were wary of all forms of gene modification, including SynBio, while only 2% said they were fully supportive of SynBio.

One quarter of the respondents noted that they were aware of the phenomenon but needed to learn more about it before forming an opinion, and 34% indicated that while they were not convinced SynBio is intrinsically harmful or risky, they do believe that products containing SynBio ingredients should be labeled, so consumers can make informed choices.

One in five respondents (21%) said they were completely unaware of SynBio, and the existence of SynBio ingedients in food and supplements, underscoring the cryptic lack of transparency that characterizes this emerging field.

“This is clearly genetic engineering,” wrote one respondent in a verbatim comment. “I am wary. It should be labeled, as should existing GMO in our food supply.”

Another wrote, “There are certainly many unknown risks in genetic modification….However, the positive potential is too great to deny this scientific inquiry and endeavor outright. We need more conscientious regulation. But this is difficult to ensure in a market economy.”