They flee persecution, war, and famine, seeking asylum in a world of unknowns. They carry few outward possessions but inside, they bear very heavy burdens.

That’s the state of literally millions of people around the world these days.

It is no exaggeration to say that globally, the number of refugees is the highest it’s been since World War II. According to the International Rescue Committee (IRC)—a global relief organization founded in 1933 at the request of Albert Einstein—there are now more than 65 million people displaced by war. Add to that a few million more fleeing famine, drought, and natural disasters.

Refugee healthcare has become one of the world’s most pressing medical issues. 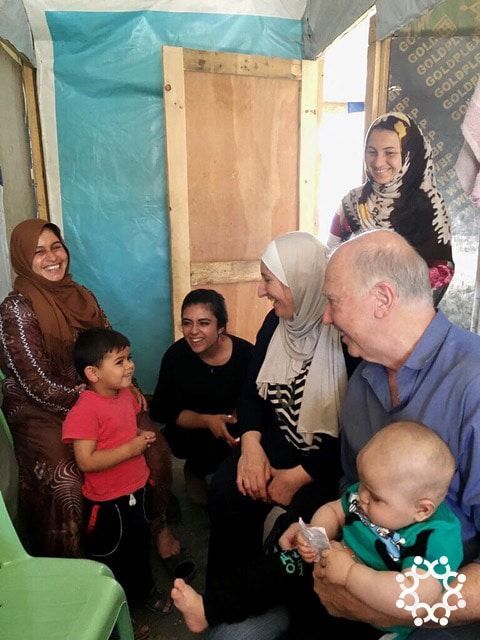 There are dozens of international organizations—notably IRC and Doctors Without Borders (Medecins Sans Frontieres)—providing immediate acute care in the world’s most strife-torn regions. Daily, these groups deliver near-miracles under the most desperate of circumstances.

But once refugees are out of imminent danger and find foothold in places of relative safety, a different set of healthcare challenges emerge.

Offering hope are multiple other organizations, some global, others local, that aid refugees in healing, rebuilding, and integrating—physically, mentally, and socially. Holistic practitioners are playing a vital role in this context.

The Power of Mind-Body Medicine

Here in the US, and abroad, the Center for Mind-Body Medicine is delivering one of the largest and most far-reaching programs for dealing with post-traumatic stress disorder (PTSD) and other fallout from conflict and disaster.

Dr. James Gordon, a Harvard-trained psychiatrist, founded CMBM in 1991,and has been serving refugee populations since the beginning of his career.

With its mission of “teaching thousands to heal millions,” the Center has worked for more than 25 years to bring stress management, yoga, exercise, meditation, guided imagery and biofeedback to refugees, veterans, and victims of disaster.

CMBM has educated over 5,000 teachers, community leaders, and practitioners in places as far afield as Israel, Gaza, Haiti, Jordan, and Kosovo. The Center collaborates with local government and non-government health and social welfare systems, as well as with religious and non-religious communities.

CMBM’s model draws on a wide range of disciplines, all of which foster self-awareness and self-care. Gordon believes these are vital to the healing process. CMBM’s approach is inherently relational. It is grounded in scientific understanding of the connections between thoughts, feelings, and sensations, and between people and their social context.

Though highly systematized and evidence-based, CMBM’s model is also highly flexible. It draws on diverse healing traditions from around the world, which makes it easily translatable across cultures. The basics can be grasped quickly, even by children and people of limited education. Simplicity and speed of access are important factors when working with refugees.

Currently, Dr. Gordon and his colleagues are training over 900 clinicians to help an estimated 160,000 refugees. In Jordan, where there are over 660,000 refugees from Syria, CMBM has just completed first-stage work by training about 75 refugee leaders in basic mind-body self-care and group work. The need is massive: an estimated 54% of displaced Syrians have severe emotional distress and 33% feel unable to deal with basic activities of daily living.

CMBM also works closer to home. In the US, they’ve developed programs for recently resettled Somalis in Minnesota, post-Katrina victims in New Orleans, military veterans coping with PTSD, and Native American communities in South Dakota and other Midwestern states.

“It’s part of our mission, part of our duty, part of our work, part of our joy, to be there for people that have been through so much. If there are ways we can be helpful for them, let’s do it!” Dr. Gordon exclaims.

CMBM’s model nurtures individual resilience, but Gordon says group work is vital for success. “Groups are the single most therapeutic intervention for PTSD, and they’re enormously important…it is easy to teach self-care in a group.”

CMBM practitioners work in diverse cultural settings, but Gordon says there are many common factors in how trauma affects people, and in what can help them heal.

“This model works for virtually every population. For chronic pain, cancer, heart disease, autism, anxiety and depression, ADHD, addiction, alcoholism and more. The model is incredibly flexible as the rules are universal. When one lowers stress it can affect every condition,” he explains.

The Power of Education

Celebrating its 15th birthday, the International Family Medicine Clinic (IFMC) at the University of Virginia Department of Family Medicine is providing refugees with medical homes while simultaneously educating future physicians.

The clinic was founded by Dr. Fern Hauck, a family physician with a longstanding interest in the specific needs of refugees. 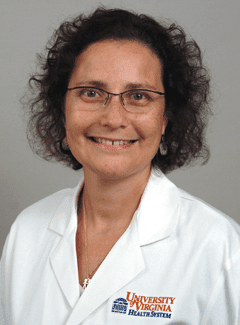 Beyond the direct impact of the trauma they’ve escaped, and the stress of displacement and resettlement in a new land, many refugees have also gone for years without proper medical care—if they ever had it in the first place. They often have limited understanding of health and disease in the modern scientific sense. Many have longstanding, previously undiagnosed infections and chronic diseases.

IFMC provides comprehensive, high-quality, culturally-sensitive care to the growing refugee population in central Virginia. Dr. Hauck and colleagues see over 2,000 refugees per year, from over 40 countries including Congo, Nepal, Bhutan, Afghanistan, Iraq, Myanmar and Syria. IFMC’s medical services are accompanied by a lot of health education, facilitated by interpreters, since most patients have limited English proficiency.

“I’d say we spend 75%-plus of our time doing education,” Hauck said in an interview on WMRA, a regional public radio station. “We really are starting from square one on so many fronts. We’re explaining a lot of disorders and diseases to them. We’re explaining why we need to treat them with medicine and what happens when we don’t treat them.”

IFMC provides full-spectrum family care for as long as patients wish to continue. The clinic works closely with International Rescue Committee (IRC) and the local health department, which provide basic tests and vaccines, and facilitates enrollment in Medicaid.

Each patient gets an initial hour-long consultation. Follow up visits are typically half as long. IFMC makes heavy use of teleconsults for ongoing contact, with interpretation provided by Cyracom—a real-time phone/video translation provider.

The IFMC’s doctors become the patients’ primary care providers, and they’re able to make referrals to on-staff psychiatrists, psychologists, and stress experts trained to deal with trauma and to teach parenting skills. IFMC also has a social worker on staff to assist with transportation, grief counseling and other issues. There is a nutritionist, a pharmacist that helpswith medications, and a care coordinator.

Hauck says the clinic’s ultimate goal is to produce healthy and productive members of the Charlottesville community, and to give refugees the help they need to restore their health, rebuild their lives, and take care of their families. “We work very hard to develop relationships to provide our refugees with pretty optimal care.” 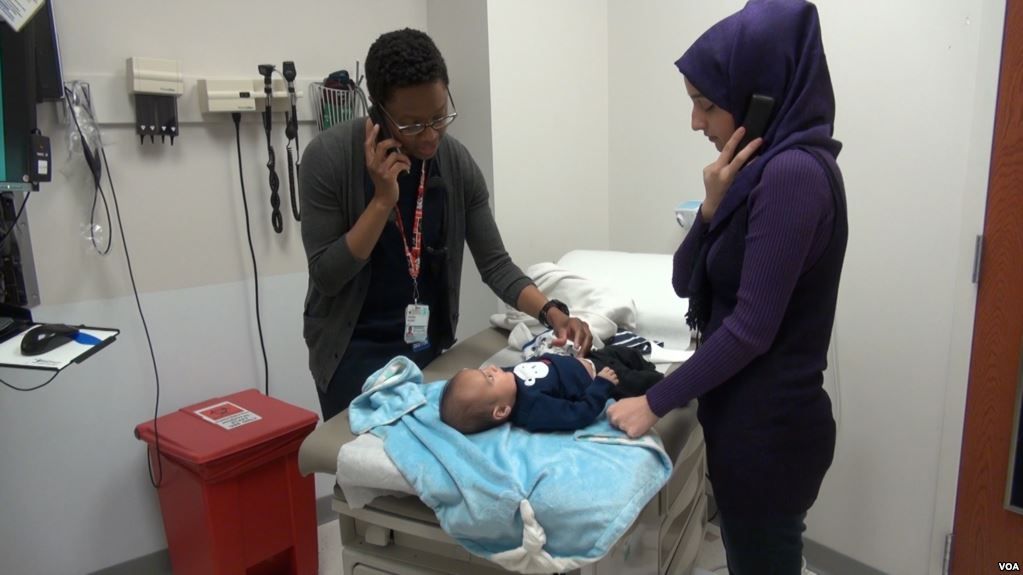 Refugees, regardless of where they come from, have unique medical and psychosocial issues. But IFMC makes a strong effort not to silo them in a hidden corner of UVa’s medical world.

“We don’t have a separate “refugee clinic.” It’s incorporated into our Family Medicine Clinic at the primary care center,” Dr. Hauck explained. It’s part of an overall effort to normalize relationships for the refugees and for the Charlottesville community.

IFMC provides an added benefit in terms of medical training opportunities. Residents are assigned a panel of refugees, learning cultural competency and skills to meet the health needs of new immigrants.

There is a whole curriculum for UVa medical students who rotate through the clinic and learn from an experienced multidisciplinary team dedicated to the care of refugee populations.

Dr. Hauck says her work provides constant lessons about human resilience, strength, and perseverance in the wake of extreme adversity. It also provides many moments of joy. “It’s been incredibly rewarding…to see children who I’ve taken care of when they were 6 or 7 and now they’re graduating from the University of Virginia. That’s pretty incredible.”

The Power of Love 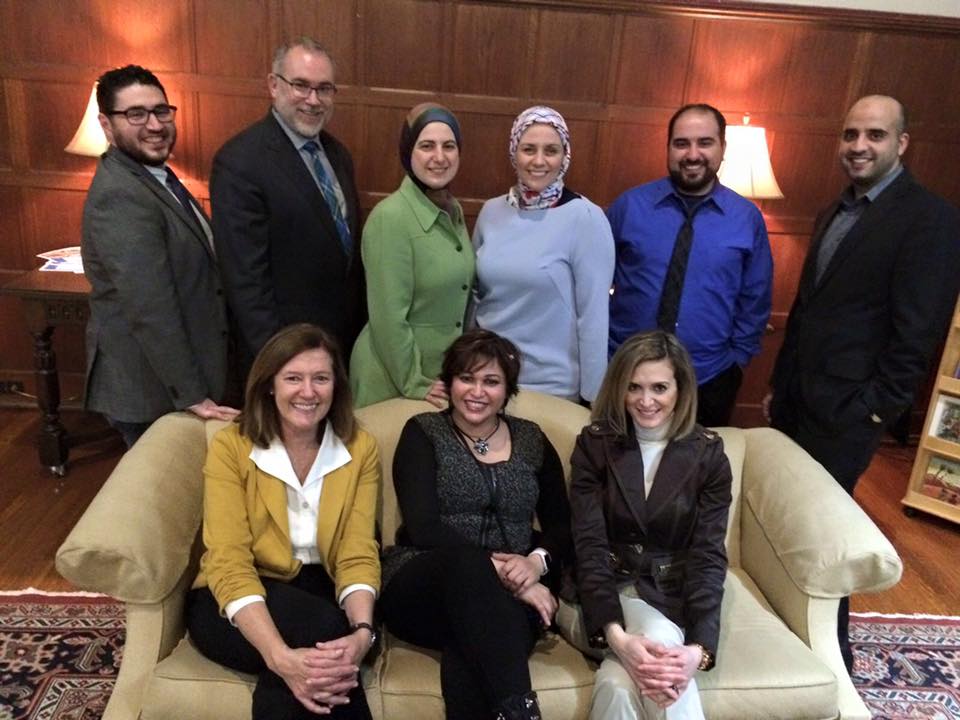 There, she heard many tales of grief and horror, and witnessed firsthand the war’s toll on ordinary people. It was an encounter with a young mother and her 3-day old infant that was the catalyst for action.

The baby was starving despite the woman’s attempt to breastfeed. In her depleted and stressed state, the woman was simply unable to produce enough milk. And there was no formula available anywhere.

“It was a starving baby right in front of me and I couldn’t do anything,” Dr. Fatima recalls. She left Jordan determined to do something when she got home.

With a small core of similarly passionate volunteers, she created SARN in 2015, with the aim of aiding Syrian refugees landing in their community.

Currently, more than 2,000 Syrians have settled in metro-Detroit, with many more expected in the coming years. SARN has established a network of regional medical and social service providers who can provide guidance on housing, education, transportation, medical care, and acculturation. Clinicians affiliated with SARN can make referrals for medical services as needed, often directing people to free clinics in the Detroit area.

The group’s goal is to help these people settle and reach self-sufficiency as soon as possible. The new arrivals are very far from that when SARN volunteers first meet them at the airport in Detroit. Some arrive with little more than the clothes they are wearing, a bag or two, and their memories. With passion, generosity, and pure commitment, SARN volunteers work to help the refugees get on their feet.

Many refugees are educated and had thriving businesses or trades back in Syria. Others have less education and fewer skills. All struggle with massive language and cultural barriers. To help with this, SARN created an elaborate education committee providing language classes, high school and college placement, and vocational training.

The group also provides monthly 6-hour workshops. During these sessions, families are screened for medical and dental problems. Children can participate in art therapy, Lego therapy, and music therapy through SARN’s youth program.

The workshops feature themes like how to start a business, or mind- body stress reduction. Dr. Fatima states that many of the women really love yoga. It is the “best thing for them because they hardly get time for themselves.”

Like IFMC’s Dr. Hauck, Dr. Fatima feels deep respect for the people SARN serves. “No matter what they have gone through they looked forward to the future.”

Though their medical needs are often great, she says it’s important not to lose the forest for the trees. “MDs are trained to look at the physical aspect of their health like getting them caught up in vaccines, but we forget about the mental health care part. They just want a chance to pick up the pieces of their lives and start all over again.” SARN is dedicated to helping them do this.

Amid all the confusion and chaos facing newly arrived refugees, organizations like CMBM, SARN, and IFMC are offering hope and help with open arms. In doing so, they are honoring the deepest precepts of the healing professions.

Madiha Saeed, MD is a holistic family physician in Naperville, IL. She trained at National University of Science and Technology and completed her residency in 2010 at St. Joseph Regional Medical Center. She is board certified in both Family Medicine and Integrative Holistic Medicine, and has a particular passion for women’s’ health and family health issues. A busy mother of four young boys, Dr. Saeed shares her “walk the talk” lifestyle tips and her “bring it on” spirit with families worldwide via her HolisticMomMD website. Her new book, “The Holistic Rx: Every Patient’s Guide to Healing and Preventing Chronic Disease,” will be published in October.