With “Undoctored,” A Physician Stokes the Fire of Patient Empowerment

In his latest book, William Davis, MD, author of the New York Times bestseller Wheat Belly, urges Americans to limit their use of the conventional profit-driven medical system, instead taking most health care needs into their own hands. 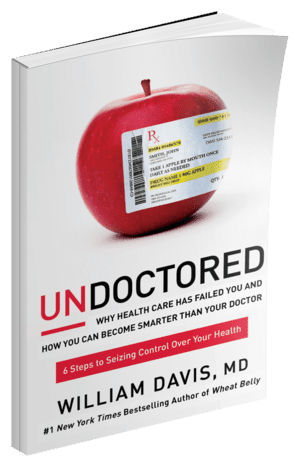 Davis’s new exposé, Undoctored: Why Health Care Has Failed You and How You Can Become Smarter Than Your Doctor, presents a compelling case against hospitals that treat patients as money-making pawns, conventional doctors who dispense questionable advice, and pharmaceutical companies that view human illnesses as business opportunities. Davis argues that because our health care system operates as a revenue-generating industry, Americans face unnecessary daily struggles with ballooning medical costs, unsatisfactory treatment outcomes, and overwhelming frustration towards institutions that aim to address illness, but rarely engender full health and wellness.

People may like to think that hospitals are benevolent institutions, that drug companies have our best interests at heart, or that physicians are incentivized to heal people. The hard truth, according to Davis, is that industry insiders see us all as little more than fuel for their profit-hungry health care systems.

Davis is a controversial figure. A cardiologist practicing in the Milwaukee area, Davis first earned a reputation as something of a medical renegade in 2011 when he published Wheat Belly, a provocative and very popular book that posited modern forms of wheat–which he dubbed “Frankenwheat” as a major driver of cardiometabolic disease, and encouraged the complete removal of wheat and all other grains from the diet.

This new book takes an equally challenging, anti-establishment stance. After discussing the widespread collusion among medical, business, and government players, Davis outlines the book’s namesake: his “Undoctored” program, a handful of guidelines he advises patients to follow to “seize control” over their health.

He also presents a specific nutrition protocol — which includes strict adherence to his trademark grain-free diet — and the use of key nutritional supplements to correct common nutrient deficiencies.

Davis does not advocate for complete abandonment of the health care system — rather, he suggests we strive to access it sparingly, and primarily for urgent, catastrophic situations. While conventional medicine works wonders for acute illnesses, traumatic injuries, and infections, it still cannot effectively manage most chronic disease. The Undoctored program teaches patients to chart the course of their own health and wellness journeys, reducing or eliminating reliance on expensive mainstream medicine as much as possible by replacing it with safe, natural, effective, and less costly alternatives.

According to Davis, patients should enlist the support of a doctor who acts as “an assistant or advocate rather than a director in the health process.”

He encourages individuals to find physicians who practice this philosophy, noting that “empowering practitioners” can be found in a number of disciplines, including functional medicine, integrative health, naturopathy, and chiropractic. Not all holistic practitioners may recommend exactly the same dietary and lifestyle strategies that Davis does. But that’s not the point. In general, holistic clinicians fit Davis’ ideal archetype of a knowledgeable health advocate and partner that can guide patients who want to take charge of their wellbeing.

“I propose that everyday people can manage their own health safely and responsibly and attain results superior to those achieved through conventional health care — not less than, not on par with, but superior” –William Davis, MD

The notion of a conventionally-trained physician–and a specialist no less–urging people to steer clear of the mainstream system as much as possible will likely win cheers from practitioners who are already working outside the mainstream. His indictment of the medical system will surely resonate with some readers who agree that the US medical system is deeply flawed, mismanaging patient care in favor of industry interest.

Others, though, will likely find it inflammatory, accusatory, and reckless, sending a perhaps unhealthy signal that people should distrust their doctors.

Arguably, it is the latter group that would most benefit from reading what Davis has to report. Even without Davis’ instigation, many Americans have already grown wary–and weary–of the mainstream care systems, and are choosing to opt out. This new book provides deep insight into many of the reasons why.

As a cardiologist himself, Davis’s critique of the very system upon which his credibility depends does raise further questions about the intent of Undoctored.

He writes that after his own mother died from sudden cardiac arrest, “[i]t made me question the view that the cath lab was a place to obtain heart health.”

His mother’s passing led Davis on a quest to find methods to track, measure, and curb coronary disease, and his search resulted in a growing awareness about root causes that ultimately led to the Undoctored program. Years of witnessing patients transform their health by following his protocol inspired him to craft the official program and book.

On the one hand, Davis already has an established following and in part uses Undoctored to advertise his own health program. But on the other, he makes many valid points about the often duplicitous, profiteering nature of the medical system.

The heart of the problem, Davis argues, is that we live and work within a system created to treat — and also perpetuate — totally avoidable health challenges. Despite spending more on health care per person than any other country in the world, the US is in the midst of a chronic disease crisis; over 28 million Americans have a diagnosis of heart disease, and nearly 30 million have diabetes, with another 86 million experiencing pre-diabetes.

Davis believes that if we fully tap into the health information, technologies, social networks, and lifestyle strategies now available, the expanding patient-centered care movement could shake up the old medical system in a very positive way.

“I propose that everyday people can manage their own health safely and responsibly and attain results superior to those achieved through conventional health care — not less than, not on par with, but superior,” Davis says.

“Cataclysmic disruption of healthcare is on the horizon,” he predicts. The health system, dominated today by “complacent insiders who provide a product that is unsatisfactory on so many levels and who follow rules of pricing that have no basis in reality and cripple family finances and the national economy,” is ripe for reorganization.

Like other disruptive innovations, he surmises, patients will increasingly find new ways to achieve their own better, faster, more accurate health care outcomes at a fraction of standard costs.

Time will tell whether Davis is correct about that. For the moment, he’s an outspoken medical voice raising issues that demand serious attention.