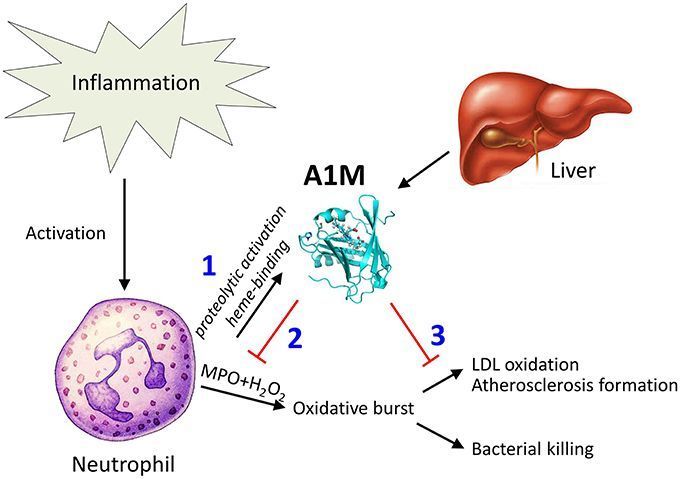 Patients at risk of atherosclerosis may have new hope for cleaner arteries thanks to a naturally occurring “scrubber” protein that exists within the body.

Alpha-1-microglobin (A1M), referred to as a “cleaner” protein by Dr. Bo Åkerström, Professor of Medical Chemistry at Lund University in Sweden, prevents the oxidation of blood fats and can even repair blood fats that have already been oxidized, according to a recent study.

Dr. Åkerström and his team have spearheaded research into the antioxidant properties of A1M, which is produced by all vertebrates and was initially identified 40 years ago. At that time, though, researchers did not understand it’s physiological function.

Åkerström describes this curious protein as a “circulating waste basket” and a “radical sink” that continuously cleans tissues.

A1M participates in the defense against free radicals and oxidation. It does so by binding to free radicals, extracellular hemoglobin, and toxic free heme molecules that are released during hemolysis, converting them into harmless substances that would otherwise cause inflammation and damage to surrounding cells and tissues (Åkerström B, et al. Free Radical Biology & Medicine,2007 Mar 15; 42(6): 842-51).

In a study published last year, Dr. Åkerström and colleagues examined the relationship between A1M and myeloperoxidase (MPO), which has been implicated as a cause in the oxidation of low density lipoproteins (LDL) known as “bad cholesterol” and a factor in the development of atherosclerosis (Åkerström B, et al. Frontiers in Physiology, 2015 Feb 03; 6: 11).

MPO, an enzyme found in white blood cells that contains a heme group similar to hemoglobin, is known to fight infections. It does so by producing cytotoxic free radicals and hypochlorite, which is released into the extracellular space when neutrophils undergo degranulation due to inflammation.

These harmful substances kill bacteria and other pathogens. However, they also cause oxidative damage to surrounding tissues. As a result, LDL molecules may be oxidized and can end up sticking to the walls of blood vessels, causing plaque to build up, resulting in atherosclerosis.

Åkerström’s work, which he summarizes nicely in a brief video, shows that A1M is activated by MPO and interacts with MPO in a similar manner as it does with hemoglobin. A1M acts as a scavenger by binding to free radicals and hypochlorite produced by MPO. It is able to degrade iron and heme-containing substances to neutralize any harmful effects of free iron in the blood.

As a result of its scavenging abilities, A1M protects LDL against oxidative damage from MPO and therefore, may protect against the formation of atherosclerosis.

Due to A1M’s role as a heme-binding free radical scavenger, his group suggests that A1M 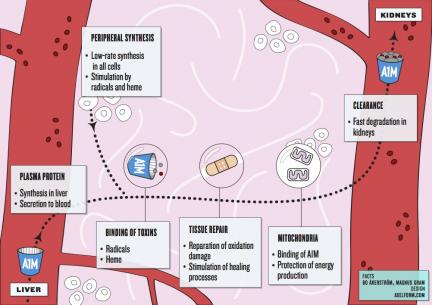 Several studies on animals demonstrate the potential therapeutic use of A1M to treat pre-eclampsia, the most common cause of maternal and fetal morbidity and mortality worldwide.

During pre-eclampsia, extracellular hemoglobin causes oxidative stress, which can lead to renal failure and vascular dysfunction. Several animal studies have shown positive results with the administration of A1M, including the reversal of symptoms and tissue damage to the kidney and placenta. These studies suggest the need for further research (Nääv Å, et al. PLoS One.2015 May 8; 10(5): e0125499. Wester-Rosenlöf L, et al. PLoS One.2014 Jan 28; 9(1): e86353).

Dr. Åkerström says the next steps are to examine animal and human tissue to determine if there is a link between the level of A1M, the concentration of oxidized blood fats and the occurrence of atherosclerosis. If this correlation exists, he believes it is possible to develop an injectable drug to clean the blood vessels of at-risk patients and reduce the odds of atherosclerosis and cardiovascular events.

In the United States, CVD is the cause of 1 in 3 deaths, and it is estimated that 85.6 million American adults currently suffer from some form of it. Globally, by 2030, the number of deaths due to CVD is predicted to increase to over 23.6 million (Mozaffarian D, et al. AHA Statistical Update: Heart Disease and Stroke Statistics—2016 Update: A Report From the American Heart Association. 2016; 133: e38-e360).

With numbers like these a “natural” therapeutic treatment option to combat the buildup of plaque is appealing. Dr. Åkerström envisions a future in which patients would receive monthly infusions of an A1M drug to literally clean their blood vessels.

While this is a viable possibility, it is important to remember there are other actions that can be taken now to improve cardiovascular health and help prevent atherosclerosis and the progression of CVD.

A first line strategy to treat atherosclerosis is the modification of lifestyle habits. Numerous studies over the last decades have demonstrated that diet and lifestyle play a crucial role in the prevention of CVD. The NIH-AARP Diet and Health Study of over 380,000 US men and women showed a Mediterranean dietary pattern—characterized by higher intakes of vegetables, legumes, nuts, fruits, whole grains, fish and unsaturated fat and lower intakes of red and processed meat, was associated with a 22% lower cardiovascular mortality (Mitrou PN, et al.Arch Intern Med.2007; 167(22): 2461-2468).

With statistics as promising as these, it would be worthy to bear in mind Ben Franklin’s famous adage, “an ounce of prevention is worth a pound of cure.”