The people taking statins also had a markedly higher risk of developing obesity, and diabetes-associated complications. 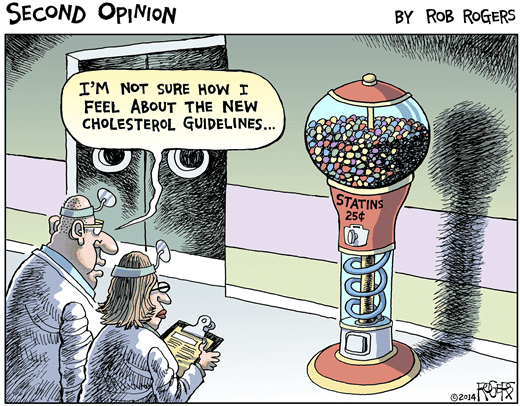 This retrospective case-matched study, which somehow eluded the radar of the New York Times and other mainstream media, is not the first to suggest a link between long-term statin use and higher odds of diabetes Sattar N, Preiss D, (Murray HM, et al. Lancet. 2010; 375 (9716):735-742). But it is the first to show the correlation in people who were free of frank heart disease at baseline.

Ishak Mansi, MD, of the VA North Texas Health System, Dallas, who led the current study, says the elevated diabetes risk seen with statin therapy in past studies, “was thought to be due to the fact that people who were prescribed statins had greater medical risks to begin with.”

Dr. Mansi’s study, while not proving a definitive causal link, suggests that there is an independent diabetes risk tied to use of these drugs that cannot be explained by the “sicker patients” default.

“We expected to find an association, since it has been shown in other studies of sicker populations. But we did not expect an odds ratio of 1.87 in our healthy population.”

He and his colleagues analyzed a database of 25,970 beneficiaries of Tricare, the military health system, who were evaluated between October 2003 and March 2012.

Using a method called propensity score-matching, the investigators compared 3,351 otherwise healthy patients taking statins for primary prevention of CVD with an equal number of non-statin users who were matched for 42 baseline demographic and disease-risk characteristics, as well as for number and types of medical encounters.

The researchers contend that in essence, the only clinically meaningful difference between the two groups was the use of statins.

Those taking statins (primarily simvastatin) had a 1.87-fold increased risk of developing diabetes during the study period. Even more notable was the 2.5-fold increase in risk of diabetes with complications (Mansi I, et al. J Gen Int Med. 2015).

This “very high risk of diabetes complications” had not been shown before in previous studies looking at statins.

In the larger context, when Mansi’s team compared the 3,982 statin users with the 21,988 non-users in the Tricare database, they found a twofold increased risk of new onset diabetes.

Hardly a statin critic, Dr. Mansi believes the drugs “are very valuable for patients when there are clear and strict indications for them.”

However, he contends that short-term drug studies in people with established disease may underestimate long-term risk of adverse outcomes, especially when drugs are given to healthier populations, as is the case with statins.

Though it received surprisingly little media coverage—given how widely statins are prescribed—the Mansi study did generate a fair amount of controversy among statin researchers.

In a lively article published in the pharma industry trade magazine, Drug Discovery & Development, critics of the study, while not challenging the general notion of a statin-diabetes link, contend that the extremely high risk reported by Mansi’s group is due to uncontrolled biases, including:

Dr. Mansi dismissed most of these objections, though he acknowledged that that, “observational studies may still suffer from unrecognized biases despite our best effort. That is why we like to see multiple studies pointing to the same directions.”

He does not believe his findings prove that statins “cause” diabetes, and does not recommend that people currently using statins stop treatment based on this one retrospective study.

But the data should prompt greater dialog between physician and patient, and encourage both to think long and hard about whether statin is truly needed in a given case. Careful consideration is especially important for younger patients who are otherwise in fairly good health despite cholesterol elevations.

“Ideally, it is better to make lifestyle changes and avoid taking statins if possible,” Dr. Mansi said in a Veterans Affairs press statement covering the study.