Using data from the statewide Minnesota Student Survey (MSS), a team of University of Minnesota researchers examined the association between adverse childhood experiences––or ACEs––and the development of overweight or obesity later in life. ACEs include physical or sexual abuse, neglect, household substance abuse, or the death or incarceration of a close relative, along with exposure to extreme violence. 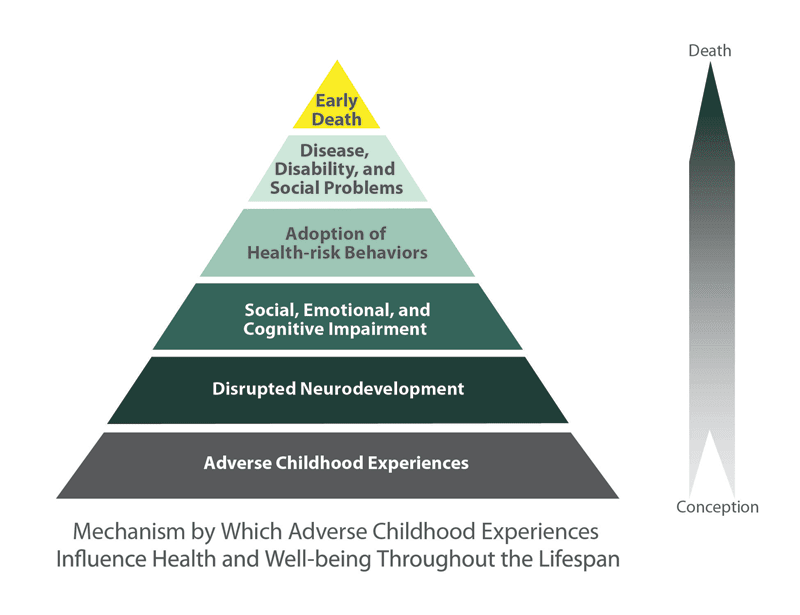 ACE Pyramid from the 1998 ACE Study

The investigators analyzed information collected from over 105,000 8th, 9th, and 11th grade students from across the state, making this the largest study to date of ACEs and their potential role in the etiology of obesity.

They grouped the students based on their height and weight (BMI) into one of five categories: underweight, normal weight, overweight, obese, or severely obese. They also looked at the adverse events self-reported by the kids, including physical abuse, sexual abuse, psychological abuse, familial substance abuse, domestic violence, and parental incarceration.

Controlling for other variables, they found that adolescents who had experienced at least one ACE were much more likely to be overweight, obese, or severely obese than their peers who had not experienced ACEs.

As reported in The Journal of Pediatrics, youth who experienced one adverse childhood event were 1.2 times, 1.4 times, and 1.5 times more likely, respectively, to be overweight, obese, and severely obese when compared with those who did not disclose any ACEs (Davis, L. et al. J Ped. 2019; 204: 71–76e).

Adiposity risk also increased with the number and frequency of ACEs. Adolescents with six ACEs were respectively 1.5, 2.0, and 4.24 times as likely to be overweight, obese, and severely obese compared to students reporting no ACEs. Notably, they found no relationship between ACEs and underweight in this data set.

Child health professionals across disciplines should take note of these patterns.

Pediatric obesity rates in the US are soaring. According to the Centers for Disease Control and Prevention (CDC), the percentage of American children and adolescents affected by obesity has more than tripled since the 1970s. National Center for Health Statistics data from 2015-2016 show that nearly one in five school-aged children and adolescents aged 6 to 19 years were obese. 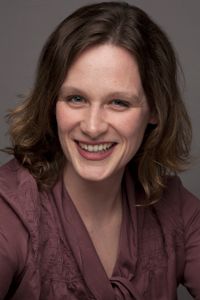 While the ACE study did not examine potential mechanisms for the relationship between trauma and obesity, its lead author, Laurel Davis, PhD, research associate in the Department of Pediatrics at the University of Minnesota Medical School, said that there are likely several possible explanations––with stress being a key culprit.

“First, stress has been associated with changes in eating behaviors in both human and animal studies,” she proposed. “Second, stress has significant effects of the body’s hormonal and regulatory systems, particularly the hypothalamic-pituitary-adrenal (HPA) axis, which has been implicated in weight status.”

“Finally,” Davis said, “it’s likely that the same factors in a youth’s context that predispose them to ACEs also have effects on their access to nutritious food. For example, parental incarceration is associated with reductions in family income, which might cause food insecurity.” Davis’s team is planning future studies to evaluate some of these hypotheses.

A University of Minnesota research brief announcing the study indicates that, like adults, youth who are overweight or obese are at higher risk for developing additional related health problems, each with their own lifelong consequences. Depression, high blood pressure, metabolic disorders, sleep apnea, diabetes, and fatty liver disease are are just some of those conditions.

Figuring out what causes obesity is a question that has long challenged many researchers. Particularly in children, it’s easy to focus on the physical factors that contribute to weight status: diet, food quality, exercise and physical activity.

This new study sheds light on the often overlooked psychosocial determinants that play crucial roles not just in obesity, but in overall health and wellness.

The idea that trauma in the form of ACEs can drive obesity and other diseases is a relatively new one, but Davis’ group is not the only one that’s explored this connection. The landmark Adverse Childhood Experiences (ACE) Study, published in 1998 in the American Journal of Preventive Medicine, was the first to formally introduce the concept into the medical literature.

A collaboration between the CDC and Kaiser Permanente, this project utilized data collected in 1995–1997 from more than 9,500 Kaiser members at a San Diego clinic. Until Davis’ publication this year, it was one of the nation’s largest investigations of childhood traumas and their future health consequences.

In the study, physicians compared patients’ reported childhood experiences of abuse and neglect against their current health status and behaviors. They identified seven core ACE categories––psychological, physical, or sexual abuse; domestic violence; living with household members who were substance abusers, mentally ill or suicidal, or ever imprisoned––and uncovered “a strong graded relationship between the breadth of exposure to abuse or household dysfunction during childhood and multiple risk factors for several of the leading causes of death in adults” (Felitti, J. et al. Am J Prev Med. 1998; 14(4): 245–258).

It’s easy to focus on the physical factors that contribute to weight status: diet, food quality, exercise and physical activity. This new study sheds light on the often overlooked psychosocial determinants that play crucial roles not just in obesity, but in overall health and wellness.

These studies underscore the fact that health or illness are determined by far more than one’s genetics or underlying biology alone. With regard to weight and obesity risk, forces like socioeconomic status, quality of life, and mental health conditions like depression and anxiety all have significant influence.

The new University of Minnesota study reveals that adverse childhood events are far more prevalent than many clinicians might realize.

The authors say that their findings parallel a recent report from national surveys showing that nearly half of all US children have experienced at least one ACE. Between 40%-50% of youth in their sample who reported having overweight, obesity, or severe obesity also reported a minimum of one ACE. The more ACEs a child encounters, the higher his or her disease risk becomes. In some cases, the consequences are immediate.

“This study adds to our understanding of childhood overweight and obesity by showing that the relationship between ACEs and weight problems is evident even in adolescence,” said Davis.

Prior studies exploring the associations between ACEs and obesity have mostly involved adult participants, and they generally suggest a strong association between childhood exposure to ACEs and obesity in adulthood. By utilizing anonymous reports from adolescents––which, according to Davis, are found to be highly reliable––she and her colleagues were uniquely able to clarify the impact of ACEs in the time period shortly after they actually occurred.

“The advantage of asking youth to report their ACEs is that it removes a potential source of bias: caregiver reluctance to report,” she explained. Many ACEs are either perpetrated by parents––as in the case of physical or emotional abuse––or a cause of shame or stigma for the family, like mental illness or involvement in the criminal justice system. Allowing youth to directly report their own ACEs obviates this problem, Davis said.

The mounting evidence from ACE studies compels health practitioners to recognize the strong relationship between ACEs and disease risk, beginning in adolescence and extending into adulthood.

With appropriate education and awareness, ACEs are both preventable and treatable.

“Doctors should be aware that ACEs have the potential to compromise health and wellbeing in childhood and throughout the lifecourse,” Davis encouraged, adding that “addressing [a] patient’s ACEs is a critical part of health promotion.”

She also suggests that “due to the high prevalence of ACEs, clinical training programs should consider adding training in this area for new child health trainees, so that clinicians are prepared to screen for and respond to their patients’ disclosure of ACEs.”

Davis and her colleagues have not examined the efficacy of specific ACE assessment or treatment protocols, but they urge practitioners who work with young people to consider standardized screening for ACEs and to make referrals for appropriate psychosocial interventions as needed.

A number of ACE screening tools exist. A 2017 paper published in Academic Pediatrics identified and analyzed 14 different methods, including a new ACE measure that is now part of the larger National Survey of Children’s Health (NSCH-ACEs).

“As for the types of services a physician should refer to, that is a complicated choice that should be based on a number of decisions, including but not limited to the type, timing, and severity of the ACE, the family’s context and resources, their capacity to engage in services, and the types of services that are available in the community in which the child lives,” Davis pointed out.

“Our most basic recommendation is that physicians work in collaboration with other professionals––social workers, community mental health workers––to connect families to appropriate services.” She added that “treatments that involve children’s caregivers are highly efficacious.”

The CDC offers a list of ACE resources that include training materials, journal articles, and other educational tools for practitioners, families, and communities alike.

Most importantly, clinicians should be aware that “ACEs have a profound impact on both mental and physical health. Early life adversity is one of the most powerful social determinants of health across the lifecourse,” Davis said. “For almost every condition for which the association has been examined, ACEs have been found to be related to poorer health.”