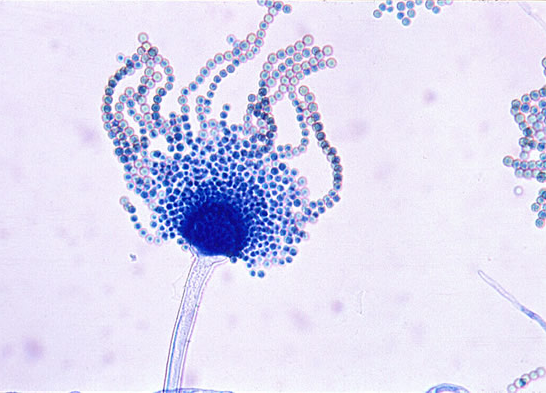 A unique tool that measures the volume of brain structures is helping clinicians detect signs of mold-related illness.

NeuroQuant, a software product developed by the cleverly named CorTechs Labs, provides volumetric measurements of different regions of the brain. The technology works in tandem with magnetic resonance imaging (MRI) or computerized tomography (CT) to identify areas of potential neurodegeneration.

There is increasing evidence pointing to associations between CIRS and myriad cognitive and neurologic abnormalities. Patients with CIRS report a broad range of symptoms, including headaches, memory problems, difficulty with concentration or word finding, numbness, tingling, a metallic taste in the mouth, and vertigo (Shoemaker, R et al. Neurotox and Teratol. 2014; 45: 18-26).

“I think of it this way: an MRI of the brain is looking at the tip of the iceberg, and NeuroQuant delves deep under the cortical surface to see what is going on underneath,” Gazda added. At her neurology practices in San Antonio, Texas and Louisville, Colorado, Gazda treats patients with an array of complex neurological conditions.

In under 10 minutes, NeuroQuant provides image analysis that previously required dozens of hours of skilled professional interpretation. The test pulls data from standard brain MRIs, and rapidly calculates the volume of several different brain structures. It can also measure how an individual’s brain stacks up against a normative database adjusted for age, sex, and intracranial volume.

NeuroQuant is an analytical interpretation tool, not a brain imaging tool; to make use of it you must first order an MRI for the patient.

Once that’s done, though, the process is fairly simple: the radiologist uploads your patient’s full-brain 3D T1 non-contrast MRI images to CorTechs via a secure platform. Within 10 minutes—sometimes as few as 5—the system returns a “new, full-volume, spatially corrected, and automatically labeled image dataset,” according to the company’s website. It also estimates the patient’s Hippocampal Occupancy Score (HOC), an indicator of hippocampal volume loss and mesial temporal lobe atrophy.

If the patient’s ID number is already in the NeuroQuant system, indicating that he or she has already had a NeuroQuant analysis, the system will automatically provide analysis of current and previous images with comparisons and descriptions of the changes. 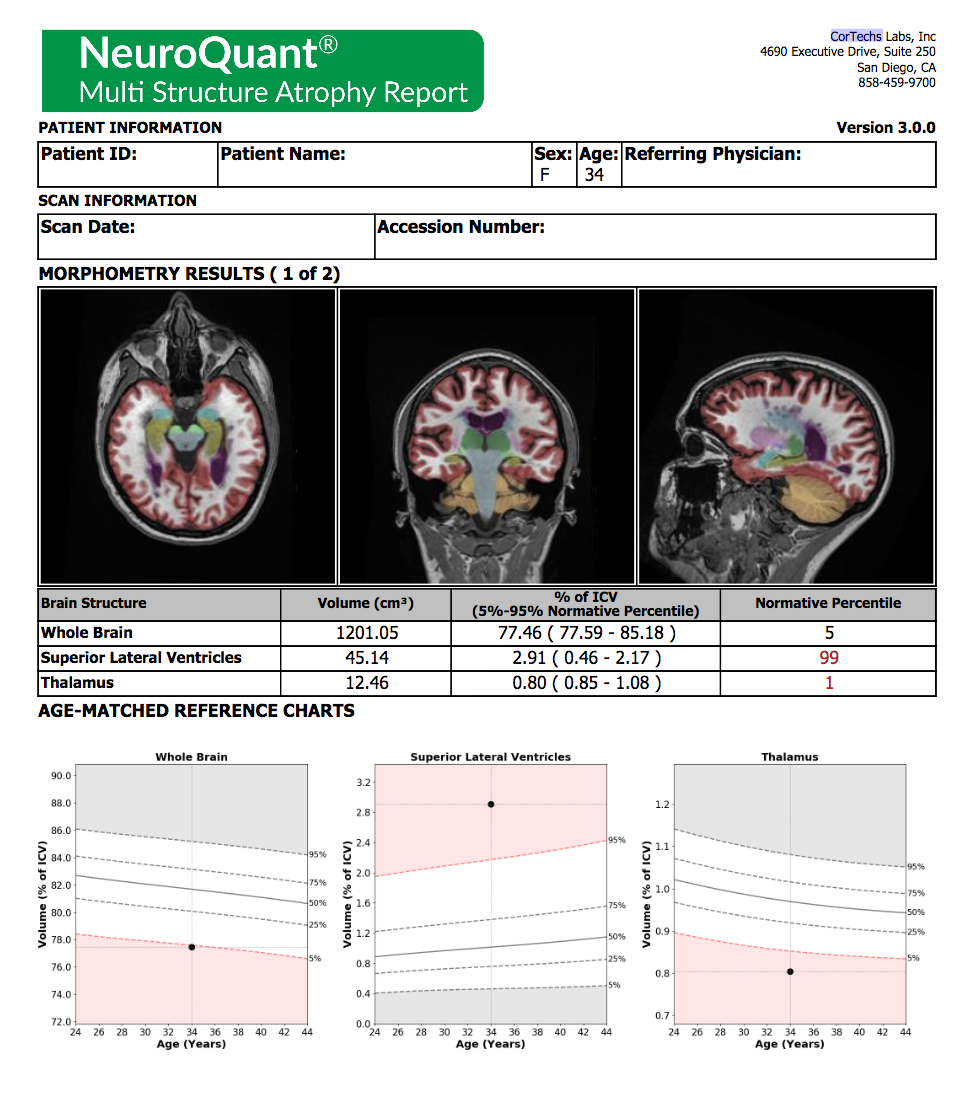 “A NeuroQuant MRI can be very, very helpful looking for areas of the brain that are highly inflamed or areas that are developing serious neuronal loss and degeneration,” Gazda said. The test “provides biomarkers that can help predict diseases like Alzheimer’s,” she explained. It can also be helpful in diagnosing Parkinson’s disease (PKD), ALS, MS, autism spectrum disorder, epilepsy, traumatic brain injuries, and autoimmune encephalopathies as well.

A growing body of CIRS research is revealing the neurological complications associated with chronic exposure to biologically-produced toxins, including mycotoxins.

Ritchie Shoemaker, MD, a general practitioner in Maryland, coined the term CIRS after studying an outbreak of Pfiesteria, a toxic dinoflagellate that killed fish and sickened more than 300 people in the Chesapeake Bay area between 1997 and 2001.

Since then, the CIRS definition has expanded to encompass inflammatory illnesses caused not only by the dinoflagellate fish-killer, but other types of cyanobacteria, spirochetes, apicomplexans, and fungi.

The most common cause of CIRS is exposure to mycotoxins, typically associated with molds like Stachybotrys, Penicillium, or Aspergillus (Bredesen, D. Aging. 2016; 8(2): 304-13).

He was among the first physician-researchers to recognize the pattern of neurocognitive changes associated with chronic mold exposure, and to use NeuroQuant analysis to quantify those changes.

When evaluating patients for neurological problems, she said, “mold is always in the differential (diagnosis).”

“I believe mold and mycotoxins are one of the biggest silent epidemics of our time. There are numerous studies documenting fungi, fungal fragments and/or fungal DNA in the brains of patients with MS, ALS, PKD, and Alzheimer’s disease,” she added.

Gazda also treats pediatric patients, including many with PANS (Pediatric Acute-onset Neuropsychiatric Syndrome) and PANDAS (Pediatric Autoimmune Neuropsychiatric Disorders Associated with Streptococcal infections). “Almost all of them in my practice have had very high levels of mycotoxins,” she said.

Dr. Carnahan reports similar observations. CIRS is “quite commonly an underlying cause of neurodegenerative issues, cognitive decline, autoimmunity, and many other common diagnosis,” she said. She estimates that 50 to 75% of her patients with complex illness exhibit symptoms directly related to mold exposure.

Geographical location and climate factors can also increase CIRS risk. “I think the incidence of this problem depends on where you live,” Gazda proposed. “I live in South Texas and we have hot, humid summers and the HVAC (heating, ventilation & air conditioner) systems are always on. HVAC systems are notoriously susceptible to mold growth,” she explained.

Water-damaged buildings (WDB) that promote mold proliferation are a top source of biotoxin exposure for many Americans. An estimated 50% of buildings in the US are water-damaged, Gazda said.

On top of that, roughly one third of the population has genetic polymorphisms impair the capacity to safely detox and recover from toxic mold exposures.

Despite the prevalence, identifying CIRS in an individual case can be a challenge. Symptoms vary from patient to patient, and often mimic the signs of other chronic conditions. In some people, it shows up as new-onset cognitive issues; in others, biotoxin exposure induces neurological symptoms like numbness, weakness, or tingling.

Mold illness may also persist long after a patient’s initial contact with a biotoxic source; with constant exposure, mycotoxins can accumulate and wreak long-term havoc in the body.

According to Dr. Gazda, “A good environmental and past medical history, even going back to childhood, is important.” She recommends that buildings where patients live or work “should be tested by a reputable indoor environmental professional (IEP).”

On the lab testing front, an expanded Mold Immunoreactivity Panel recently introduced by Alletess Medical Laboratories will help practitioners improve the detection of patients at risk for mold-induced CIRS and other negative effects of mycotoxin exposure.

The Alletess array is the only mold panel on the market to offer the IgA assessment. It can detect exposure to 16 of the most common and problematic molds, including Aspergillus fumigatus, Rhizopus nigricans, Candida albicans, Alternaria alternata, and Cladosporum herbarum.

For patients vulnerable to mold toxins, Carnahan stressed that “avoidance is key.”

Patients need to understand that in favorable—which usually means damp—conditions, mold can start to grow in under 36 hours.

Carnahan’s tips for minimizing mold exposure include the following:

“No one should live or work in a moldy home,” Dr. Gazda urged. “We all need to be on the lookout for mold––but remember, in most cases we cannot smell or see it.”

To keep homes mold-free requires frequent inspections for moisture and immediate repair of any water leaks. “One of the biggest challenges in all of this is getting a successful remediation done,” she said. Despite its widespread use as a surface sanitizer, she pointed out that “bleach will not kill mold.”

High-quality air purifiers can help. IQAir, AirDoctor, and Molekule are a few reputable brands. In humid climates, it is wise to check HVAC systems for mold growth at least once a year. “HVAC systems are the lungs of the building, and we acquire mold toxicity through the air, our skin, and with any moldy food that is ingested,” Gazda warned.

“I must add though, it is never one thing in this day and age that brings down the brain. We are under assault from multiple environmental attacks. I say get outside as much as possible, breathe fresh air, and eat a healthy, organic, non-GMO diet to help lower inflammation and toxic load.”

The good news is that once it is identified, mold illness is treatable, according to Dr. Shoemaker. 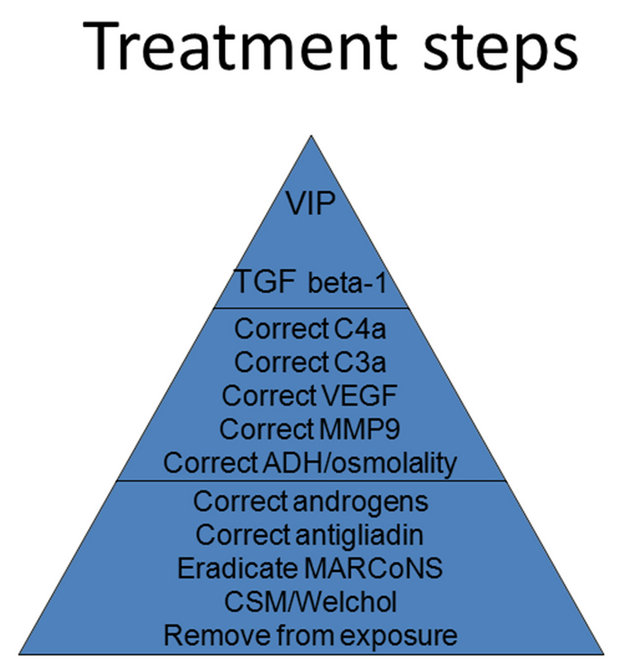 Shoemaker’s therapeutic approach is based on the idea that the out-of-control immune response observed in people who’ve been exposed to molds is due to a humoral deficiency of a regulatory neuropeptide called vasoactive intestinal polypeptide (VIP).

He contends that 98% of people fitting the CIRS profile have VIP deficiencies. Based on a 20-patient open-label trial he conducted in 2013, he holds that daily use of a nasal spray containing VIP can normalize the inflammatory parameters and mitigate many of the symptoms associated with chronic mold exposure.