Ginseng and curcumin, two herbs with long histories of use in traditional Asian medicine, have beneficial effects in people with cancer, according to two new studies presented at this year’s annual meeting of the American Society of Clinical Oncology (ASCO).

Curcumin (Curcuma longa), also known as turmeric in the kitchen, may be able to reduce the burden of dermatitis in patients undergoing radiotherapy for breast cancer. A clinical trial involving 30 women with breast cancer showed that daily supplementation with turmeric reduced the severity of radiation dermatitis a

nd other symptoms of treatment.

Julie Ryan, PhD, MPH, and colleagues at the University of Rochester Medical Center studied 30 patients with non-inflammatory breast cancer, who were receiving radiation therapy. The patients had a mean age of 58.1 years, and 90% were white. Ten percent had undergone total mastectomy, and 43.3% were receiving concurrent chemotherapy. They were randomized to take placebo capsules or four 500-milligram capsules of curcumin three times a day.

Patients in the curcumin arm had a median radiation dermatitis score of 2.6, compared to a score of 3.4 among those in the placebo group. Of those taking curcumin, only 28.6% had moist desquamation at the end of radiation treatment, compared to 87.5 % in the placebo arm. A larger trial of 700 participants is underway to confirm the findings.

Another study presented at ASCO looked at the potential of American ginseng (Panax quinquefolius) to reduce the fatigue that commonly follows conventional cancer treatment.

“Ginseng in any preparation has been anecdotally noted in worldwide culture as something to improve your fatigue,” said Ernie P. Balcueva, MD, an associate professor at Michigan State University College of Human Medicine in Grand Rapids. Ginseng is readily available over the counter in the US, in a powdered pill form, he added.

“Ginseng has always been marketed as something to improve your fatigue, but they don’t necessarily say it improves your mood or depression,” added Dr. Balcueva, who presented data from a Phase III evaluation of American ginseng (Panax quinquefolius) to improve cancer-related fatigue.

He and his colleagues studied the effect of Wisconsin-grown ginseng in 364 patients undergoing treatment for a wide variety of different types of cancer. “We used Panax quinquefolius, rather than Chinese of Korean ginseng, because it is the most widely studied in US, and we want to conduct a larger trial based on data that’s already available from preliminary studies in the US,” he said, noting that the study was conducted by a cross-section of US-based researchers.

Patients were eligible for the study if their fatigue rated at least a four on a scale of 1-10, for at least a month (higher numbers equating to more fatigue). However, patients were ineligible if they were diagnosed with central nervous system lymphoma, brain malignancies, or if they reported prior use of ginseng or chronic systemic steroids.

“We presumed cancer treatment is a root cause of the fatigue, but there are some tumors by themselves 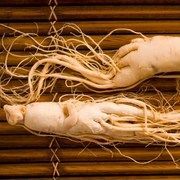 that can cause you to experience fatigue as a symptom. If you don’t sleep eight or more hours a day, or if you’re under stress for many other reasons, you could also have fatigue. Likewise, if patients have lymphoma or brain malignancies, or if they are on steroids, such as prednisone, they may already be experiencing fatigue, which is not necessarily (cancer) treatment-related,” Dr. Balcueva explained.

The patients were randomized between October of 2008 and July of 2011. Those patients in the ginseng arm received 2,000 milligrams of powdered ginseng (in tablets) daily for a total of 8 weeks, Levels of fatigue were re-assessed in both groups at four and eight weeks.

The investigators looked at the mental, emotional, and vigor subscales of the Multidimensional Fatigue Symptom Inventory, along with the fatigue-inertia subscale of the Profile of Mood States. There were no significant differences at four weeks, but at eight weeks, patients in the ginseng group showed a mean MFSI score of 20, compared to 10.3 in the placebo group (p = 0.0029). A higher number on the MFSI indicates better function and less fatigue.

Ginseng may exert it’s anti-fatigue effects through the central nervous system, Dr. Balcueva speculated. “It could also have an effect on the skeletal muscles, because the fatigue could be a feeling of muscle weakness,” he said, adding that relatively slow absorption of the product may lead to a delayed effect, since the effect was not seen at four weeks, though by week eight it had become significant.