Home | Topics | Cooking For Health | From the Mystical to the Medicinal, Mushrooms are Having Their Moment
View Cart

From the Mystical to the Medicinal, Mushrooms are Having Their Moment

Friedrich Nietzsche probably wasn’t thinking about mushrooms when he said, “That which does not kill us only makes us stronger.” But he might

Worldwide, there are 2,000-plus species of cultivated and wild edible mushrooms. All provide solid nutrition—even the seemingly vacuous white button variety. Some produce medicinal compounds.

Whether in the kitchen or the clinic, mushrooms are the subject of rising popular interest these days, at least in the US. In other parts of the world, they’ve been a vital part of healthy living for millennia.

Though people tend to think of mushrooms as “vegetables,” they are much more like meat than anything that actually comes from the plant kingdom. Like meat, mushrooms do contain protein (though comparably less than animal flesh) and have a satisfying chew and a savory “umami” quality beloved by foodies all over the globe.

Mushrooms are rich in fiber, acting as prebiotic sustenance for the beneficial microflora in the digestive tract. They also contain minerals like potassium and selenium plus vitamin D. They possess vitamin B by way of folate as well as trace amounts of B-12, otherwise found only in meat.

Mushrooms can inspire confidence in the kitchen because they are almost impossible to overcook. This is thanks to their high chitin content. More heat actually deepens their flavor, and many mycologists and dietitians recommend cooking mushrooms thoroughly to increase their digestibility (What to make, then, of all those chopped raw mushrooms at the salad bar?).

Incorporating mushrooms into a patient’s diet can only do good. They’re largely comprised of water — up to 90 percent –so eating them creates a sense of satiety, or fullness, with minimal calories. They’re very high in fiber, and they enrich meals without any cholesterol, gluten, or fat (beyond that used in their preparation).

Outside the culinary realm, mushrooms have played a role in the healing arts for centuries. Though the use of mushrooms as therapeutic agents is not nearly as prevalent in Western medicine as it is in Asian medical traditions, the mycological world has certainly made important contributions to the allopathic toolbox. It’s easy to forget that mainstay drugs like penicillin and the statins have mycological origins. 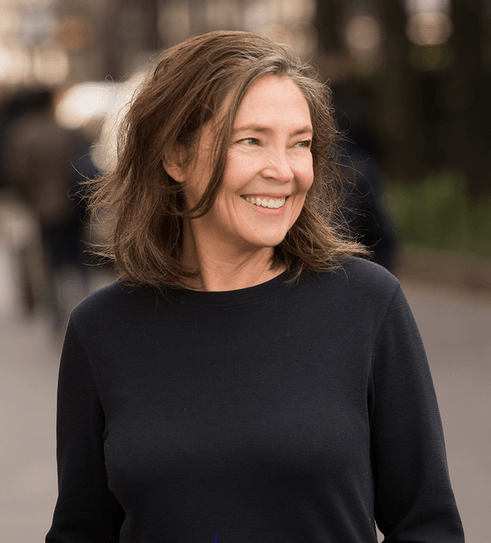 In her 2011 book Mycophilia, author and researcher Eugenia Bone estimated 1.5 million species of fungi exist. Since then, researchers have identified more, to the point that the number has doubled, even tripled. Mushrooms’ overwhelming quantity and diversity has presented challenges in understanding their therapeutic benefits.  Many types are anti-inflammatory, antimicrobial and antiviral, but each species has its own unique characteristics.

Mushrooms have existed in nature for millennia.  One of the largest, an Armallaria gallica or honey mushroom, occupies 925 acres in Michigan, with an estimated weight of 880,000 pounds and dates back at least 2,500 years. This monster mushroom started, as all mushrooms do, from a single spore.

Among the most studied mushrooms in regards to medical application are:

Shiitake (Lentinus edodes): This Asian mushroom, first earned its cred back in the Ming Dynasty. Cultivated for their rich flavor, as well as their health properties, chewy shiitakes count among the happiest intersections of healing and gastronomy.  They contain a polysaccharide called lentinen now being used in Japan in extract form to treat cancer.  Further research indicates shiitake extract may serve as a complement to conventional cancer treatment, working to boost immunity and increase stamina.

Reishi (Ganoderma lucidum): Another Asian mushroom used in healing for centuries, Reishi has some new science behind it.  It is being studied for its power to support the cardiovascular and respiratory systems. Recent findings show it may reduce cholesterol and with it, risk of heart disease. It also exhibits potential as a treatment for lung cancer. While Reishi can have a certain bitterness by itself, it blends beautifully with other ingredients in stews and stir fries. It is even starting to appear on the market in coffee and tea blends.

Lion’s Mane (Hericium eraneus): This is one of the most fashion-forward species, a puffball with white icicle-like tendrils. These tendrils become quite tender when cooked and their faintly crablike flavor has generated much culinary interest. In a Japanese study, Lion’s Mane was found to improve mild cases of cognitive impairment. Anecdotal evidence also shows it can combat depression and increase energy.

Even the humble button mushroom (Agarus bisporus) shows promise as a means of regulating hormones and enzymes, and treating breast and prostate cancer .

Turkey tail (Trametes versicolor): These mushrooms go beyond chewy, they’re downright leathery.  Anecdotally, this beautiful fungus has a reputation as a cancer cure. Popular mycologist and mushroom whisperer, Paul Stamets, credits turkey tail with curing his mother’s breast cancer. That’s not exactly a clinical study, but it does carry weight with many people interested in natural medicine.

Stamets, who often sports a pith helmet made from dried mushroom fiber, was a mushroom true believer well before his mother got ill.  His companies, Host Defense and Fungi Perfecti , promote everything mushroom– from culinary mushroom-growing kits to medicinal mushroom tinctures and capsules.

Fungi Perfecti’s Loni Jean Ronnenbaum makes no claims that the company’s mushroom products can treat or cure any illness.  However, the National Institute for Health chose Host Defense’s Turkey Tail capsules for a Phase 1 clinical study looking at immune system support in women with breast cancer. 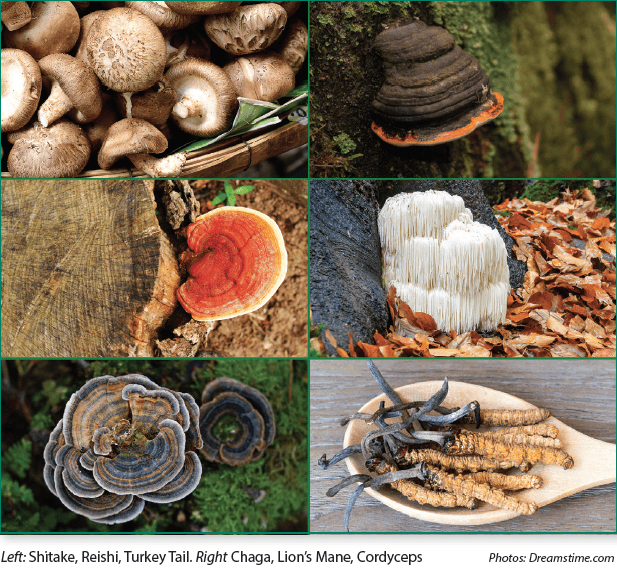 Chaga, (Inonotus obliquus):  A relatively recent entry into the American medicinary, this tree fungus has a long history of use in northern Europe and parts of Russia.  There’s some evidence to suggest it may have a role as a complementary cancer treatment with significant potential to suppress or reduce tumors , at least in vitro. But chaga is definitely not a kitchen superstar. It is rock-hard in texture and bitter in taste, and must be taken in tincture, suspension or supplement form.

Cordyceps (Cordyceps sinensis): These slender-stranded, endoparasitic mushrooms have a very strange life cycle: The spores enter various species of insects—adults or larvae—and germinate. The mycelia infiltrate the insect’s nervous system, eventually killing the host, replacing its tissue with mycelium, and ultimately producing an elongated fruiting body that grows out from the insect’s head, culminating in the production of a spore-forming tip that perpetuates the cycle.

Though deadly to a wide range of arthropods, Cordyceps produce compounds that offer immunomodulatory and tumor-shrinking benefits for humans. 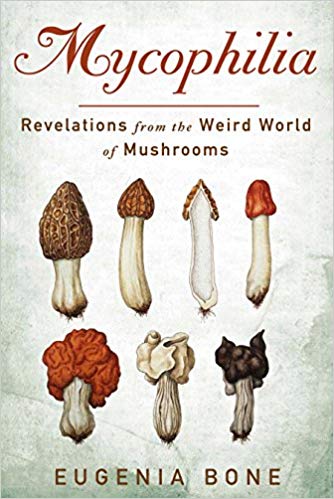 This peculiar species is only one of many mushroom species being studied to confirm what Traditional Chinese Medicine and Ayurvedic medicine practitioners have known for centuries: mushrooms definitely earn their place in the clinic as well as the kitchen.

Cordyceps has shown measurable effects in a wide range of physiological systems. Those fortunate few who have foraged cordyceps in the Himalayas where they occur naturally, say they are delicious. But for the vast majority of people around the world, Cordyceps extracts are the only affordable option.

Be aware however, that Cordyceps mushrooms are in high demand and short supply, raising the specters of ingredient adulteration, substitution, and spiking with synthetics.

Not all medicinal mushrooms are gastronomic or medicinal, in the conventional sense of the term. Psilocybin, aka “magic mushrooms” and other species containing hallucinogenic compounds are notoriously nausea-producing, “Yet we eat them willingly,” notes Bone.

The appeal isn’t the digestive misery, of course. It’s the psychotropic effect.  Ancient cultures prized psylocibin  for the same reason, using it in religious and sacred ritual. It is now being used in clinical trials for its dramatic and long-lasting ability to treat addiction, reduce anxiety and depression, ease post-traumatic stress disorder and help end-stage cancer patients come to terms with death.

Consumer interest in mushrooms is, well, mushrooming these days. So is innovation within the mushroom products space. In the US alone, mushrooms and mushroom-related products reaped nearly $5 billion in sales in 2017 and is expected to hit $7.4 billion by 2121, according to Grand View Research.

This of course has resulted in a carnival of marketing hype. Author Eugenia Bone is wary of extravagant claims of mushrooms curing everything from diabetes to erectile disfunction. More solid studies are needed before Turkey Tail —  or any species — can be integrated as standard cancer therapy.

“People want the silver bullet,” she says, but with so many species, there is no one mushroom to rule them all.

Rather than focusing on one specific mushroom for one specific benefit, Bone recommends eating a variety of mushrooms, not just for health 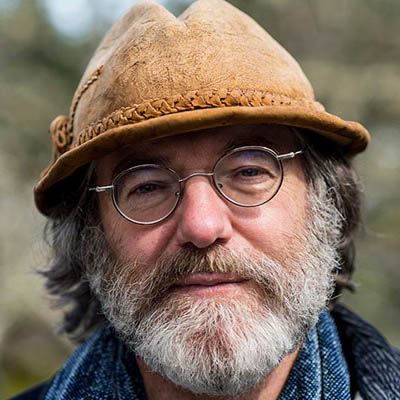 but for pleasure, especially when they’re in season, when their flavor is brightest, and their nutrient density greatest.

Spring is when morels (Morchella elata)–among her favorite mushrooms– start to appear.

Bone got into mushrooms because she likes to eat them, but the more she learned about them, the more intrigued she became.

Mushrooms have applications beyond just the culinary and medicinal. They can be used as textiles and natural dyes.  One innovative San Francisco-based company, MycoWorks, is developing a range of versatile, high-performance leather-like materials from Ganoderma and Pleurotus mushroom species. MycoWorks is also exploring mushroom-based materials for construction and furniture-making.

More Than Meets the Eye

There’s more to mushrooms than meets the eye. Literally. What most of us call “mushrooms” are actually the visible fruiting bodies of the fungi. Beneath the surface is a whole network of filaments–the mycelia–that lace through the soil, taking in nutrients.

Mushrooms are prized in the kitchen for their ability to soak up the flavor of sauces, and spices. But their very porous nature, means that they’re equally good at soaking up pesticides, fertilizers, waste run-off, heavy metals and other environmental toxins. That means it’s important to select organically cultivated mushrooms or mushroom-based foods and supplements.

Of course, there’s always the option to forage for your own wild mushrooms—presuming you have access to clean, untainted land and you know an experienced forager. Remember, misidentifying mushrooms can be fatal. The Czech have a saying — “All mushrooms are edible — once!”

In the wild, in the clinic and in the kitchen, “Fungi are full of interesting properties,” says Bone. “There’s a lot to be explored.”