These are just some of the ingredients Chef Sean Sherman and his team use to create tasty and nutrient-dense dishes at Sioux Chef, a company founded by Mr. Sherman in 2014.

Sherman, a member of the Oglala Lakota tribe in Pine Ridge, who has been a professional chef for 30 years, says he got the inspiration for Sioux Chef several years ago, on a trip to Mexico. While there, he experienced first-hand how the Huichol people have maintained their indigenous diet and lifestyle He returned to the US, and proceeded to learn all he could about his own indigenous foods.

Over the past five decades, the US government’s federal commodities program has been providing supplemental foods to Native Americans living on reservations, with the stated intention of providing nutritional support for tribal groups displaced from their lands. But these commodity food streams have historically included canned meats, bags of refined wheat flour, lard, blocks of cheese, corn syrup, and evaporated milk.

In other words, they are loaded with sugar, refined carbs, trans fats, and many other ingredients that engender not health but disease.

Within a generation the ill-effects of a diet heavy on processed foods began to emerge among Native Americans. Up until 1940 diabetes was virtually non-existent in these communities. By the mid-1960’s, diabetes among Native Americans began to be seen increasingly in the literature (Szathmary EJ. Ann Rev Anthropol.1994: 23:457-82).  Very similar patterns were observed in the 1970s among native Inuit populations in Alaska: within a generation of adopting a diet high in processed food, these hardy people became burdened with diabetes and heart disease.

The trends have only gotten worse since then. Consider these 2018 statistics from the Office of Minority Health:

Given what we know about the high prevalence of diabetes among white Americans of European descent, the situation in Native American communities can only be described as dire. 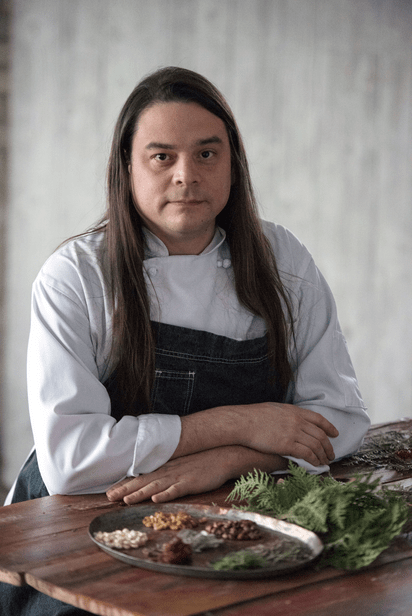 I had an opportunity to talk with Chef Sherman by phone. He explained the concept of “decolonizing the diet” and how his dishes are made without wheat flour, gluten, sugar, beef, pork, or dairy products. These foods did not exist here prior to the arrival of Europeans.

His journey in developing Sioux Chef was one of researching the traditional wisdom and practices of his ancestors. In developing his menus Chef Sherman combines this knowledge with his own experience growing up on the reservation in South Dakota.

When asked what he sees as the main health benefits of eating ingredients indigenous to the local area, Sherman points to the diversity of plants, their nutrient density, and their low glycemic value.

Indeed, the nutrient value of some indigenous wild plants is quite high. These include Cattail shoots, Lambsquarters, Rose Hips, and Stinging Nettles, to name a few.

In an excellent review article published in 2014, Katherine Phillips at Virginia Tech and a team of researchers studied the nutrient composition of ten wild plants traditionally used as food by Native Americans in North Dakota. All were rich in manganese, and most were rich in the following nutrients, typically providing greater than 10% of the recommended daily intake per serving:

Although the traditional Oglala Lakota diet is predominantly plant-based, meat and fish also have a place at the table. This includes rabbit, bison, walleye, and whitefish.

Sherman and his colleagues at Sioux Chef are deeply concerned about the health of the next generation of Native Americans. He sees a revival of indigenous foods as a major factor in averting the tornado of chronic disease this generation will face if they continue to eat processed, denatured junk food. The younger people want to do things differently.

“The younger generation, the millennials, are seeing the suffering of the older generation from food choices.”

In addition to Sioux Chef, Sherman helped to launch the Tatanka Food Truck, an enterprise in Minneapolis that markets indigenous “pre-contact” foods of the Dakota and Minnesota native culture. The experience with the food truck gave him first hand experience of the ways young people will enthusiastically embrace indigenous, healthy foods when given the option in a context that appeals to them.

Beyond the individual health benefits, indigenous foodways give back to the environment. Chef Sherman discussed how eating what grows locally and in season is a major theme at Sioux Chef. His team is big on foraging, wild-crafting and the rediscovery of native farming methods, land stewardship, and food preservation techniques.

Spending time taking care of the plants and foraging the wild grown plants provides a spiritual connection with and awareness of the food we put inside our bodies. Reclaiming one’s culture and identity is a potent force that can have a positive effect not only on the biological aspect of health but equally on mental, emotional and spiritual aspects as well.

Expanding and helping others

In addition to Sherman and chief operating officer, Dana Thompson, Sioux Chef employs several other professional chefs, a caterer, and an operations manager. Among them is Brian Yazzie, one of two Chefs de cuisine at Sioux Chef. Yazzie is a Navajo (Dine) Chef from the Navajo Nation in Arizona.

As a company, their mission is to educate both native and non-native peoples, and make indigenous foods more accessible to as many communities as possible. It does this by working through the North American Traditional Indigenous Food Systems (NATIFS), a nonprofit comprised of two parts, the Indigenous Food Lab and the Indigenous Sustainable Food Summit.

The Indigenous Food Lab supports the growth and development of indigenous restaurants and other food-related businesses on tribal lands throughout the region. It functions as an educational center, a restaurant, and a provider of technical assistance to indigenous businesses. The other side of the non-profit, the Indigenous Sustainable Food Summit, focuses on supporting the region’s Native heirloom varieties of corn, beans, and squash, wild rice, smoked fish, and game.

The organizations make liberal use of technology platforms such as Facebook to share information on ancestral knowledge–how to use native corn in place of wheat, for example–and to foster discussions on reclaiming health through reconnecting with traditional foods. 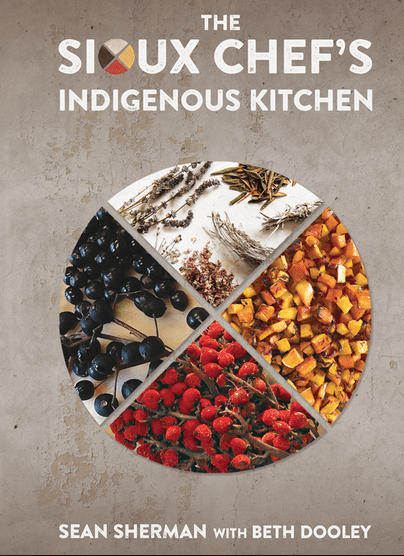 photos that, on first glance, give the impression that these are time-consuming gourmet-type recipes. On closer look I was surprised at their simplicity, and felt encouraged to try a few out.

A recipe for Amaranth Crackers popped out at me, partly because of how simple it looked with only 4 ingredients, and mostly because amaranth is a familiar ingredient to me being from my own indigenous heritage.

Sioux Chef’s activities extend beyond the main goal of decolonizing the diet. Members of the team network with several like-minded organizations. The I-Collective is one such organization, a group of native herbalists, seed-keepers and chefs.

They also work at the policy level. Two years ago, the USDA’s federal commodities program known as the Food Distribution Program on Indian Reservations (FDPIR) began offering a few indigenous ingredients such as wild rice and bison. Mr. Sherman has been involved in the process of making that happen. The availability of indigenous ingredients through the program varies by region. Wild rice and bison may be local to one part of the country, while blue cornmeal may be the main indigenous staple in another region.

Though they are entitled to utilize programs offered by the Indian Health Service (IHS), Native Americans living in urban areas often have less access to hospitals, health clinics, or contract health services offered by the IHS and tribal health programs. These tend to be focused on people living on reservation land, for obvious reasons. But in reality, the vast majority of Native Americans live in major cities—a fact that surprises many people.

For health practitioners working in communities where Native Americans live, here are some ideas on how you might help connect your native patients with this vibrant indigenous food movement:

Here are a few links for more information, ideas, and contact information on how you might be able to help address these health issues:

Ana Maria Puente holds a Master of Science in Nutrition and Integrative Health and a Certificate in Health and Wellness Coaching from the Maryland University of Integrative Health (MUIH).  She has a long history working in heath and public health beginning as an RN working with Apache, Hopi, and Navajo people on reservations in Arizona. She