Losing Ourselves to Diabetes…Then Alzheimer’s

Alzheimer’s disease currently affects about 5.4 million Americans. That number is expected to rise. In part, due to the rampant prevalence of diabetes.

According to a recent study published in the journal Neurology, brain tangles accumulate in people with type 2 diabetics even if they are free of dementia or other signs of cognitive impairment.

Diabetes affects not only the body, but also the brain. According to senior researcher, Dr. Velandai Srikanth, a geriatrician at Monash University in Melbourne, Australia, the disease may cause brain “shrinkage,” and other abnormalities that pile onto degenerative changes that ultimately lead to dementia.

The higher dementia risk for people with type 2 diabetes could partly be due related to stroke and to the narrowing of arteries supplying blood to the brain. But it could also be related to diabetes-specific degeneration in brain tissue.

In their study comparing 124 older adults with type 2 diabetes with almost 700 non-diabetic people, Srikanth and colleagues observed that the diabetics had thinner brain cortices and higher levels of tau protein in their spinal fluid, indicative of more tangles in the brain (Moran C, et al. Neurology. 2015: 85 (13): 1123-1130)

Some patients in this study had Alzheimer’s, others had milder problems with memory and thinking, while still others were mentally 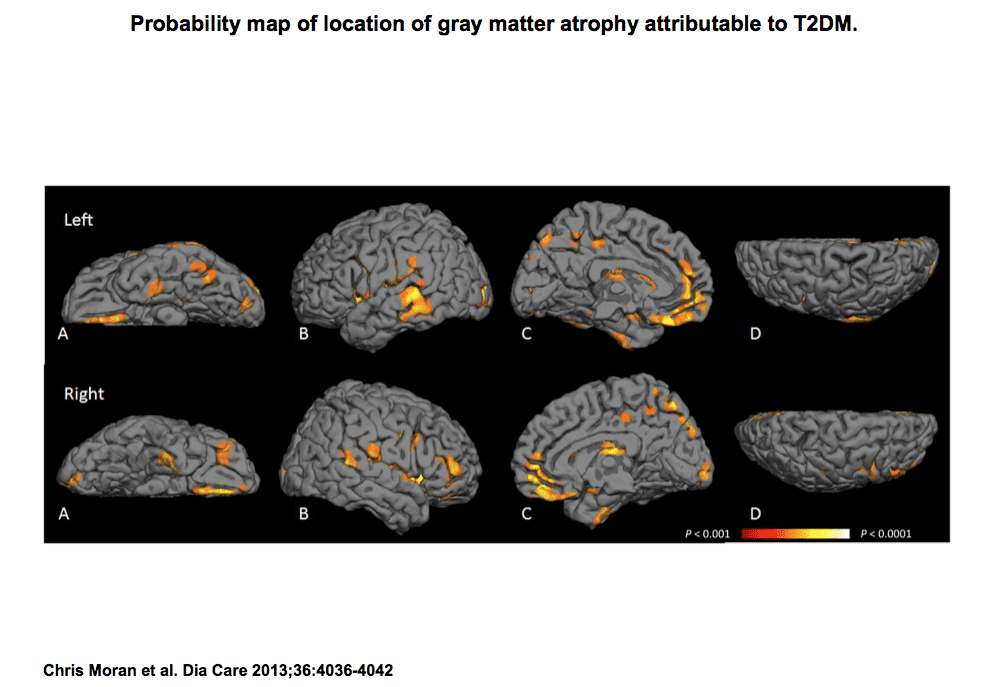 sharp. But the association between diabetes and brain changes held up even after controlling for present cognitive function.

The study participants underwent MRI brain scans, and about half had samples taken of their cerebrospinal fluid to measure levels of beta-amyloid and tau proteins that make up the plaques and tangles seen in Alzheimer’s-affected brains.

The results “clearly [show] that type 2 diabetes is associated with an increase in [tau] and a decrease in cortical thickness,” said Kalipada Pahan, a professor of neurological sciences at Rush University Medical Center in Chicago.

Piecing Together the Puzzle

The study did not prove causation between type 2 diabetes and these changes, and Srikanth says more research is needed to clarify the etiology.

As with most chronic diseases, multiple factors are at work, such as chronically high blood sugar, low-grade systemic inflammation, and/or obesity, which is linked to a greater acumination of brain tangles. Diabetes is known to enhance inflammation, which is a cornerstone of Alzheimer’s-type dementia.

There is “an interesting body of evidence” tying obesity to tau, Srikanth explained. A US study published in Molecular Psychiatry reported a link between middle-age obesity and earlier Alzheimer’s onset. Brain autopsies have also revealed that Alzheimer’s patients who’d been heavy at age 50 had more brain tangles compared with those at normal weight.

Srikanth noted that diabetes boosts a process called glycation, where sugar molecules latch onto proteins. “It’s possible that glycation of an important brain protein is involved in tau buildup,” Pahan said, adding that this has yet to be shown definitively.

Yet research does show that blood glucose, when elevated, can attach to various proteins in the body, which can increase the production of both free radicals and chemicals involved in inflammation. This can cause direct toxic effects on brain cells by increasing both inflammation as well as free radicals through protein glycation.

The implication, according to Dr. Pahan, is that preventing or at least controlling diabetes could be one way to combat tangle formation in the brain.

Insulin resistance is also a factor. Insulin plays an important role as a trophic hormone in the brain, making it important for the health and vitality of brain cells. When the brain becomes insulin resistant, problems arise.

What’s scary is that even slight elevations of blood sugar, well below the range where diabetes becomes a concern, can raise the future risk for developing dementia, according to a study published in the New England Journal of Medicine. (Crane PK, et al. N Engl J Med 2013; 369:540-548)

Some studies have documented a link between increased blood sugar with a shrinkage of the hippocampus, the brain’s memory center. As the hippocampus shrinks, so does memory and recall. Researchers describe a variety of factors associated with type 2 diabetes that could lead to brain dysfunction, including impaired neurogenesis — the process by which we are able to grow new brain cells, specifically in the hippocampus.

Blood-brain barrier function is also dysregulated in patients with diabetes. This sets the stage for entry of otherwise excluded proteins and even bacteria into the brain, leading to nerve cell damage. (Enzinger C, et al. Neurology; 64(10):1704-11.)

Simple lifestyle changes can stabilize blood sugar, optimizing and preserving brain health. Lowering carbohydrates, focusing on vegetables, consumption of healthy fats and protein help stabilize the blood sugar. Getting about 20 minutes of aerobic exercise activates DNA turning on the growth of the hippocampus.

Given that there is no “cure” for Alzheimer’s, prevention is key. Regulating sugar levels is the cornerstone in helping to keep the darkness from annihilating who we are, who we have been, and who we can become.