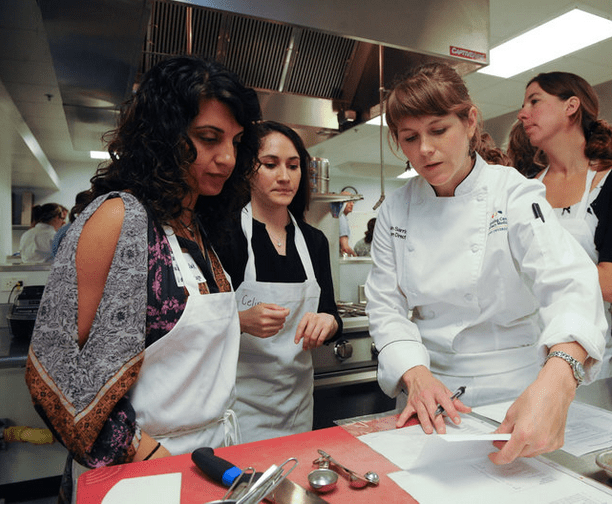 The connection between food choices and wellness goes back at least as far as ancient Greece (you know — Hippocrates, the guy who gets credit for saying, “Let thy food be thy medicine and thy medicine thy food”).

While nutrition education has been a longstanding med school requirement, in most schools it is cursory and clinical. It’s about concepts, not food.

But that’s starting to change. The good news is, major medical schools are (finally) starting to embrace culinary medicine by teaching medical students about real food—and how to prepare it.

“That becomes a powerful moment, when you can bring all those people together,” says Dr. Timothy Harlan, executive director of Tulane University’s Goldring Center for Culinary Medicine. Collaboration between medical, nutrition and cookery professionals results in nourishing food worth eating, and provides an overarching understanding of how what we eat can enhance — or endanger— our lives. It creates the missing link between food and medicine.

Medicine and food have been on the outs pretty much since the death of Hippocrates. For centuries we’ve lived in a world where doctors did “healthy,” chefs did “cravable,” and rarely the ‘twain did meet until 2007 when Harvard’s T.H. Chan School of Public Health partnered with Napa’s Culinary Institute of America at Greystone to create the Healthy Kitchens, Healthy Lives conference, now an annual event (registration for the 2019 conference is now open).

Tulane University School of Medicine took that concept and in 2012, integrated a culinary medicine course into its med school curriculum. Since then, over 50 medical schools across the country including the University of Southern California, George Washington and Case Western Reserve have licensed the program and made it their own.

At the University of Central Florida (UCF) med school in Orlando, 13 students just completed the school’s four-week culinary medicine pilot program. The course, offered as an elective to fourth-year students includes hands-on time in the kitchen.

But it’s not all fun and cauliflower-crust pizza.

“We’re not trying to create chefs,” says Dr. Robert Karch, UCF’s associate professor of pediatrics. Instead, the goal is to enable doctors to better communicate with their patients about how nutrition and food choices affect their health. Students are presented with case studies of patients with diverse disorders and are asked to determine how food choices “can impact and help heal,” and most of all, to provide patients with practical solutions.

That’s the program’s strength, says Tulane’s Dr. Harlan. “It’s great to play in the kitchen, but we’re also providing practical strategies, to take all the stuff we learn in the first couple years of medical school and translate that into a conversation you’re going to have in the exam room with your patient. ‘What are you doing for breakfast? Have you tried eating this? Let me give you a recipe.’” 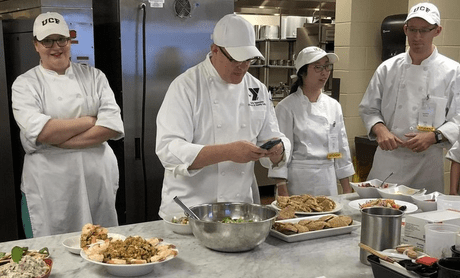 the kitchen and at the table.

Does it sound like old-school home economics? It is. “They’re old teachings we kind of lost. The young generation has no idea how to prepare food or where it comes from. So we’re teaching these things again in modern society.”

Partnerships make culinary medicine more effective in the kitchen and beyond.

At UCF, the med school partners with the university’s Rosen School of Hospitality Management. One day a week, medical students work in the school’s state-of-the-art kitchen, where they learn kitchen literacy and have time to devote to meal prep. The program also partners with the local YMCA, where the course’s graduates teach free culinary medicine cooking classes.

Doctors who can truly address nutrition and cooking skills can be wellness game-changers for individual patients, but teaching it to local communities, incorporating it into public health policy “is where the rubber meets the road,” says Dr. Karch.

As a pediatrician at Nemours Children’s Hospital, Karch sees the critical role nourishing food plays in the lives of his young patients. Many are living proof of the staggering rise of childhood obesity and diabetes. He also treats undernourished infants and toddlers showing failure to thrive, and food-insecure families struggling to get by on WIC and SNAP programs.

“We have lots of ideas about partnerships,” including working with other local health initiatives, local farmers markets and community gardens. “If we can make small changes over time, we can positively influence behavior and health.”

Culinary medicine offers takeaway for doctors and med students both professionally and personally. “I can see firsthand how stress and burnout affects physicians,” says Dr. Karch. “We can fortify ourselves through healthy eating and mindfulness.”

Chefs also stand to benefit. They already know how to make meals delicious. But working with dietitians and physicians helps them demystify food crazes, and identify easy ways to increase the nutrient-density of what’s on their menus. Adding beans and chopped vegetables to pilafs or pasta, for example, increases the fiber and protein content, and adds flavor and eye-appeal while maintaining or even reducing costs.

Since Tulane implemented its culinary medicine study in 2012, “we have not stopped developing,” says Harlan. “And the best thing is it’s all happened organically.” The Tulane team has created outreach and education modules for kids, seniors, and expectant mothers, as well as a Spanish language series. That’s on top of the “31 major modules on the professional side.”

In time, Dr. Karch wants UCF to offer similar programs. Orlando is already a destination for many national medical conventions, and he’s eager to show that the city has more to offer than Mickey Mouse. He hopes to attract physicians from around the country to visit UCF medical school and discover the richness of culinary medicine.

In the meantime, the course is clearly a winner among med students. This coming term, enrollment has already hit 48 — the maximum class capacity.

Both Tulane and UCF have begun longitudinal research to measure the outcomes of culinary medicine on both patients and med students.

But Dr. Karch can already conclude two things: “This intersection between food and health has opened up a vast world of opportunities,” and “It doesn’t matter if it’s healthy. If it’s not delicious, people won’t eat it.”