At the Tex-Mex Border, Healers Bring Compassion, Care, and Acupuncture 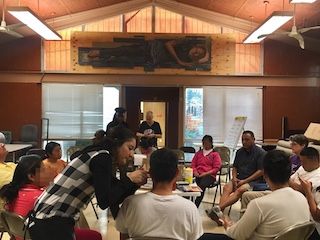 and aid workers throughout the Rio Grande Valley.


The Brownsville–Matamoros Gateway International Bridge connects the south Texas town of Brownsville to the Mexican city of Matamoros. In theory, the bridge is a designated point of entry at which individuals can legally apply for asylum in the United States. But in the wake of recent immigration policy changes, the asylum application process there and in other nearby border towns has slowed to a near halt, local activists say.

Instead of waiting to greet asylum seekers at Customs and Border Protection (CBP) booths, CPB agents are now systematically stationed at the exact midpoints of this and the other international bridges along the Rio Grande. They require those asking to enter the US to first present identification, prior to a second regular inspection at the customs booth. This new practice has resulted in massive lines and significant crossing delays.

CBP claims the cumbersome procedure is necessary because the agency is “at capacity,” lacking adequate personnel to properly process asylum seekers. At present, only a handful of migrants attempting to enter the country via the Brownsville–Matamoros bridge are actually allowed to cross each day.

Consequently, groups of migrants with few resources and nowhere else to turn are now camping out underneath several of the international bridges spanning the Rio Grande. Living outdoors while awaiting the opportunity to cross the border means enduring constant exposure to dangerous conditions: extreme high and low temperatures, heavy rains, crime and violence.

For those permitted to enter the US, the challenges only continue. The detention centers release anywhere from 300 to 400 people every day. Most have nowhere to go. The majority are immediately shuttled into immigration detention centers––prison-like facilities––where they may be held for weeks or months at a time. Some are separated from their family members, in accordance with the Trump administration’s controversial “zero tolerance” policy.

Community members in the Brownsville area report that Immigration and Customs Enforcement (ICE) officials have simply dropped immigrants off at local bus stations without food, money, or much of anything else. Some immigrants receive notices, in languages they may or may not read, to appear in court. Most struggle to understand the complex asylum paperwork they’re handed.

Outraged by the scenes unfolding at their neighborhood bus stations and bridges, residents on both sides of the border have stepped in to offer donated supplies, legal assistance, and other vital forms of support––including medical care.

Nam-Thu Tran, a graduate student at the American College of Acupuncture & Oriental Medicine in Houston, saw an opportunity to complement 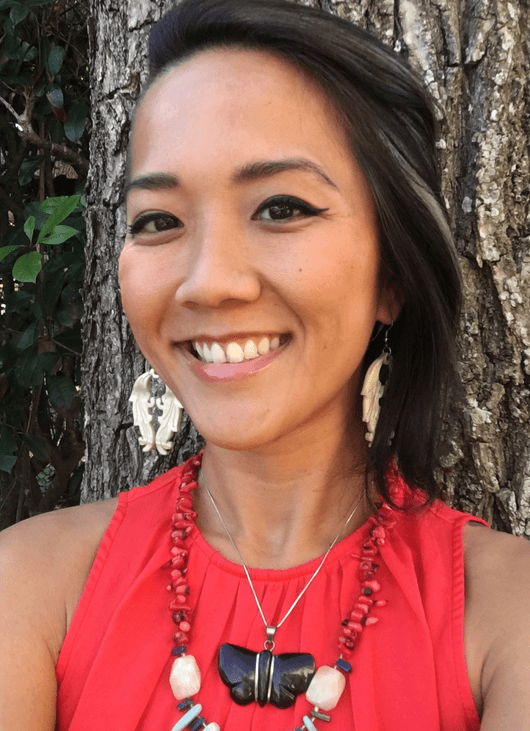 existing humanitarian aid efforts by bringing healthcare and healing into the migrant camps. Tran recently completed a training with the disaster relief nonprofit Acupuncturists Without Borders (AWB). Shortly thereafter, she partnered with community groups already volunteering in the camps to set up temporary acupuncture clinics for patients in both Texas and Mexico.

In the Brownsville area, two nonprofits in particular helped inform AWB’s work at the border. The female-powered Angry Tías y Abuelas of the Rio Grande Valley––a coalition consisting mostly of aunts, mothers, and grandmothers horrified by the abusive and neglectful treatment of immigrants––organized early programs to deliver food, water, and other basic supplies to migrants in the spring of 2018. Unlike the asylum seekers themselves, the relief workers are permitted to freely cross the bridges and borders each day.

What began as a one-time event quickly grew into a massive ongoing project. The Angry Tías y Abuelas group expanded its efforts to distribute emergency backpacks and gift cards for homeless and bewildered individuals released from detention. They also organized fundraisers, supported other volunteer groups working in border regions, and educated immigrants about the pro bono legal services available in the area. 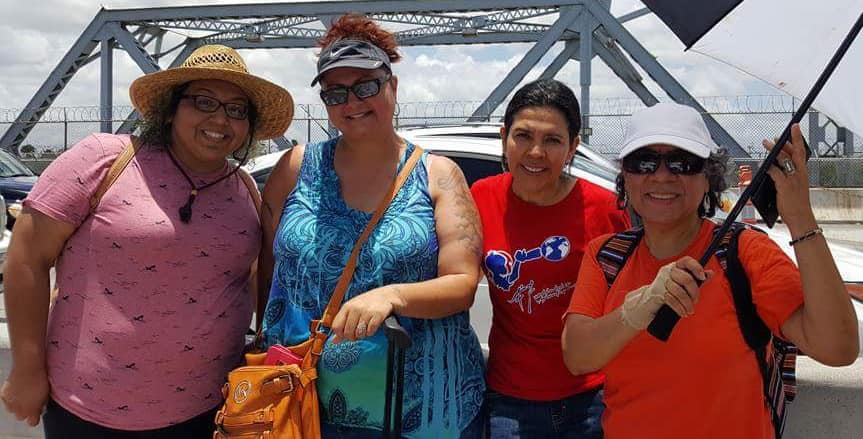 Another local program, Team Brownsville, has played an instrumental role in serving the migrant community in south Texas. Resident Mike Benavides and his partner, Sergio Cordova, have done everything from orchestrating donation drives and cooking meals for asylum seekers to coordinating volunteer doctor groups and helping immmigrants make sense of confusing court documents.

Through these groups, and the trust they’d established with those living in the camps, Tran found a welcome venue for her temporary acupuncture clinics.

“The collaborative efforts of Texas border communities are truly inspiring,” she reflected.

The daughter of refugees who fled the American war in Vietnam in 1975, Tran felt deeply drawn to help serve immigrants currently stranded at the border. Their story and hers are all-too-similar: Tran was born to refugee parents seeking asylum from war and violence.

With the help of fellow volunteer clinicians, she hosted AWB’s first acupuncture clinic at the border in Brownsville in January of 2019, followed by a second clinic later in March. At both events, acupuncturists provided free care not only to migrants and asylum seekers, but also to numerous humanitarian aid workers, first responders, and community members volunteering in the Rio Grande region.

As people began to pile up at the Brownsville border, so too did the number of alarming personal and public health concerns.

“Above all, though, I would say despair is predominant and causes many other health conditions as a result,” she added.

Fried explained that a number of volunteers have also fallen ill or experienced symptoms of secondary trauma––the emotional duress that occurs when an individual hears about the firsthand trauma experiences of another.

Making matters worse, a recent report published by the nonprofit environmental law organization Earthjustice warns that the facilities in which migrants are temporarily housed can themselves pose additional serious health threats.

The group analyzed records from a planned government facility intended to house 7,500 unaccompanied migrant children at Goodfellow Air Force Base in San Angelo, TX. They found that the forthcoming detention center was set to be built on top of a landfill, “in an area filled with major potential health risks, particularly for children.”

“The area is contaminated with lead, arsenic, benzene, PFAS (per- and polyfluoroalkyl substances), and other chemicals associated with increased risk of cancer and neurodevelopmental damage,” the report states. “Other contaminants detected at the site include volatile organic compounds, or VOCs, which contaminate the air and threaten human health through vapor intrusion causing nausea, headaches, and damage to the nervous system, kidneys, and liver.”

Tran wanted to bring acupuncture into the migrant camps as an antidote to the hazards and traumas the asylum-seekers are facing. AWB follows the National Acupuncture Detoxification Association (NADA) Acudetox protocol, a simple 5-point ear acupuncture formula used for alleviating stress, insomnia, anxiety, depression, addiction, and post-traumatic stress symptoms. The NADA protocol was first developed in the 1970s at Lincoln Hospital in New York for use in drug and alcohol treatment programs.

In addition to acupuncture, AWB volunteers offer “a lot of love and support and continuity of service, all of which are important parts of the picture, too,” Fried said.

Through her work, Tran met immigrants who’d traveled to the US–Mexico border from as far as Bangladesh, Africa, Europe, Central and South America, but “not very many Mexicans––contrary to what we’re led to believe in popular media.”

In the face of hate, we are choosing to give with love.” ––Nam-Thu Tran, Acupuncturists Without Borders

Regardless of a patient’s country of origin, AWB’s mission is to treat all individuals suffering from trauma and to “intervene in trauma cycles that perpetuate fear and hatred.”

Fried founded Acupuncturists Without Borders in September 2005 in the aftermath of Hurricanes Rita and Katrina. She organized over 25 teams of volunteer clinicians to travel to New Orleans and offer free community acupuncture treatments for 8,000 patients in Louisiana, including evacuees, residents, first responders, emergency personnel, volunteers and other care providers.

In the decade and a half since then, AWB has expanded to provide emergency relief and resiliency-building support to numerous communities affected by natural disasters as well as human conflict, environmental devastation, poverty, and social injustice. Today, the nonprofit has programs that serve patients across the globe, from US war veterans to Syrian refugees in Greece.

A key component of the AWB program is its focus on training practitioners to provide trauma reduction treatments in their own communities. This is a prerequisite for working in more strife-ridden conditions such as the detention centers at the border.

For clinicians interested in spearheading health programs in disaster-stricken areas, Fried cautions that, “it takes training and a lot of leg work.”

“It is really critical to become familiar with the physical tools and skills needed, and also the psychological tools” required to provide effective emergency relief, she said. She encouraged health practitioners to seek out trainings to learn appropriate disaster response procedures.

Acupuncturists Without Borders offers an introductory Healing Community Trauma training that is open to health professionals of all backgrounds. Many other community emergency relief organizations also offer regular local disaster response trainings, too.

“We would never recommend that someone simply go out into the community in a disaster and try to help, without background and preparation. There are many issues that can arise that require preparation and skill,” Fried urged.

One such issue is the harsh fact that the current administration is prosecuting Americans who attempt to provide humanitarian aid to immigrants, refugees, and asylum seekers.

Earlier this Spring, the Department of Justice brought criminal charges against Scott Warren, a volunteer leader with the group No More Deaths/No Más Muertes. 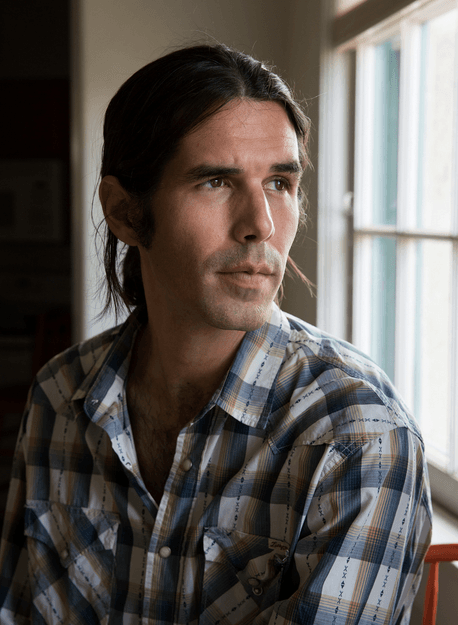 Warren, a 36-year-old geographer who recently completed a PhD from Arizona State University, was charged on three felony counts by the DOJ for providing food, water, and clean clothing and allegedly “harbouring” two undocumented migrants in US–Mexico border region of Arizona. He faces up to 20 years in prison.

Human rights group Amnesty International reported that Warren and eight other volunteers were also prosecuted earlier in the year for misdemeanor charges of littering and trespassing, “specifically for leaving water and other humanitarian aid in desert areas where migrants have frequently died.”

Warren has pleaded not guilty to one count of conspiracy to transport and harbor the two men, and to two counts of harboring undocumented immigrants. His trial began on May 29, and ended in a mistrial on June 6, with a deadlocked jury unable to reach a verdict.

No Mas Muertes and other immigrants rights groups who support Warren say the charges are intended to send a clear message: aiding and assisting would-be immigrants is a crime.

Trump administration officials, predictably, deny this. In an interview with CNN, Nate Walters, the assistant US attorney heading Warren’s prosecution, said the case is, “not about humanitarian aid,” but rather about Warren’s alleged attempt to “shield illegal aliens from law enforcement.”

So far, AWB and other aid groups at the Brownsville-Matamoros border have been able to continue their work without interference.

Despite the many challenges inherent in disaster response work, AWB and others are staunchly committed to supporting border communities in the Rio Grande Valley and beyond. AWB’s most recent Brownsville clinic was held over the July 4th holiday weekend. The group offered it as “an alternative way to celebrate the holiday in service of others,” Tran said.

“In the face of hate, we are choosing to give with love,” she added.

To volunteer with AWB in the Brownsville area for future clinics, contact Tran at transformationshealing7@gmail.com.