On November 10th, two pivotal studies on omega-3s — specifically EPA and DHA — were presented at the American Heart Association meeting, and simultaneously published in the New England Journal of Medicine. These publications revealed the full findings of the long awaited REDUCE-IT and VITAL trials, both of which purport to clarify the clinical roles of omega-3s and, in the case of VITAL, vitamin D as well.

As is often the case with large studies of nutritional interventions for disease prevention or treatment, both REDUCE-IT and VITAL returned mixed results, generating numerous media headlines ranging from negative to overwhelmingly positive. The real story lies somewhere in the middle.

REDUCE-IT, which stands for Reduction of Cardiovascular Events with Icosapent Ethyl–Intervention Trial, involved more than 8,000 statin-treated adults, randomized to take either placebo (mineral oil) or 4 grams of Vascepa, a prescription form of EPA marketed by the pharmaceutical company Amarin. This makes REDUCE-IT the highest-dose omega-3 study ever undertaken in the CVD context. 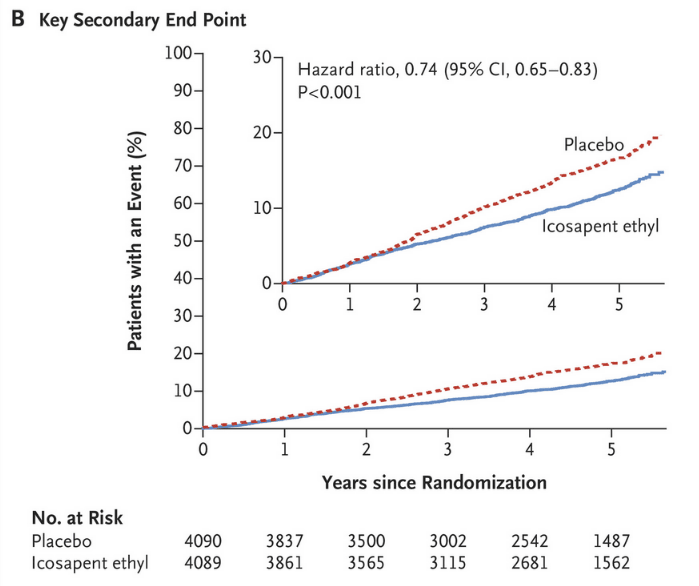 Patients enrolled in REDUCE-IT had baseline LDL-C levels between 41-100 mg/dL (median 75 mg/dL) controlled by statin therapy, but other persistent cardiovascular risk factors, including elevated triglycerides (TGs) between 150-499 mg/dL (median 216 mg/dL). All had either established CVD (secondary prevention cohort) or diabetes mellitus and at least one other CV risk factor (primary prevention cohort). They were followed for about five years.

Vascepa reduced CV events by an impressive 25%, compared with the placebo (Bhatt DL, et al. NEJM. 2018) It also impacted a number of other important endpoints, including:

Amarin, which funded REDUCE-IT, named Vascepa “icosapent ethyl,” which is a variation on “ethyl eicosapentaenoic acid.” It is a drug because it is treated as such by the FDA. The agency’s definition of a “drug” can include any biological (naturally-occuring) molecule that has been purified from its normal source, concentrated, chemically-modified, tested for efficacy in a particular disease condition using FDA study designs, and meeting a raft of regulatory requirements regarding manufacturing, marketing restrictions, etc.

Chemically, Vascepa is simply EPA derived from fish oils that has been converted to the ethyl ester form. It is certainly different from most OTC fish oils in dietary supplements, because it is an ethyl ester, whereas most non-Rx fish oils are in triglyceride or phospholipid form. Vascepa is also highly concentrated, and only contains EPA. This differentiates it from GlaxoSmithKline’s Lovaza, which contains EPA and DHA.

Vascepa is FDA-approved for the treatment of very high triglyceride levels (>500 mg/dL), and has been available for several years. In light of the REDUCE-IT data, the FDA will most likely allow Amarin to expand the label claim to include, “the reduction in risk for major adverse cardiovascular events” in patients 1) on statins, 2) with serum triglycerides >200 mg/dL, and 3) that have some other CV risk factors.

These restrictions come directly from the design of the REDUCE-IT study, which only included patients with this clinical presentation.

“In my opinion, the most likely reason for the beneficial outcomes in REDUCE-IT is that the high dose probably pushed the subjects’ Omega-3 Index values up to near or above 8%–an ideal target range. This was not the case in most other trials with omega-3 studies using lower doses.”

REDUCE-IT lasted for about five years, but the question of how long a patient needs to take Vascepa to obtain the expected benefit is not really relevant to clinical practice. Once a doctor puts patients on it, they’re on it for life….or until their health plans stop paying for it!

REDUCE-IT builds upon the generally positive data from the Japan Eicosapentaenoic Acid Lipid Intervention Study (JELIS) trial published in 2007. JELIS used essentially the same product REDUCE-IT (it is called Epadel in Japan) but at a lower 1.8 gram dose. In patients with pre-existing coronary artery disease, the EPA reduced major coronary events by 19%. In those with no history of heart disease, there was an 18% risk reduction but the difference was not considered statistically significant.

What are the implications of REDUCE-IT for non-Rx fish oil supplements? Can the benefits seen with Vascepa be extrapolated? Here is where it gets dicey.

Strictly speaking, one cannot apply the findings of REDUCE-IT to dietary supplements, even if the latter were given so as to provide 4 grams of EPA in ethyl ester form (which is possible, with some non-Rx products products).

However, nearly every metanalysis on omega-3 supplementation over the last decade has included JELIS in its evidence base. Even the REDUCE-IT authors were willing to bundle data from metanalyses of all other omega-3 products (including non-Rx fish oils) in building a case for the overall efficacy of Vascepa. In this light, it would be rather odd to argue that Vascepa is so dissimilar from non-Rx omega-3 products that the results from REDUCE-IT categorically should NOT be used to support the benefits of fish oil supplements in general.

Is it the dose of omega-3s, or the specific types of fatty acids that ultimately determine the overall effect? This is an important question that cannot be answered until another study assessing the same dose (4 grams daily) of EPA+DHA combined is completed. This study, called STRENGTH, is in the works.  It tests a product called Epanova from AstraZeneca.

Epanova provides EPA+DHA in about the same proportions as Lovaza, but as free fatty acids rather than ethyl esters. Free fatty acids are more readily absorbed than are ethyl esters, so it’s possible that patients in the STRENGTH study will obtain higher blood (tissue) omega-3 levels than those in REDUCE-IT.

STRENGTH will probably finish in about a year. Hopefully it will shed light on the question of whether the presence of DHA helps, hinders or has no impact on the CV effects of EPA.

In my opinion, the most likely reason for the beneficial outcomes in REDUCE-IT is that the high dose probably pushed the subjects’ Omega-3 Index values up to near or above 8%–an ideal target range. This was not the case in most other trials with omega-3 studies using lower doses. The exception to that rule is JELIS where the average Omega-3 Index was above 8% to begin with, and only went higher with 1.8 grams of EPA daily.

The Omega-3 Index measures the amount of EPA and DHA in the blood. The blood levels directly correlate with the amount in the tissues and organs like the heart. The ideal range for the Omega-3 Index is 8-12%. However, most Americans hover somewhere around 4%, putting them at a significantly increased risk of CV death.

STRENGTH will include data on the effects of 4 grams per day of Epanova on the Omega-3 Index. Future reports from REDUCE-IT may or may not.

Prescription omega-3s certainly have their place in clinical practice, and the REDUCE-IT data certainly strengthens the case for Vascepa in high-risk patients.

But the reality is, most people wishing to optimize their cardiovascular health will not need a drug like Vascepa or Epanova. We need to be cautious in extrapolating the REDUCE-IT data to non-Rx omega-3 supplements. But it seems reasonable to recommend that patients eat enough fish or use supplements to increase the Omega-3 Index to at least 8%. For most people, that will require at least 1 gram of EPA plus DHA per day, for the long term.

REDUCE-IT, notable for being the highest-dose omega-3 study ever published, was more or less a home-run for EPA. The VITamin D and OmegA-3 TriaL (VITAL), which stands out for being the largest and most ethnically diverse, was more equivocal.

VITAL followed more than 25,000 people for five years to see if 1 gram of fish oil (Lovaza, providing 840 mg omega-3s EPA+DHA in ethyl ester) alone or in combination with 2,000 IU of vitamin D3 (generic cholecalciferol) could reduce the risk of cancer, heart disease, and stroke in otherwise healthy people.

Among African-Americans—representing roughly 20% of the study’s population—there was a striking 77% reduction in heart attacks among those taking Lovaza. Further, omega-3s seemed to provide the most benefit to those who didn’t eat a lot of fish. These are very meaningful outcomes

But the VITAL report includes several very important and statistically significant outcomes that were missed or downplayed by most of the mainstream media.

Among African-Americans—representing roughly 20% of the study’s population—there was a striking 77% reduction in heart attacks among those taking Lovaza. Further, omega-3s seemed to provide the most benefit to those who didn’t eat a lot of fish.

These are very meaningful outcomes, and one wonders why so many media outlets opted to put a negative spin on their coverage of VITAL.

The VITAL protocol does not include measurement of the Omega-3 Index which is a very different number from the plasma EPA+DHA. However, we estimate that if it had been measured, the average Omega-3 Index would have gone from about 4% to about 6% (roughly a 55% increase). This is still well below the target of 8%.

Lovaza was the first FDA-approved Rx-only omega-3 product. Like Vascepa, it provides the omega-3s in ethyl ester form. But unlike Vascepa, it includes DHA as well as EPA.

Again, we cannot assume that all non-Rx fish oils will confer the same benefits seen with Lovaza in the VITAL study. But 1 gram of Lovaza is very similar to a typical dietary supplement dose, and—like most fish oil supplements—it includes both EPA and DHA. Further, many supplements currently on the market provide omega-3s in ethyl ester form.

I believe it will be much easier to extrapolate the findings from VITAL’s omega-3 arm to dietary supplements than it is with the data from REDUCE-IT.

William S. Harris, PhD, is the president of OmegaQuant, a fatty acid testing lab. He has been researching omega-3s EPA and DHA for the last 35 years. To date Dr. Harris has published more than 300 papers on fatty acids. He also created the Omega-3 Index test, which measures the amount of omega-3s EPA and DHA in the blood. He is also the author on two American Heart Association scientific statements on fatty acids: “Fish Consumption, Fish Oil, Omega-3 Fatty Acids and Cardiovascular Disease” (2002), and “Omega-6 Fatty Acids and Risk for Cardiovascular Disease” (2009) both published in the journal Circulation. He can be reached at bill@omegaquant.com