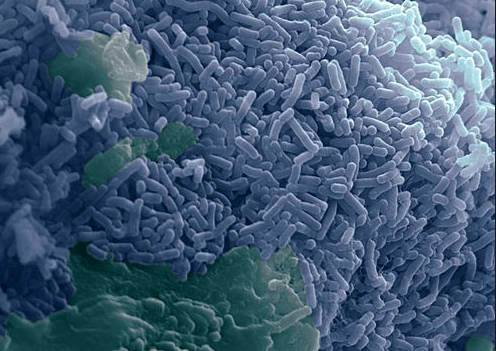 It seems we cannot discuss any health-related topic nowadays without considering the role of the gut and the microbiota contained within it.

It turns out that the gut microbiome—at least certain microbial species within it—also play a role in lipid metabolism, suggesting that some types of probiotics may have heart health benefits.

To understand how this is possible, consider what happens in the duodenum: cholesterol in food enters the duodenum, where it is broken down into micelles by bile acids. These acids are, themselves, synthesized in the liver from cholesterol. The micelles are absorbed partially in the duodenum and partially in the proximal jejunum (Woollett LA, et al. Gut. 2006). The bile acids are then reabsorbed or deconjugated, and this is where the microbiome comes into play.

The first clinical study with NCIMB 30242 was a randomized, double-blind trial with the probiotic given in yogurt form to 114 hypercholesterolemic adult men and women who were not taking statins or other cholesterol-lowering drugs or supplements.

Compared with those taking a “placebo” yogurt, those taking the yogurt with NCIMB 30242 twice daily for six weeks (providing a minimum of 1.9 billion colony-forming units [CFUs] per serving), showed significant reductions in LDL-C (8.92%), total cholesterol (4.81%), and non-high-density lipoprotein (non-HDL-C) (6.01%). They also had an absolute 0.19 mmol/L reduction in apolipoprotein B (Jones ML, et al. Br J Nutr. 2012 ).

The data suggested that the time to reach the peak lipid-modifying effect may be longer than six weeks, an observation that prompted a subsequent nine-week follow-up trial testing NCIMB 30242 against placebo in capsule form.

This second study involved 127 hypercholesterolemic adults assigned to either a placebo or the NCIMB 30242 probiotic, twice daily, at a dosage of 2.0 to 2.9 billion CFUs per capsule. The cohort included some subjects who were on stable statin regimens, but excluded those on other types of cholesterol-reducing drugs or supplements.

A later study by Martoni and colleagues , also at McGill, showed a significant increase in plasma deconjugated bile acids and a reduction in plasma non-cholesterol sterols, suggesting the effects are due, at least partly, to altered bile acid metabolism and reduced cholesterol absorption.

The impact of NCIMB 30242 on gastrointestinal symptoms has also been investigated clinically. In conjunction with the second cholesterol-focused study, Jones and colleagues surveyed GI symptoms using a 93-question self-diagnosis questionnaire for irritable bowel syndrome (IBS).  Much like any human population, minor digestive symptoms like diarrhea, constipation, bloating, and burning were not uncommon in the 127-patient study cohort.

Over half of the subjects in both the placebo and the intervention group had some sort of functional bowel disorders at baseline.

Given that the NCIMB 30242 strain has clear effects on cholesterol absorption, some researchers have raised the concern that use of this strain might reduce levels of vitamin D—a fat soluble vitamin, which, when low, is a risk factor for cardiovascular disease (Kilkkinen A, et al. Am J Epidemiol. 2009 ).

“Rather than decreasing serum 25(OH)D, use of NCIMB 30242 resulted in a 25.5% increase. There was a significant mean change of 22.4% in the active treatment arm as compared to the placebo.”

The McGill group looked at that question in their 2013 trial. Along with assessment of GI and cholesterol, they also evaluated dietary intake and serum levels of vitamin A, vitamin E, beta-carotene, and 25-hydroxyvitamin D (25[OH]D).

Again, much like the general population, many individuals in the study group showed borderline levels of 25(OH)D, with a mean of 30 ng/mL and 27.2 ng/mL in the placebo and intervention groups, respectively.

But rather than decreasing serum 25(OH)D, use of NCIMB 30242 resulted in a 25.5% (14.9 nmol/L) increase. There was a significant mean change of 22.4% (17.1 nmol/L) in the active treatment arm as compared to the placebo. There were no significant changes in the levels of vitamins A, E, or beta-carotene in either group, and no differences between the two groups (Jones ML, et al. J Clin Endocrinol Metab. 2013).

In terms of safety, the McGill researchers included assessment of complete blood counts, comprehensive metabolic panels, and serum lipase levels in their 2012 study They found no biochemical changes that raise concern about the safety of this probiotic organism. The frequency and intensity of adverse events were similar between the active treatment and the placebo groups, with no serious events occurring in either group (Jones ML, et al. Food Chem Toxicol. 2012 ).

Although the existing evidence points toward the positive effects of NCIMB 30242 on bile acid deconjugation and cholesterol absorption, there may also be other mechanisms by which this probiotic affects cholesterol levels, inflammation, and vitamin D status.

It is possible that there may be an overlap between intestinal inflammation, immune function, and cholesterol regulation. Further investigation may shed light on other mechanisms by which gut health and probiotic interventions can affect the progression of atherosclerosis (Hansson GK, Hermansson A. Nat Immunol. 2011; Caesar R, et al. J Intern Med. 2010 ).

Given the widespread prevalence of hypercholesterolemia, functional digestive symptoms, and borderline low vitamin D status, the use of probiotics containing the NCIMB 30242 strain of L. reuteri represents a potentially important and comprehensive clinical tool well worth closer consideration.