Agmatine, a ubiquitous naturally occurring metabolite of arginine, was discovered in 1910 by Albrecht Kossel, the pioneering German biochemist who also discovered the nucleotides that make up DNA and RNA (Kossel, A. Zeitschr Physiol Chem. 1910; 66:257-2611).

Yet, it took more than a century before researchers showed that this unique compound has clinically significant cytoprotective and neuroprotective properties.

Because all of these are complex disorders that result from multiple contributing factors, drugs with isolated mechanisms of action generally do not deliver the desired “silver bullet” effects. In the context of these conditions, an effective therapy must simultaneously target several underlying mechanisms.

Agmatine is biosynthesized by decarboxylation of the amino acid, arginine. However, its physiological mechanisms of action differ widely from those of arginine.

In theory, agmatine exerts its salutary therapeutic effects by affecting, potentially synergistically, all of these multiple molecular targets. Think of it as a ‘molecular shotgun’. 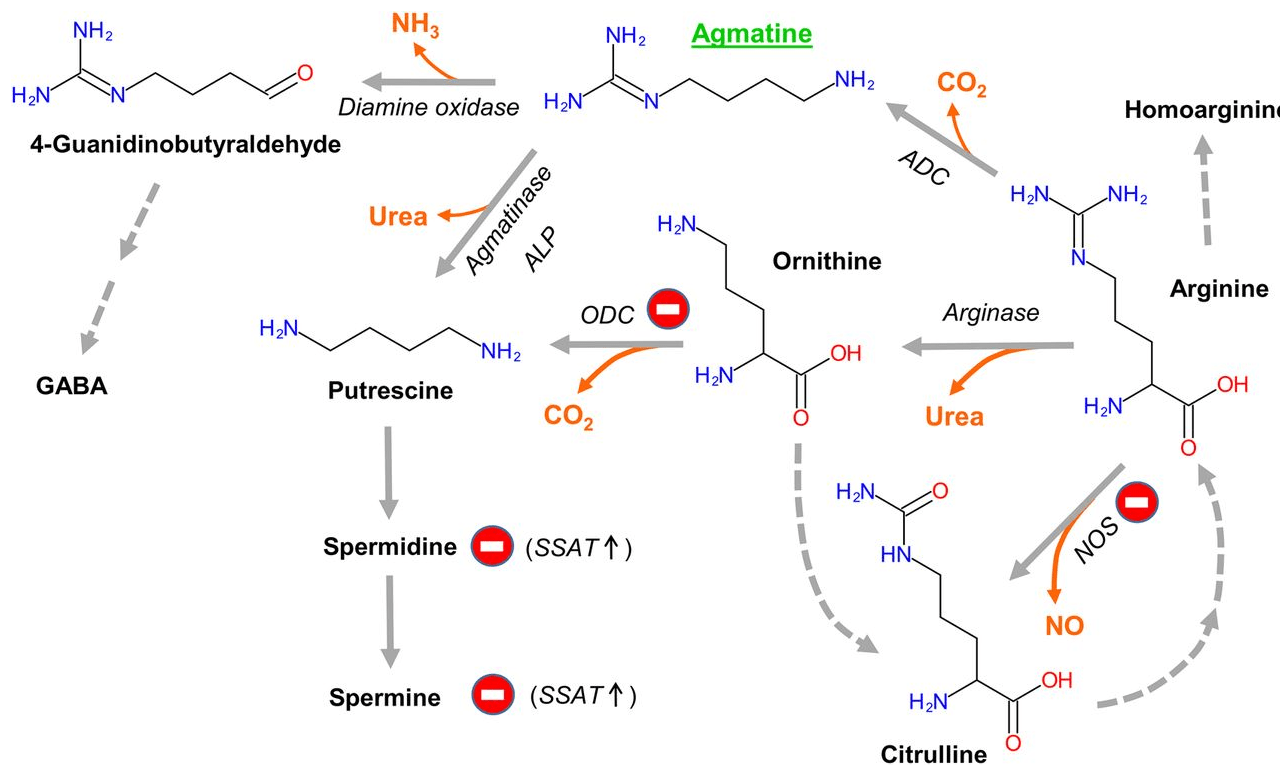 While agmatine is synthesized in the body, it is also acquired from the diet. It is found in low amounts in a wide variety of plant-, fish- and animal-derived foods. Additionally, many gastrointestinal (GI) bacteria produce agmatine. The significant concentrations of agmatine found in the mammalian GI tract implicate microbial production as the main source of systemic agmatine (Galgano, F. et al. Front Microbiol. 2012; 3 (199):1-7).

Agmatine sulfate, the commonly used salt form of agmatine, is absorbed in the GI tract and then rapidly (within minutes) distributed throughout the body, including the brain. Ingested agmatine is readily absorbed and eliminated–unmetabolized–by the kidneys with an apparent blood half-life of about 2 hours (Piletz, JE. et al. Drug Disc Today. 2013; 18(17-18):880-893).

It is principally metabolized into urea and putrescine, the diamine precursor of polyamines, which are not only essential for cell proliferation, but also for viability of mature cells in general, and specifically so for nerve cells.

Agmatine-derived putrescine may also serve as a minor precursor for the neurotransmitter GABA (γ-aminobutyric acid). Additionally, agmatine can also be oxidized and secreted by the kidneys (Piletz, JE. et al. Drug Disc Today. 2013; 18(17-18):880-893).

Recent human clinical trials have shown that long-term treatment, over periods of years, with high doses of dietary agmatine sulfate (1,335 to 3,560 mg/day) is safe, and lacking adverse effects (Keynan, O. et al. Pain Med. 2010; 11:356-368; Gilad, GM and Gilad, VH. Cell Mol Neurobiol. 2003; 23:637-649). These studies have ushered in the notion that agmatine could potentially be useful as a nutraceutical for various forms of neuropathy.

It is estimated that over 20 million people in the US suffer from some form of neuropathy (NIH, NINDS, 2018. https://www.ninds.nih.gov/Disorders/Patient-Caregiver-Education/Fact-Sheets/Peripheral-Neuropathy-Fact-Sheet).

Effective treatment for neuropathy remains elusive despite decades of research. Existing drug treatments are of limited efficacy and have serious adverse effects. Moreover, these drugs do not address the underlying molecular processes that trigger the nerve damage.

Sciatica is a common neuropathy, which affects approximately 1% to 2% of the population, and results from nerve damage caused by pressure on spinal lumbar nerve roots. Various types of traumatic insult may be the initial cause, which manifests as sensory (e.g., pain and numbness), autonomic, and/or motor malfunctions.

A randomized controlled trial published several years ago (ClinicalTrials.gov Identifier: NCT00405041) suggested that agmatine supplementation can offer some benefit for patients with sciatica (technically termed “herniated lumbar disc-associated radiculopathy”). The researchers randomized sciatica patients to agmatine (2.67 g per day for 14 days) as an add-on to conventional treatments, or to a placebo add-on.

The sciatica trial is a proof-of-concept study suggesting that compared with conventional drug therapies alone, agmatine confers benefits that lead to superior outcomes.

Drug therapies are seldom effective and can cause serious side effects. The pathology of SFN is common to several other types of peripheral neuropathy, including: diabetic, chemotherapy-induced, and cryptogenic (idiopathic) neuropathies.

Though there has yet to be a definitive clinical trial looking at agmatine as a stand-alone therapy for sciatica, SFN, or any other form of neuropathy, the available evidence suggests that it has potential as an adjunctive therapy that can significantly improve upon the outcomes obtained by drug treatments alone.

Given the limited efficacy of currently available pharmaceuticals, the emergence of agmatine as an add-on is a welcome addition. It is very safe, has a broad spectrum of potentially beneficial molecular mechanisms, and holds promise of being effective in other complex disorders of the nervous system.

Gad M. Gilad received his Ph.D. in neurobiology and behavior from Cornell University. His research focus is on nervous system responses to stress, neurotrauma and neurodegenerative diseases (molecular mechanisms of nerve cell survival and death, and neuroplasticity), and the development of new therapeutics. His collaboration with Varda H. Gilad, has published over 100 peer reviewed scientific papers and obtained several patents. One of their main discoveries is the neuroprotective properties of agmatine. Dr. Gilad is the cofounder and CEO of Gilad & Gilad LLC, a health science company based in Henderson, NV. The Company manufactures and markets G-Agmatine® (proprietary brand of agmatine)-containing nutraceutical supplements.