Results of the long-awaited Vitamin D and Omega-3 Trial (VITAL) —one of the world’s largest and most ethnically diverse prospective nutrition trials—have cast a long shadow on the so-called “sunshine vitamin.”

The data indicate that daily supplementation with 2,000 IU per day of vitamin D—with or without a prescription fish oil–has little effect on the incidence of major cardiovascular events or invasive cancers.

Funded by the National Institutes of Health, and involving nearly 26,000 people who were followed for an average of five years, VITAL is a primary prevention study designed to answer the question of 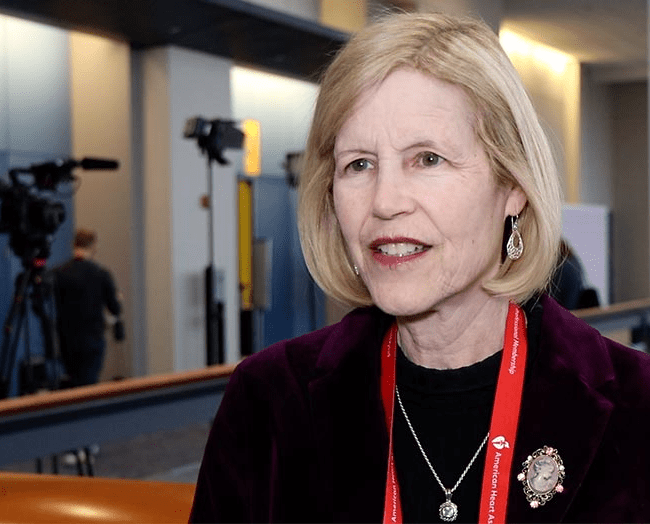 whether treatment with Omega-3s (EPA and DHA as Omacor), vitamin D3 (cholecalciferol, provided by Pharmavite), or both, could reduce the incidence of cardiovascular disease or cancer.

Though the outcomes for omega-3s were mixed (see, Two Landmark Studies Shed New Light on Omega-3s for CVD Risk Reduction), the findings for vitamin D are largely negative.

“Overall, we don’t think everyone should be started on either high-dose vitamin D supplements or fish oil,” said lead author JoAnn Manson, MD, an epidemiologist at Harvard’s Brigham & Women’s Hospital, who presented the VITAL findings at the American Heart Association’s annual scientific sessions in Chicago.

“There are many people already taking these supplements. We did not see significant side effects or adverse events. We don’t think there was any clear reason, based on the findings, for everyone to stop doing what they’re already doing, if they’re taking fish oil or vitamin D. However, we’re not recommending at this point that people begin to take these supplements,” Manson said in an interview with MedPage Today on site at the conference.

Using a two-by-two factorial design, VITAL randomized 25,871 healthy people—51% female, 20% African-American, and with a mean age of 67 years–to one of four treatment groups: 2,000 IU vitamin D plus 1 g Omacor; the vitamin D plus a placebo fish oil; the active Omacor plus a placebo vitamin D; or a double-placebo.

The study participants had no history of cancer (except nonmelanoma skin cancer) or cardiovascular disease at the outset, and all participated in a 3-month placebo run-in prior to being assigned to one of the four treatment arms. The patients had to agree to limit their use of vitamin D supplements—including multivitamins—to 800 IU per day.

During the 5.3-year median follow up period, there were a total of 805 people who’d suffered major cardiovascular events (myocardial infarction, stroke, or death from CVD taken together); with 396 events among people on active vitamin D (3%), and 409 among those on placebo (3.1%). 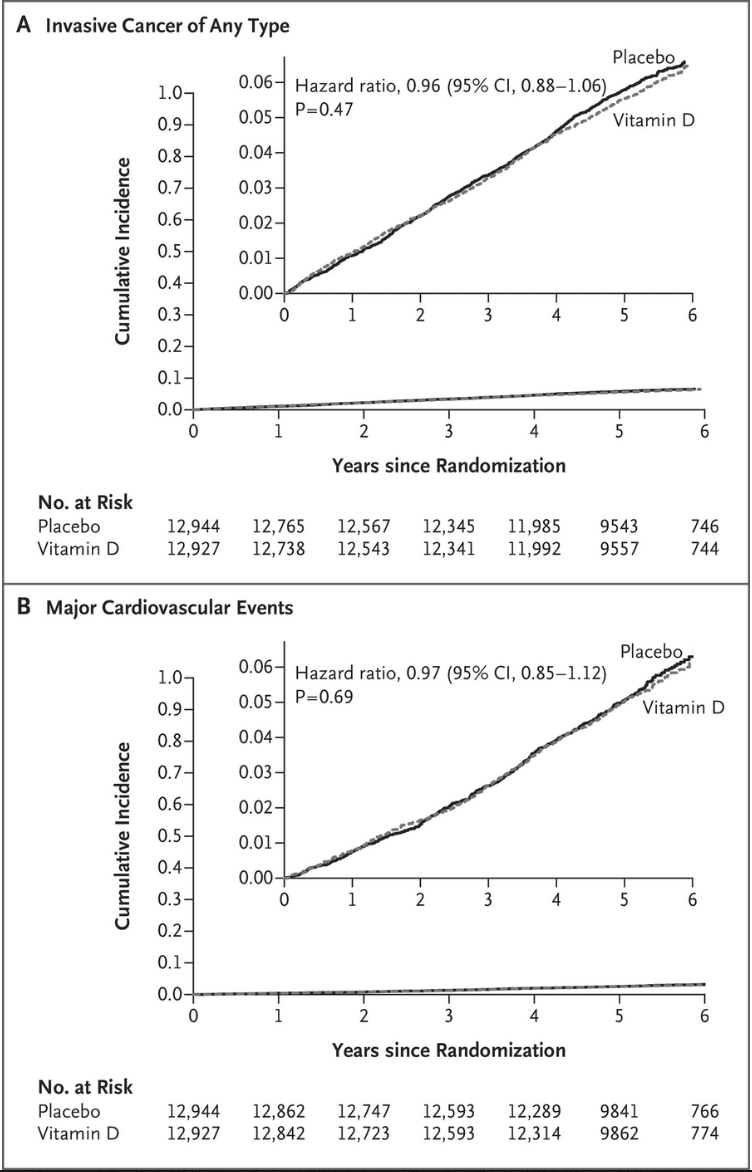 The small difference—13 cases—was neither statistically nor clinically significant. Likewise, there were no meaningful differences on any of the individual CV endpoints (Manson JE, et al. N Eng J Med. 2018).

In terms of cancer incidence, there were 1,617 study participants diagnosed with invasive forms of cancer during the 5-year follow-up: 793 cases in those taking vitamin D (6.1%), and 824 in those on placebo (6.3%).

The presence or absence of the omega-3 drug had little impact on the effect—or lack thereof—of vitamin D on either CVD or cancer risk.

Though vitamin D gave no meaningful reduction of cancer incidence, the VITAL authors did report a statistically significant 17% reduction in the hazard ratio for death from cancer.

“With vitamin D, we saw a signal for a reduction in cancer death, which has been seen in other trials as well, when they’ve been looked at in a metanalysis. The benefit of vitamin D may be more in reducing cancer death than in cancer incidence, if it affects the biology of the tumors and makes them less invasive, and less likely to metastasize,” Dr. Manson said in the MedPage interview.

The absence of preventive effects cannot be attributed to inappropriately low vitamin D dosing or to poor absorption.

Among the 15,787 participants who had blood samples that could be analyzed, the mean baseline serum 25-hydroxyvitamin D level was 30.8±10.0 ng/mL (77 nmol/ L). In most cases, this reached or exceeded 40 ng/mL (100 nmol/L) among the people taking active vitamin D for a year. Among those taking a placebo vitamin D, there were no meaningful changes in serum levels.

Approximately 13% of the study participants had baseline vitamin D values below 20 ng/mL—which would meet the widely accepted definition of deficiency. Roughly one-third of the subjects (32.2%) were in the suboptimal range of 20-30 ng/mL.

While baseline serum values did vary considerably by age, gender, race, ethnicity, and BMI, these variables had little bearing on the primary outcomes. Though vitamin D raised blood levels among those who were deficient, this does not confer any significant benefits in terms of reducing CV events or new cancer diagnoses.

The surge of interest in vitamin D over the last decade has been driven largely by epidemiological and observational studies showing that people with the lowest serum levels had the highest risk for heart disease, various types of cancer, and overall poor health.

Taken together, previously published prospective studies of vitamin D interventions generated equivocal findings, but some of them were positive enough to convince many people—and a significant number of physicians—that vitamin D was a low-risk and relatively low-cost preventive measure well worth trying.

In an editorial accompanying the VITAL papers in the New England Journal of Medicine, authors John F. Keaney, Jr, and Clifford J. Rosen, note that, “In the past decade, the numbers of persons who supplemented their diets with fish oil increased by a factor of 10 and with vitamin D by a factor of 4. But any long-term health benefits from these products remain in doubt.”

That notion that vitamin D can prevent cancer and CVD has been under attack recently, in both scientific and consumer media. Last summer, the New York Times published a high profile critique of Dr. Michael Holick, one of the world’s most visible—and vocal–vitamin D researchers.

The article, by Liz Szabo, ignited a media firestorm by painting Dr. Holick—a Boston University endocrinologist and key player behind national vitamin D testing and supplementation guidelines—as a purveyor of bogus science motivated by commercial interests. Szabo describes Holick as a vitamin D extremist whose zeal for the vitamin has been the main driver behind its market ascendance.

It is true that the vitamin D test is the 5th most common lab test covered by Medicare, and that sales of vitamin D generate nearly a billion dollars annually. It is also true that Holick has received sizeable grants and consultant fees from a number of pharmaceutical, nutraceutical, and lab testing companies. But that is hardly unusual among leaders in medical academia.

The VITAL findings will, no doubt, bolster Holick’s critics, and reinforce the notion held by some physicians that vitamin D and fish oils—and by extension, all nutritional interventions—are worthless.

Steven Nissen, MD, a Cleveland Clinic cardiologist who has been critical of dietary supplements, “fad” diets, and on occasion pharmaceuticals (he was among the first physicians to call out a link between COX-2 inhibitors and elevated CV risk), sees the VITAL trial as an important remedy to misguided medical thinking about the role of vitamin D.

“At the end of the day, the results now reported show that vitamin D did not reduce the risk of cancer and did not reduce the risk of heart disease. As many of us feared, this cult of vitamin D use turned out not to be an effective approach to preventing disease. And it’s a warning, that this widespread use of dietary supplements without good scientific evidence can lead us to make mistakes.”

Why didn’t vitamin D deliver on the potential suggested by epidemiological studies?

It may be simply that epidemiological correlations—however compelling they may appear—cannot be taken as evidence of causation. Just because low vitamin D status consistently correlates with a number of diseases does not mean that low vitamin D is a causal factor for those diseases, or that supplementation will be preventive.

Dr. Manson and the VITAL authors take a nuanced view of this question. They suggest that one reason for the lack of net effect may be that the majority of people in VITAL already had fairly high vitamin D levels at baseline.

“In observational studies, the 25-hydroxyvitamin D levels associated with lowest risks tend to be above 30 ng/mL (75 nmol/L) for cancer (at least colorectal cancer) but between 20 and 25 ng/mL for cardiovascular disease. Thus, vitamin D requirements for cardiovascular health may have already been met for most participants,” they write. “It remains possible that a trial involving persons with extremely low vitamin D levels (i.e., well below the 20 ng per milliliter recommended for bone health) would show stronger effects on risk.”

That said, they question the feasibility and the ethics of any study designed to maintain people in a vitamin D–deficient state and circumventing appropriate clinical care for years at a time.

Manson and colleagues note that their observed lack of CVD benefit from vitamin D is consistent with prior intervention trials, particularly the Vitamin D Assessment (ViDA) study published in 2017. This study of over 5,000 New Zealanders showed no difference in cumulative incidence of CVD between people given monthly bolus doses of 100,000 IU and those who got placebo (Scragg R, et al. JAMA Cardiology, 2017).

They also acknowledge that VITAL’s 5-year follow-up—though certainly longer than that of many prospective trials—may not have been long enough. “Detection of a decreased rate of death from any cause, if present, may require longer follow-up.”

The VITAL has many strengths, especially its inclusion of women (more than half of the participants) and black people, for whom the role of vitamin D is particularly important because their sun-induced cutaneous synthesis of vitamin D is lower than it is in pale-complexioned people.

Dr. Manson believes that the observed reduction in cancer deaths among participants taking the vitamin, is a real phenomenon that should not be overlooked.

“Vitamin D may decrease tumor invasiveness and the propensity to metastasize, leading to a reduced rate of death from cancer. Among patients with cancer, higher 25-hydroxyvitamin D levels at diagnosis or treatment have been linked to longer survival,” she writes. The VITAL findings align with observational studies showing that

vitamin D may confer greater protection against death from cancer than against the initial development of cancer. This is particularly relevant for colorectal cancer.

The VITAL authors also add that in their subgroup analyses, the cancer impact of vitamin D varied somewhat with BMI. Among normal weight individuals, those taking the vitamin had lower cancer incidence than those taking the placebo. Among overweight or obese people, the vitamin did not confer any protective effect.

Though this is an interesting signal, Manson and colleagues caution that, “these analyses should be considered hypothesis-generating, in the context of the negative findings.”