Artificial sweeteners can help patients reduce sugar consumption — but new evidence of harm to the microbiome suggests sugar substitutes cause alarming health problems of their own.

A Spoonful of Toxins

In September, researchers at Ben-Gurion University of the Negev (BGU) in Israel and Nanyang Technological University in Singapore published a study in the journal Molecules showing that artificial sweeteners are dangerously disruptive to a healthy gut. 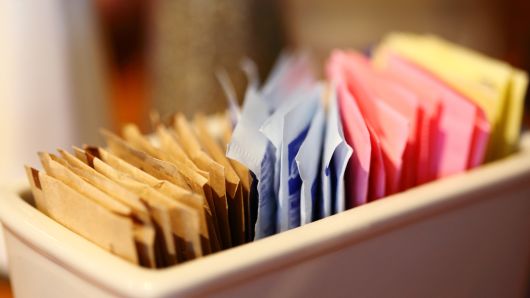 The BGU team assessed the relative toxicity of six FDA-approved artificial sweeteners, identifying toxic responses when bacteria representative of the gut microbiota encountered even tiny concentrations of the faux sugars.

Researchers found that all of the sweeteners and supplements, at varying amounts, exhibited toxic effects on the microbiome. They measured bacterial growth and the luminescent signals each sugar substitute produced, showing that different sweeteners triggered different types of toxicity responses.

Ace-K and aspartame, for instance, induced luminescence only in genotoxic sensitive bacteria (DPD2794), indicating the possible genotoxicity of those two sweetening agents. Saccharin, on the other hand, demonstrated higher cytotoxic than genotoxic effects on gut bacteria.

Concentrations as low as 1 mg/mL of the sugary substances caused gut bacteria to become toxic.

A Warning to Athletes

Toxicity testing of the sports supplements generated similar results. A wide range of commercial electrolyte beverages and other nutritional products aimed at athletes are available to consumers today, and many don’t realize that the majority of these “health” items contain artificial sweeteners.

While each of the studied supplement mixtures contained a variety of different compounds, all included the addition of at least one artificial sugar to sweeten the product’s flavor. The E. coli panel responded uniquely to each sport supplement, but in every case, investigators observed some type of toxicity response.

Owing to the complexity of each individual product, determining whether the artificial sweeteners themselves or some other added ingredient caused the toxic effects was challenging, the authors write. Overall, they argue that the sport mixtures acted primarily by causing damage to cellular membranes.

“While some similarities were found in the cells’ responses to the artificial sweeteners, the complicated sport supplements composition limit our understanding and information about the actual role of the artificial sweetener addition. However, the triggered luminescent and affected growth rates indicate that all tested sport supplements were toxic to the bacteria,” they concluded.

The BGU study is certainly not the first to question the controversial health benefits of artificial sweeteners.

While research on artificial sugars is still somewhat limited, holistic healthcare practitioners generally view non-natural sweeteners with caution. Nevertheless, the use of sugar substitutes is on the rise – and often, patients consume products without realizing that they contain added sweeteners. Artificial sugars exist throughout the food chain as standalone products or, more insidiously, as additives to countless foods, beverages, and supplements.

Ironically, patients with diabetes or obesity often use sugar substitutes as tools for curbing real sugar consumption – but both obesity and type 2 diabetes are more prevalent among individuals who drink more artificially sweetened beverages than healthier alternatives, despite the fact that the sugar-free compounds elicit no apparent insulin response.

A 2012 Crohn’s disease study indicated that the commercial sugar substitutes Splenda (sucralose, dextrose, and maltodextrin) and Equal (aspartame, dextrose, and maltodextrin) promote the adhesion and growth of E. coli, an activator of inflammation in Crohn’s patients. The study’s authors found that in particular, the ubiquitous dietary additive maltodextrin appeared to promote gut dysbiosis, concluding that the sweetener can worsen the health of patients with Crohn’s and other chronic diseases affecting the intestines.

More recently, a 2017 report from the ongoing Framingham Heart Study showed that drinking as little as a single can of sugar-free soda per day is associated with higher risks of both having a stroke and developing dementia. Significantly, no associations were found between the consumption of soft drinks sweetened with natural sugars and stroke or dementia risk.

For those looking to reduce or avoid the use of sugar-free products, a growing number of natural sweeteners can be used instead.

Stevia, extracted from the sweet leaves of the stevia plant, is one popular option. More than 200 times as sweet as sugar, stevia leaf extract provides zero calories per serving and has an estimated glycemic load of zero.

Other naturally sweet substances fall into more of a grey area. Though they come from plant or animal sources, some sugar alternatives are produced synthetically – or may never have been intended for use in the food supply to begin with.

High fructose corn syrup, for instance, is technically derived from corn – but the heavily processed sweetener contains a huge amount of fructose which, if eaten in excess, may contribute to several metabolic disorders.

Trehalose, a naturally occurring disaccharide present in the cells of many non-mammalian species, is also used as a food additive. Insects like bees and grasshoppers, as well as shrimp, oysters, sea algae, sunflower seeds, some mushrooms, beer, bread, and other foods produced by using baker’s or brewer’s yeast, all contain small amounts of trehalose.

Synthetic trehalose is an ingredient added to numerous products, from dried and frozen foods to instant noodles and rice to nutrition bars, fruit fillings, jams, sugar coatings, bakery cream, and processed seafood and fruit juices. It can be tough to avoid – and its silent presence might contribute to huge health consequences.

In a January 2018, researchers published a study in the journal Nature proposing that dietary trehalose stimulates the growth of certain strains of Clostridium difficile bacteria in the gut. A concerning antibiotic-resistant superbug, C. difficile causes infections marked by life-threatening diarrhea and severe inflammation of the colon. The number of reported cases of the illness have jumped significantly over the last two decades, a trend that aligns with the FDA’s granting of GRAS (Generally Recognized As Safe) status to trehalose in 2000, the Nature paper’s authors point out (Collins, J. et al. Nature. 2018; 553(7688): 291–294).

No Better Than Real Sugar

It is important for physicians to consider that, whether or not they recommend the use of sugar substitutes, some of their patients are likely eating, drinking, or supplementing with artificial sweeteners. Ample evidence now supports the position that fake sugars are not only no better for us than real sugar, but trigger major health complications of their own.

Educating people on the ways in which diet affects the microbiome and influences disease risk is an invaluable gift integrative clinicians are well-poised to offer their patients. Healthcare practitioners can teach patients to review food and nutrition labels and learn to avoid consuming undesirable ingredients without their knowledge. Along with patients with chronic illness, athletes who supplement their diet with products to improve physical performance should know the harms associated with nutritional formulas containing artificial sweeteners. The Molecules paper’s authors explain that average consumption of sugar substitutes is higher in athletes, placing them at greater risk for any potential danger.

If the physical health concerns aren’t enough to turn patients off from fake sugar, scientists also now recognize artificial sweeteners as emerging environmental pollutants. Resistant to wastewater treatment processes, the sugary chemicals are continuously re-introduced into water environments, including drinking waters and groundwater aquifers. At this time, it’s unknown how exactly the escaped artificial sweeteners will affect aquatic organisms and ecosystems in the long term.

Until further research clarifies the full public and planetary health impacts of the many different sugar substitutes, patients should approach alternative sweeteners with great caution. Avoiding sugar sounds like a healthy choice — but sugar-free sweeteners really aren’t as sweet as they may appear.